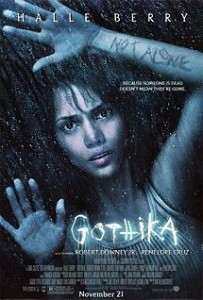 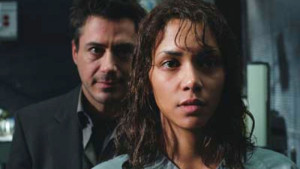 A somewhat predictable mystery that wants to be “what lies beneath” set in an insane asylum.

Gothika is a movie that wants to be an unusual thriller set in a mental institution involving a mystery and ghosts, but it doesn’t quite pull it off. that’s because it is absolutely nothing new. this movie was clearly built around the premise of what would happen if a psychiatrist who worked at the mental institution one day woke up and was a patient locked up inside the place. that one-liner premise wasn’t enough to hang an entire movie on.

We meet Miranda (Halle Berry) as she is working at the institution one night, interviewing a patient, chloe, (penelope cruz). Do you think once miranda becomes a patient herself, she and chloe will be friends? it doesn’t take a genius to stay ahead of this movie on every one of it’s twists and ideas.

the head of the asylum, Doug, is played by Charles S. Dutton, and he also just happens to be miranda (berry’s) husband. robert downey jr. is on hand too, playing pete, another psychiatrist. when miranda becomes a patient, you can bet it will be pete who becomes her psychiatrist. roles change as easy as that in this movie once miranda finds herself on the other side of the glass.

there is nothing wrong with the initial premise of the film, and the idea of waking up in there and not knowing why. but there better be a good explanation down the line. some movies offer the final answer at the end that the character just imagined her professional life, and was really a patient in the institution the entire time, or vice versa. once in a while that works out well, but more often than not it comes off as if the movie is cheating.

Gothika goes another route. it goes for the “what lies beneath,” or “Stir of echoes” idea, or really any other ghost movie out there, and decides to have ghosts in the movie who get into a person and make them do things. once we know that, we can pretty much figure out the rest. miranda killed her husband. that’s why she’s being institutionalized. and knowing that ghosts like to get vengeance on people is enough to help us piece everything else together.

like what lies beneath and stir of echoes, this movie is not only a ghost movie, but a mystery. and also like those others, it tries to keep the villain or the secret until the end. only it does a much worse job of that than the other movies do. even throwing in an extra twist at the end can’t do anything to spice this movie up.

that’s because once we are able to figure out what the twist will be, the rest of the movie becomes about waiting for it to happen. unlike a good mystery, there are no clues that help set the twist up. there is no path to take that will eventually lead the character and us in the direction of the answer. instead, when the movie is ready to give us the answer (ie: when enough time has gone by and the movie is ready to get to it’s conclusion), it just does. without any reason, it has miranda just feel like she knows the place to go looking for something.

the movie has a decent cast, but that doesn’t amount to much with this kind of lousy material. penelope cruz looks the ugliest she ever has before, which is obviously intentional, but also a waste of having such a beautiful actress on board. and downey can’t do anything at all for his role. he’s an actor who is best when he gets to be witty, and a smart alec, like his starring roles in iron man and sherlock holmes. but here in Gothika, he’s playing very serious at all times. that gets him nowhere fast.

the movie is intentionally dark and dreary. that’s meant to establish tone and make this feel scarier than it actually is. it doesn’t work. plot is everything and this movie does whatever it can to try and make us forget that. it wants us to forget that there is nothing going on for at least half the movie and to only remember how it started (with the one-liner premise about her waking up on the other side), and how it ends with a twist.

considering those two things are really all that the movie has going for it, that end twist should have been a hell of a lot better. it makes total sense of course, and there’s nothing wrong with it, other than that we could see it coming a mile away. if miranda killed her husband early on in the film, than there’s got to be a reason. the movie hopes that we forget about that and get so caught up on her life in prison, that we stop thinking about how she killed her husband and that there must be an answer to why. the movie is wrong. Gothika does keep us watching until the end, and it does at least have an enjoyable first and last act, but boy does it get lost in the middle. it also has very little, if anything, new to offer the genre.