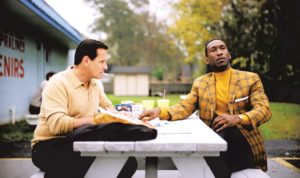 A very funny movie that combines real issues of racial conflict from the sixties with a story about these two men who become unlikely friends.

This is a great little movie packed with both humor and serious storytelling. It’s the most grown-up of director Peter Farreley’s films, and yet it is still packed with great jokes. But the story hits some pretty serious beats as well, as we watch two men form an unlikely bond when a working class Italian bouncer gets hired to be the driver for a black musician. The two go on a road trip through the Deep South, and find themselves entangled in all sorts of racist bouts and conflicts. One situation they go through is more interesting than the rest. And the performances by both Vigo Mortensen and Mahershala Ali really give this thing a unique take of what might have felt like a somewhat familiar story in other hands.

Green Book is a great movie about two men on the road together and the unlikely friendship the form. There’s nothing surprising about where these two end up, or that they find themselves liking each other (just in the same way that the ending to Planes, Trains, and Automobiles wasn’t surprising at all,). But what is surprising is how the movie gets us there. You would think with such a predictable film, we’d lose interest or feel like we were watching something way too familiar. But in the hands of these powerhouse performers, we are absolutely captivated and glued to the screen with both interest and laughter.

There are really three men responsible for this one. The two obvious ones are the actors, and we’ll get to them in a moment, but there’s also the director, Peter Farrelley. This is the first movie he’s done as a solo act (it used to always be the Farrelley Brothers, behind movies like Kingpin and There’s Something About Mary,) but with this movie he’s giving us something very different. Those other films were sometimes funny, but more often than not the Farrelley Brother movies turned out to be pretty dumb, (From Me, Myself, and Irene to The Heartbreak Kid to Stuck on You.) They weren’t exactly sophisticated comedies.  But with Greenbook, Peter Farrelley has graduated to a new level. There’s plenty of comedy here, but it’s smart comedy unlike anything we’ve seen from him before, and it works.

Now most of the credit for that will go to actors, and they definitely deserve their share. Both Mahershalla Ali and Vigo Mortensen have been nominated for Oscars, with Ali being the favorite to win. Meanwhile, Farrelley was left off the directors list. It seems like these days getting into the nomination category for director is one of the hardest hardest nuts to crack. Just look at Bradley Cooper getting snubbed for A Star is Born and Ben Affleck (a few years ago,) getting snubbed for directing Argo. But st least they got the actor nominations right, (as well as a best picture nomination for the movie,) because with this one these noms are definitely well-deserves.

Vigo Mortensen plays Tony Lip, a bouncer at the Copacabana, New York’s hottest night club, back in the sixties. The movie opens by showing us a little about what he does. When one guy gets disrespectful to the girls working there, Tony has him tossed. And when a gangster shows up with a hat that he wants the cost check girl to guard with her life, Tony gets right to work. He steals the hat, sends the cost check girl home, and then later that night, shows up at the gangsters poker table to pretend like he found that hat, and had to fight off some guys to get it back, (he’s got fresh bruises and marks on his face from the guy he tossed out of the club.)

We get to see a couple of other scenes like this, that really help establish Tony as a character, including a hot dog eating contest, and the clever way Tony tells his wife the results. And we all see Tony’s reaction to having black people in his house. When he wakes up one morning, there are two black handymen fixing the sink, while a ton of Itskisn guys are packed on the couch watching a football game. These guys are Tony and his wife’s friends and family, and the reason they’re over is because they didn’t want to leave Tony’s wife, Dolores (Linda Cardelini,) alone with the black guys.

And just in case we start thinking that it’s just those guys on the couch who feel this way, and not actually Tony, himself, the movie covers its bases with that one too. When Tony sees Dolores give the black handimen something to drink, he waits until they are finished and then tossed the glasses they used into the garbage. He’s just as rascist as his friends, and little does he know, he’s about to get s job working for a black man.

The job is the be the driver. Only Tony will never admit that he’s working for the musician. Instead, he tells everyone that the record company hired him, and that’s who he works for. And as far as Tony is concerned, the job is mostly just driving Dr. Shelby around, making sure he doesn’t get into trouble, considering that they will be driving through the Deep South. Tony makes it very clear at the interview, (which takes place above Carnegie Hall where Shelby lives,) that he’s not ironing clothing, picking up laundry, or polishing shoes. He’s not a butler, he’s a driver, and that’s it.

And yet, despite these comments as well as others (like “we had two colored guys over last week for drinks,”) he still gets the job. Apparently Dr. Shelby has asked around, and Tony’s name has come up a number of times. So now they hit the road, and at first it’s about them bonding (and not bonding with each other,) just trying to figure things out. This is where the fried chicken comes in, as Tony introduces Shelby to the food. It’s where Shelby starts helping Tony write letters to his wife they sound like poetry. And it’s where Shelby catches Tony stealing a jade stone and makes Tony put it back.

Their problems are about to get a whole lot worse. From bar fights to police harassments to numerous scenes of segregation and racial conflict, the journey these two are on is filled with all kinds of bumps and road blocks. Dr Shelby plays in private houses and restaurants, and is constantly surprised by the rules they have there. In one of those houses, he is forbidden from using the restroom and told he must go in the outhouse. In another spot, he is told he cannot eat in the restaurant with the guests he will be performing for and entertaining that evening. And none of this is negotiable.

The journey might end in a place that is expected, but they way these characters get there is not predictable at all. The movie puts them on a clock, trying to make it home by Christmas Eve so that Tony can be back at home that night, with his family. And the final drive doesn’t exactly go as one might expect. It’s just one more notch under this movie’s belt in terms of storytelling. There’s so much to like about this movie, and by far one of the best of those things is the performances. Vigo Mortensen has never been better (and that includes in Eastern Promises, another Oscar-worthy performance.) But here, he has to sell us on a character who seems more comedic than serious, and he has to use what sounds like cliches (the heavy Italian accent, use of his hands to speak, and things like that,) and convince us that this is for real. And he does. Meanwhile, Mahershalla Ali has to convince us that this upper class musician from New York is in conflict with himself over where he belongs in society, (white-black, straight-gay.)  All of this conflict comes together with these perfect performances to give us one hell of a movie.