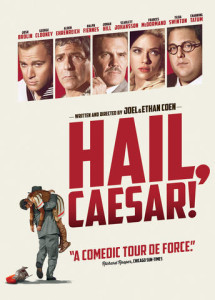 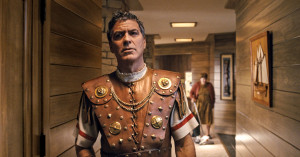 Like all Coen Brothers movies, this one gets better with each additional viewing, as you can look at the film in it’s entirety, knowing where it will be going, and understand each of the carefully constructed moving parts.

Another smart and funny film from the Coen Brothers, these two are absolute masters of their craft. In this movie, they take on old Hollywood, and do it by way of multiple plot lines that are connected only by one character. That would be Eddie Mannix, the studio fixer, who is out to keep everything balanced and orderly. He’s out to keep the actors happy and the studio happier. The movie has him jumping through hoops in order to do that, from a kidnapping situation, to a fish out of water actor who is thrown into a film where he just doesn’t fit, to a likable sweetheart whose reputation is at risk. The movie has Mannix scrambling around trying to handle it all. The result is a lot of fun.

Hail, Caesar! is the newest movie by the Coen Brothers, and just as is with all of their movies, it takes multiple viewings to really be understood or appreciated. These guys are artists who paint on a grand scale, meaning the first time you watch a movie of theirs, you are just trying to see where the plot goes. You try to compartmentalize it, and see where it fits among other stories and movies you’ve previously encountered. You may even feel unsatisfied due to a lacking climax or abrupt ending,  (like in No Country For Old Men.) Just wait. One more viewing should be enough to solve that problem and reveal both the humor and true craftiness of what is really at play here.

Hail, Caesar! follows this very same usual Coen Brothers movie viewing situation. As always with their films, it’s a movie about a crime. Only here, the crime is merely one, out of three, key plot lines in the  movie. This is a film about a Hollywood fixer. He’s from the golden oldie days, (the 1930s) of Hollywood cinema. And solving the kidnapping to get his movie star back makes up just the first of the problems that he will be dealing with today.

The fixer is Eddie Mannix, (Josh Brolin.) He represents the old Hollywood, where actors knew what their jobs were and that they were being paid to represent and promote an image. One could say that Eddie Mannix’s job is really to keep the actors in check if any of them attempt to step out of line. And quite often, they do. Between Mannix and his behind the scenes handling of the stars, this feels like something out of the great Coen Brothers film Barton Fink. But that movie told just one story about a screenwriter, whereas this one tells three or four. I suppose you could consider (in a hypothetical cross pollination world,) that Barton Fink, the writer, might have been one of the talents that Mannix had to control. Hail, Caesar! tells the story of four others.

When we first meet Mannix, he is busting into the private residence of a photographer who is snapping photos of a scantily clad, prominent young actress. He takes the actress out of the photo shoot, smacks her around a little, and throws some money at the cops who show up, hoping they will leave him alone. Mannix even comes up with a fake name and story to give the actress, which she is then able to use with the cops, who think they recognize her.

That actress story was simply an introduction. The real important talent pool of actors and actresses is about to come. There’s Baird Whitlock, who is doing a sword and sandals Roman Empire picture. Then there’s  Hobie Doyle (Alden Ehrenreich,) the cowboy who is thrown around by a studio that wants to change his image. There’s also DeeAnna Moran (Scarlet Johansen,) Americas sweetheart, doing a synchronized swimming movie. And lastly we have Burt Gurney, (Channing Tatum, ) doing a tap dancing sailor movie.

And each of these characters has a unique situation for Mannix to deal with. In the case of Baird Whitlock, it’s the kidnapping. The actor has been drugged and taken from his trailer on the studio lot. Now Mannix finds himself getting letters of ransom and demands for money, from a group that calls themselves, “The Future.” He needs to get his client back, fast, before anyone in the media can figure out what’s going on, and put it out there, in the papers.

In the case of Hobie Doyle, the problem is that the director of this classy ballroom movie, called Merrily We Dance, (Laurence Lorentz, played by Ralph Fiennes,) doesn’t want to work with him. Doyle just can’t say the lines the way that Lorentz wants. The interactions between the actor and director are hilarious. Between the improper saying of the lines, and the way that Doyle keeps getting the director’s name wrong, (is it Laurence or Mr Lotentz?) we get some very funny moments. And Mannix’s job is to speak to the director and calm him down about working with this actor, who is clearly out of place on this film.

With DeeAnna Moran, there’s a potential scandal that Mannix needs to address. She is pregnant and unmarried. In face, she isn’t seeing the father anymore, and isn’t even entirely sure just who the father is.  Considering the whole world  thinks she’s innocent and sweet and has fallen in love with her, Mannix can’t let the truth get out.  So he looks out for her reputation and comes up with an elaborate scheme to pretend the baby belongs to someone else and then have Moran, later on, adopt it. This idea is completely ludicrous, and the Coens are smart enough to merely propose it, without actually pursuing it. They take an idea just far enough, to where if it went any further, it would be dopey, and then they stop, knowing their boundaries.

Mannix spends the movie going from place to place dealing with these situations. He also deals with two reporters who are twin sisters (both played by Tilda Swinton,) and want to uncover the truth about what Mannix is hiding. The fact that there are two of them, and that they are twins, makes everything about the situation funnier, because it’s like every time Mannix turns around, one of them is right there, sidling up, trying to get something out of him.

As a comedic piece, this movie is pretty strong. The situations are funny and ridiculous like only the Coen brothers could do. These guys know humor, and they know what areas to push and what areas to hold back on. This might be one of their stronger movies in a while. The multiple plot line avenue definitely works. None of these individuals plots would be strong enough for an entire movie, but together, they amount to a free deal of fun. Burt Gurney is the actor who gets the shirt stick, when compared to those others, but there’s a good reason for that one too, which is revealed at the end. Once again, the Coens have turned out a smart and funny film. These guys really can do no wrong.