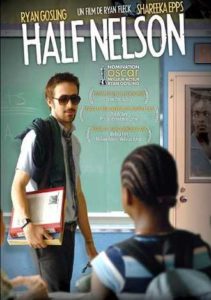 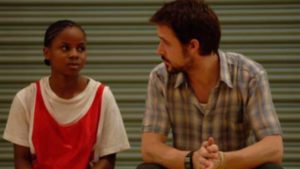 It’s definitely interesting and different, but with no clear conflict or resolution, there’s just not enough.

This is a unique and fascinating movie. It’s an indie film in every sense of the word. That means a quiet, low key story, a tiny budget, and some major shaky-cam filming going on. But it’s the characters who really get our attention. There’s the teacher, Dan, and his student, Drey. Dan is a history teacher, but he’s also a drug user. Drey is the student who is trying to navigate through a difficult life, including the potential to become a drug dealer. The way their stories intersect at different times is pretty entertaining. But the movie does feel lacking in terms of climactic scenes, where the films sets them up, but then doesn’t show us the follow-through. There’s a good movie here, but it could have been better.

Half Nelson is an interesting movie. It’s something different. Here is a movie about a teacher by day and drug addict by night. It’s also the story of what happens when he is caught doing drugs by one of his students, who he is particularly close with. The setup and premise here are pretty creative. The  problem is that the movie doesn’t really go anywhere, or at least it doesn’t go as far as we would like. There’s no clear resolution of any kind, and even the conflict isn’t as great, or as clear as it should be. This movie wants to be an indie film so hard that it uses shaky-cam (a hand held camera,) for the entire film, and boy does this camera shake. Let’s just say it can never actually stay still. And that’s indicative of what happens in the story here, because the movie is so hung up on being different that it makes sacrifices in order to accomplish that, (such as not showing us climactic moments,) that it would definitely been better off letting us see.

At the start of the movie, we meet Dan, (Ryan Gosling,) a middle school history teacher who has his own approach to teaching. He teaches about conflict and opposing forces and relates well to the young, tough kids in the class. The only problem is that he’s not following the curriculum. He’s making it all up as he goes along, or just teaching the way he wants and the way he believes is right. This gets him into some hot water with the principal, who treats Dan like one of the kids, (making him spit out his gum when he’s talking to her, for example.) But Dan does get through to the kids and teaches in a way that captures their attention, and to him, that’s the most important thing of all.

At home, however, Dan is a mess. He has problems with cocaine and doesn’t seem to want to make any change about this. He talks about rehab, and how that has worked for some people, (such as his ex-girlfriend,) but he tried it once, and it didn’t work for him. When his ex-girlfriend shows up to a basketball game, that Dan is coaching, he gets a little more depressed than usual. He rejects her offer to go out for a drink, and then does cocaine in the locker room.

This is where his student, Drey, catches him. Apparently the scene of her catching him in the bathroom stall was Ryan Gosling’s idea, but you can’t really imagine what the movie would be without it. It’s one of those pivotal scenes that really drives the rest of the film, so something like this had to be in the screenplay the whole time. The only consideration is that maybe she was going to catch him somewhere else, such as in the classroom, and Gosling had the idea to do it in the locker room / restroom area of the gym. When Drey catches Dan, he’s a mess, curled up into a ball sitting on the toilet. The two of them continue on with their lives for a little while, pretending like nothing happened, but pretty soon they start develop a friendship.

We start to spend more time with Drey, (just like Dan is,) and learn about her life. Drey lives at home with her mother, who works all the time as a police officer. Her mom tries to set the right path for Drey, full of high morals, but she is rarely around to check on her daughter or help out. Even still, she tries to have conversations with Drey about what’s going on with the girl, and is repeatedly turned down. And Drey has a lot to be sad about. Her older brother is in prison for selling drugs. And Drey has no father in her life. So she turns to two different father figures… Dan, her teacher, and Frank (Anthony Mackie,) the local drug dealer who her brother used to work for.

There’s a pretty obvious connection between Dan and Frank. Dan does the drugs and Frank sells them. Dan has an addiction and Frank has a business. They are on opposite sides of the industry,  and both are bad influences for Drey. Dan knows who Frank is, and doesn’t want Drey to spend time with him. Drey, meanwhile, has questions for Dan about his drug habit. Dan refuses to answer them, and completely ignores the subject. But Dan does tell Drey that he doesn’t want her spending time with Frank. That guy is no good for her to be around, and there are a handful of scenes where Dan even steps in between them, offering to give Drey rides and such, so that she doesn’t have to get in the car with Frank.

The conflict between Dan and Frank escalates to one semi-climactic scene where Dan shows up at Frank’s house. He tells Frank to stop spending time with Drey. Frank laughs at the demand, knowing who Dan is and that Dan is being a pretty clear hypocrite with this remark. Then Frank offers Dan to come sit down with him and have a drink and Dan agrees. That’s all we see of the scene. It’s like what Heat would have been if we only saw Al Pacino pull DeNiro over and ask about going for coffee, and then never got the scene of the two of them in the cafe. The scene drops the ball in a number of ways. First, it doesn’t show us the two of the sit down that follows, (which is the more juicy part,) and second, it is totally anti-climactic. If it had ended with a fight or something exciting, then it might have had more resonance. But this movie is so determined not to be cliched that it misses the idea that a movie needs a climax.

Meanwhile, Dan’s life is falling apart all around him. With work, he is called into the principal’s office for a meeting about how he is still not following the curriculum. We get to see the start of this meeting and then it abruptly cuts out. Like the scene with Frank, we want to see more, and don’t get it. And then there’s Dan’s romantic prospects. He has a date with one of the teachers in his school earlier on in the film, and then later, when things are getting bad for him, he shows up at her door in the middle of the night and forces himself on her.

We see towards the end of the film that another teacher has come in to replace Dan, and can only assume that Dan has been either fired or put on leave. But why not let us see that? What not let us see the exciting scene between Dan and his principal where she kicks him out? Or between Dan and Frank, following Dan making demands? The film thinks that omitting these things is artistic, but in truth, they leave the audience with an empty and unsatisfied taste.

Luckily, there is somewhat of a conclusion to this film. Drey ends up on a pretty dark path and so does Dan, (both of them succeed and fail at the same time as the other.) The scene where she finds him unexpectedly for a second time is the closest we get to a climax. It’s not enough. Especially when the movie gives us the setup for those other scenes, telling us that they are happening, but then not letting us see them. There are some pretty creative and unique ideas here, and this is definitely an interesting movie, but it could have given us more.