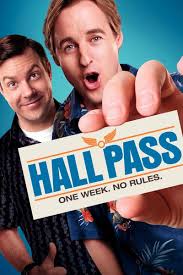 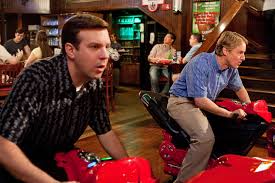 The Farreley Brothers are a duo of comedy directors who try to push the boundaries with how offensive their movies are. They don’t go overboard, say, the way John Waters does, but they do try to surprise and shock, if only for a brief moment at a time. These boys hit their peak with directing in the late nineties with three movies that showed them getting better and better. Dumb And Dumber was okay, but then came Kingpin which was great, and their crowning achievement (at least in popularity), was There’s Something About Mary. I still like Kingpin better, but both are undoubtedly good films. After the nineties, however, they lost their mojo. First on the downhill slide were I, Myself, and Irene. Then stuck on you. Then The Heartbreak Kid. And now, Hall Pass.

The movie’s plot is so simple it borders on being elementary. These guys have nothing but sex on their minds and their wives get some advice from a woman friend / doctor / author, that if they give their men a hall pass, the guys will get it out of their system. The girls ration that their husbands think they are all that and can get these really hot girls, but truthfully they can’t, and so when they realize that, they’ll come running back. It will be like a wake-up call that what they have in front of them is actually pretty great.

So the girls do it. They tell their husbands that they each have a hall pass, good for one week. The girls go and stay with one of their parents, off in another state, and the guys check into hotels. The idea there is that they don’t want to bring strange women back to their own homes, which are covered with photos of their wives and kids. They don’t want to dirty their homes with that, or risk the possibility of these women knowing where they live and maybe wanting to come back, after the hall pass has expired.

So now the mission has begun. And like American pie or any teenage guys who are horny movie, the mission is really just to get laid. It is bare bones simple. The guys meet up with their friends who are really just spectators, showing up to watch these clowns try out their games. And at this point, so far, the movie has been pretty decent. Nothing great has happened, but the humor has all been about the guys pushing their wives with these levels of stupidity, to give them the hall pass. Once they get it, however, the excitement doesn’t really start, like it should.

These guys should have been going after chicks straight out of the gate. They should have made it a competition, who could get laid first. Then they would set rules, like no ugly chicks and then maybe get into a debate over what constitutes an ugly chick. In the end, they would settle on one of their friends as an impartial judge and every time they would be talking to a girl from this point on, they would really be looking to the other side of the room to watch if their friend approved. It would get to the point where they would get tired of wasting their time with girls the friend didn’t approve of, and instead would just sit next to the friend, watching girls coming in, and asking him right then or there, yes or no, hot enough or not?

That would have been fun. A real movie about the comedy of trying to pick up chicks. Instead, these two bozos get drunk and stuffed at a bar with their male friends and can barely move out of their chairs. And the next day they go golfing and eat a bag of pot brownies. It ends up taking days for the “challenge” to even really begin and that is not what anyone going to see this movie signed up for.

I suppose that is meant to be part of the humor. That these guys talk a big game, but when it comes time to performing, they don’t really execute. by about day 3 or so, things start happening. I like the way the movie tells us what day it is, by using black screen subtitles as well as that creepy law and order music. once the pursuit begins, it is just mediocre material. Wilson joins a gym to get close to an Australian girl from the coffee shop and Jason Sudekis finds the mom of Wilson’s babysitter. none of it is especially creative or funny.

Meanwhile, we also spend time with the girls as they pursue men as well. I’m not sure I completely understand this approach to a movie that should have been all about the men and their attempts to reclaim bachelorhood. from Swingers to The Hangover to Wedding Crashers to Superbad, none of these movies follows women characters as an alternate story to the men. the women are major parts of this movie whereas the other major characters really should have been the friends of the guys. those friends appear in about two scenes and should have been in the movie a lot more. that’s because the friends could have added to the humor of the scenes with the guys. the fat guy, for example, only has a few scenes, but makes everyone of them count, especially his day on the golf course. we could of used more scenes like this.

the first part of the movie, leading up to the hall pass issuing, is by far the best. nothing amazing happens in it, but at least these guys get to act like idiots and we get to see the women’s reactions to how dumb their husbands are. In one of the funnier scenes, they are getting a tour of a house and sneak away from the tour to make sex jokes about the married couple who owns the house. the married couple then invites everybody they are showing around into a secret camera room where they listen in on the men’s conversation. that’s pretty funny, but even more funny is watching their wives yell at the men during the car ride home. if it was watching the couples separately in two different cars, it would have been no fun at all, but watching the two men next to each other in the back seat, getting tag teamed by their wives in the front seats is a lot of fun. the movie isn’t very good and misses a lot of opportunities where it could have been better, but every now and again, it has a funny moment in there.