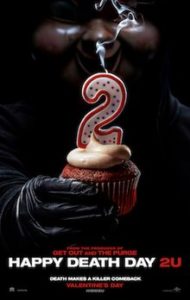 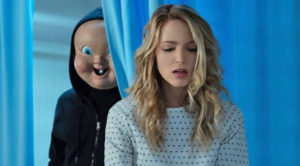 The time travel / time loop / alternate timeline premise is pretty cool, but other than that this one is a bit of a mess with more confusion than cool mystery like the first one featured.

Here’s a movie that has run out of ways to push the original idea from the first movie, (and considering it’s Groundhog Day-like premise, they’ve already exhausted all possibilities for that one day,) and so instead, they go in a totally different direction. This one is about an alternate timeline where the character is again reliving the first day of the original movie, only now things are very different. And this film isn’t really about reliving that day, as much as it is about exploring the new timeline and all of its changes. So not only has the story changed, but the genre has changed too. We’ve gone from horror to sci-fi. And unfortunately it doesn’t work. The cleverness is out the window. Instead we get ideas that don’t make any sense and weak attempts at humor. The first movie was a bit of lightning in the a bottle, meaning they got lucky that it worked so well. This second film doesn’t even come close.

Happy Death Day 2 U is the sequel with one of the greatest movie sequel titles. Unfortunately, that title is the best thing about the movie. So let’s take a quick moment to talk about why it’s so good, (since it will be one of the few moments during this review where something is deserving of a compliment.) First, it incorporates the two in a way that is always pretty neat for titles to do, but rarely very logical. A perfect example is 2 Fast 2 Furious. If it wasn’t forgetting the number 2s in there, the title would never have been Too Fast Too Furious. And so, that one’s not great, because it only really works on one level (the number 2s.) But here, Happy Death Day, which is a reference to Happy Birthday, works the twos in perfectly. Happy Birthday To You. Happy Death Day 2 U. It’s a great title. Okay, now let’s get on to the actual movie.

This one really drops the ball from where the first movie left it. That first film was a giant fluke. Who would have thought that a horror movie about a serial killer in a baby mask, on a college campus would be any good? But it was. By using the Groundhog Day premise of  waking up every morning to the exact same day, and putting it into a horror movie of being murdered again and again, that first film was able to get a lot out of the idea. There’s just one problem. By the time it is over, we’ve exhausted that day so much that there really isn’t any place for a sequel to go.

And this follow up movie actually has a pretty good idea. It recognizes that there were some sci-fi elements in that first film that just never were addressed, and decides to use this second movie to address them. And so the second film becomes more about the sci-fi time loop, alternative timeline situation than it does about the serial killer horror movie. It’s nice when a sequel doesn’t repeat the same beats as the first film, but to change genres entirely is very strange. And as much as the movie deserves credit for trying to be fresh and creative and original, it most definitely does not work.

At the start of the film, we are with the boyfriend (Carter’s) friend, Ryan, from the first movie, as he wakes up in his car. Ryan was a very tiny role in that first film. He had one scene that kept getting repeated, which was really composed of one action and one line. And luckily this movie doesn’t do what it makes it seem like it’s going to do… make Ryan the star of the film. This movie is at least smarter than that. Yes, for the first five to ten minutes or so of the movie, we are with Ryan as he goes through a whole day and then wakes up again to relive the entire thing, beat for beat, (aside from Groundhog Day, there’s also a Final Destination element to this storyline too, where in that movie we saw a whole twenty minutes of a character’s life, the character died, and then those exact same twenty minutes started again.)

So Ryan is the one experience the Deja Vu day repeating. And he bursts into the room where Carter and Tree (the protagonist from the first movie,) are making out on the bed. It is the morning after from the first film. The day before was the day that kept repeating. Ryan tells them about what he’s going through, and Tree knows all about it. She knows what Ryan is experiencing and wants to get to the bottom of it. And somehow that leads them to Ryan’s lab, where he is working on a time portal machine. And here’s where the movie starts getting pretty heavy with the sci-fi stuff.

So there is a killer who is trying to kill Ryan, and we find out about halfway through the movie, (maybe not even) who it is. Let’s just say it makes no sense at all. The only thing that comes from it is that the characters realize they screwed something up with this time machine and have to fix it and go back in time to do things differently. Basically, there are two Ryans (as you can see in the trailer,) and this is because of something they did. So now Tree goes back to the day before, the same day that we saw again and again in the last movie. And all of that is fine. In fact, it’s kind of cool to see her relive that day again and for her to be the star of our movie again. But the problem is what this means for the storyline of this film. First of all, Ryan doesn’t really have a killer at all, which makes absolutely no sense. And if he does, than how that killer got there or what that killer is doing there makes no sense.

But even worse is how much things have changed for the day before. So the idea here is that Tree is now living this day as an alternate reality. That means that Carter is dating her friend from the sorority house, her roommate is no longer a killer, and her mom is still alive. These ideas sound good on paper, but when you think about the logic to any of it, all of them are completely ridiculous. Let’s take the mom for example. Sure, it’s cool that her mom is still alive, and a nice wrinkle in the plot, but her mom died three years ago. How can anything that they did in the last day or two have implications that could effect what happened three years ago? The movie will say things like “the butterfly effect,” but they’re hoping we think that means anything can be affected by anything and it doesn’t have to make sense. And it kind of does. But it doesn’t mean that affecting things now can affect things from three years ago. That’s where the movie goes too far.

Carter dating the friend is another thing that’s kind of annoying. How? Why? We don’t get any answers for how they got together or how this makes any sense. The movie just wants us to go with it. And worst of all is the idea that the roommate is no longer a killer. I don’t care if she’s acting as innocent as possible, if I’m Tree, I am never trusting this girl again and always looking over my shoulder when she’s around. But what it means is that we are back in the same day and events as the first film, (which means the killer in the hospital is still escaped, and someone has still set him free,) only now it’s no longer the roommate.

Aside from the story not working here and being more complicated and head-scratching than it is cool, the jokes aren’t really working either. In the first movie, this were actually pretty funny. Tree’s reactions to everything happening around her were humorous. Here, all of that is gone. This movie goes for cheap laughs that are often so bad they are eye-roll worthy. We’re talking about lines like, “you’re dumber than a rock,” and “well, a rock can’t be dumb because it doesn’t have a brain.” We’re talking about an attempt at slapstick where the sorority friend pretends to be blind and walk around a room while she repeatedly hits the Dean over the head with her walking stick. And then, when she thinks he’s not looking, she goes sprinting around the room, sits down next to a chess game and shouts, “Check mate.” This is beyond dumb.

Once in a blue moon, there is something funny, like Tree running into the guy who wants to know why she’s not responding to his texts, and her shouting out, “You’re gay,” as she runs by. But for the most part we are being given one dumb scene after another. The characters go to a basketball game because “there’s safety in numbers,” only to find out that nearly everyone is wearing the baby mask to support the team. There’s the mother story and the moments she shares with Tree, that are extremely boring. And then there’s the decision that doesn’t make any sense at all. Tree has to decide if she wants to stay in this current timeline where her mom is still alive, or go back to the old timeline where she can be with Carter. It’s a no brainer to choose her mom. Well, not for her apparently. And the movie makes it even dumber then that. She tells Carter all this, like “if I choose that other timeline than we can be together.” Well, why can’t they just be together now? Especially if she’s telling him all this. It’s just one more thing that makes no sense at all. Oh and the twist about who the killer is… not the least bit interesting or creative. This movie deserves a little credit for trying the alternate timeline thing, but it sure doesn’t work, and changing genres turns out to be a big mistake.