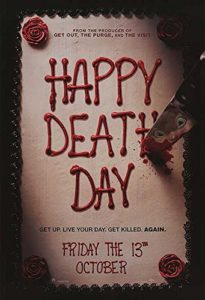 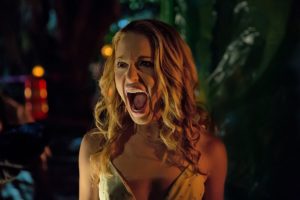 A funny, creative, and entertaining horror movie of sorts.

What a fun idea. Nobody is going to claim this movie is brilliant or anything, after all it is a college student horror film about sororities and dorm rooms and dating, but considering that setting, they do something pretty smart with this one. They take the Groundhog Day premise, about reliving the same day again and again, and every morning waking up to the exact same morning and situations, and it puts a horror movie spin on that. The horror movie spin is that this  character, Tree, is being murdered each night by a guy in a baby face mask (the college team mascot.) So Tree has to figure out who is killing her, and make some changes in her life in order to stop this day from keep repeating again and again.

Happy Death Day is a creative and fun horror movie. It takes the premise of Groundhog Day, (waking up every morning to the same day and having to relive the events,) and puts a horror movie spin on it. That spin is that the main character, Tree (say what you want about the name, but it’s certainly memorable,) is killed each night by a murder in a mask. The mask is that of a giant baby. It’s the mascot of the college team where she goes to school, and so the mask is actually all over the campus. That gives Tree one less clues she can use to find the killer, and it also leads to some pretty fun scenes for us, where we never know who the killer is, and who is just wearing the mask to support the team.

The movie starts with Tree waking up on this first day. We follow her from the dorm room, where the guy she wakes up next to, (Carter, doing his best impression of Topher Grace,) is trying to keep it down so as not to wake her. Tree doesn’t know where she is at first or who this guy is that she’s waking up in the same room as. And she’s got a splitting headache. She gets some aspirin from Carter and has an interesting surprise from the roommate, (a kid who basically has only one line in the movie, but makes it funny every time.) All these details matter, because we will see them again and again, and each day it will be just a little different. So when Carter can’t find the aspirin some days, for example, Tree knows exactly where they are.

All of this works. In Groundhog Day it worked because of the humor that could be associated with us seeing the same events unfold a little bit differently, and also the protagonists extreme reactions to them. The same thing happens here. Tree is a blast with this situation. She is in a sorority house, and so has tons of interactions with different characters from the roommates who bakes her a cupcake, since it’s her birthday to the sister in charge of the sorority who calls a meeting at lunchtime, to the chubby sister who gets food for lunch that the other girls call out and look down on. It’s all fun.

Aside from the sorority house, Tree has plenty of other things going on in her life. There’s the guy who went on one date with her (where he took her to Subway of all places,) and now wants to know why she’s not responding to his texts. There’s also the professor that she’s having an affair with, despite him being married. This guy works at the hospital where Tree’s roommate works, which definitely comes in handy, giving us opportunities to see both characters at the same time. And then there’s a situation with her dad and the death of her mom, that makes up the backstory for this character, and is explored more and more as we get further into the film.

What’s also fun is the way that Tree tries to solve her murder and by doing so learns a little more about each of the other characters.She spies on the different people she has come across that day, during a lively montage, and we get some great comedy out of it. The kid who has been texting her, for example, she catches doing something very unexpected. And at one point, she’s even hanging around the campus at night, hiding behind a bush, wearing night vision goggles. It’s all good, meaningless fun, and it’s entertaining. This movie is more fun and funny than scary and that definitely works to its advantage.

Since it is Tree’s birthday, after all, at one point her sorority sisters throw her a surprise party. What’s funny about this is that it only happens one day, and not every day like those other more minor events. Maybe that’s because in most scenarios she doesn’t even make it to the surprise party, and ends up murdered before she can even get there. On the night of the party, we see the guy who Tree is hooking up with, who is also desired by the girl  who is the head sister of her sorority. And we get a pretty funny situation where he’s wearing the mask, but so is the killer, and Tree can’t always tell who is who.

Speaking of that sort of thing, some of the surprises and reveals could have been handled a little better. When Tree finds the mask in a character’s drawer, for example, you know she’s going to suspect this character and that the only way he’s going to get out of it is if the killer comes up behind him and kills him. And that’s exactly what happens. Now some movies use this technique to their advantage, having the actual killer seemingly get killed, therefore taking them off the suspect list. We’re talking about movies like Scream and And Then There Were None (based on the classic Agatha Christie book.) But this movie isn’t one of them. So what? It’s small potatoes, when so much of what this movie is doing is working.

One thing pretty cool about the story here is the way that it finds new angles and plot points to explore as it goes on. The problem with making a movie like this, where you are repeating the same day again and again, (and another movie that used the premise nicely, only for an action – alien story is Edge of Tomorrow,) is that it can get tiring. Obviously the ideas are going to become repetitive, that’s the whole point, but the challenge is to find ways to still keep them fresh. The idea then, is that since the protagonist has been through these things before, every day she will be handling them a little differently and learning from her mistakes. And this movie definitely has her doing that. It also has her making new discoveries, like an interesting  angle about a patient in the hospital who might have more meaning to the story than one might have thought.

This movie uses it’s premise nicely to go for comedy. Sometimes when Tree dies, it’s nit even at the hands of the killer, but just because of being at the wrong place at the wrong time. And sometimes, just like in Groundhog Day, it’s her killing herself, knowing full well that she’ll be coming back. Sometimes it’s even in order to save other characters that died that day. If the loop closes and the day is permanent, then these characters will remain dead. But if she resets it (by dying herself,) then things will go back to how they were that morning.

The idea that it’s more comedy than horror since no character is really ever dead, helps this movie keep us interested. We want the deaths, sure, but we also want the security blanket that allows us to appreciate the craziness of this whole thing and the comedic angles that come with it. In some ways, this story is more sci-fi than horror (and apparently the sequel takes that concept to the next level, exploring alternate timelines and things like that.) This movie definitely has some flaws, but you don’t go into a film like this expecting it to be super smart. You go in for the goofy fun and with the hopefulness that the movie will give us a fresh take on the genre. This movie most certainly does.