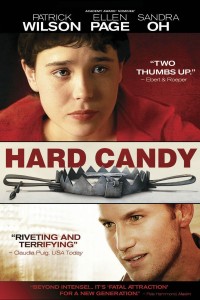 A good movie that is pretty smart in the ways that it builds up to secrets and than reveals them. The problem is that when we are not at a part that is nearing one of the secrets, the movie spends the rest of its time featuring a plot about kidnapping and torture. There’s a great story being hidden from us here, about a girl who disappeared and what might have happened to her, and we really don’t get to find out enough about that. Not the small details of how it might have happened, anyway. Instead, we get a whole lot between our two main characters, Jeff and Hayley, when she kidnaps him and spends the duration of the movie either interrogating or torturing him. If this had played out as more of a psychological movie than a torture movie, it would have been a lot better. As it is, this is a good movie, that could have been great.

Hard Candy is a movie that feels like a play. It feels like a Neil Labute movie, (In The Company of Men, The Shape of Things, Some Velvet Morning,) because of how much it is a character study, featuring only two characters and loads of dialogue. The movie is about two things. Secrets and torture. One of those two elements works and the other doesn’t. The secrets parts are fantastic. We get the sense that there are surprises around the corner that one character is trying to find out from the other one. But then there are all of the torture scenes (calling them torture might be going a little far,) and those are just too long and simple minded.

Labute’s movies are usually about relationships and a secret that comes out. This movie, by director David Slade, is about a crime and whether or not a character actually committed it. The plot threads that hold us in suspense with the mystery, definitely work. We want to know if this guy who is being torturred is someone who we should be feeling bad for, if he actually did what the other character is accusing him of. The movie does a great job of not making the answers to those questions very simple, and instead having the characters jump through hoops just to get to the bottom of them.

The film opens with the conversation online, where we watch the responses between two anonymous characters going back and forth. One of these characters uses a camera as his icon, and both of them seem to be flirting pretty heavily with each other. They talk about doing things to each other, and the movie allows time for pauses as one of them is thinking, before responding. It’s a fairly quick conversation, but it tells us a lot, including that these two characters are about to meet up.

From there, we go to a coffee shop where the two people who were just chatting on line actually do meet, for the very first time. There is Hayley, (Ellen Page, in her breakout performance,) as a fourteen year old girl who seems adventurous and willing to do anything. Then there is Jeff, a man in his mid-thirties, who is a photgrapher of models. They chat a little bit, with Jeff telling Hayley that he can tell she needs more chocolate. Then he buys her a t-shirt that she comments about, with the prospect of her trying it on for him.

The two of them leave the coffee shop and head over to Jeff’s place. Hayley makes some screwdriver drinks for them and asks Jeff to take pictures of her. As he starts, Jeff begins to feel dizzy. Suddenly everything he sees becomes blurry, as he continues to try and snap photos. As it happens, Hayley has drugged Jeff, and when he wakes up, he is tied to a chair. This is where the accusations start. Hayley accuses Jeff of being a pedaphile. He denies the allegations, and yet she calls him on things that have already happened between them, such as “when a teenager tries to make screwdrivers, you say no and take the liquor away.”

Hayley continues to make accusations, noting all of the photos of half-naked young women on the walls. Jeff tries to play it off like this is just his work, but Hayley isn’t buying it. And some of the things Jeff says just help feed Hayley’s argument and dig the hole for Jeff even deeper. For example, he tells her that he really is a photographer and doesn’t just shoot women. He shoots nature and environmental scenes and has been to all these exotic places to take photos. Hayley responds by asking him why none of those photos are on his walls, and the photos of the women are instead.

About halfway into the movie, we get our first big secret. It involves a safe, and where it is hidden, and then the combination, and finally what’s inside of it. Everything surrounding this safe, and discovering its secrets is fantastic. This is where the movie reaches its first high point. Up until now, we don’t know what to make of the situation and whether or not to believe Jeff when he claims that he is in no way a pedophile. For example, before he knew the Hayley was out to get him, when the two of them were still flirting with each other, she asked him if he ever slept with any of his models, and he told her no. He also mentioned waiting for years for Hayley, since she is underage. All things that make him seem like maybe he wouldn’t actually touch her. So we are kind of on the edge of our seats as this safe comes into play and can start giving us some answers that we’ve been wondering about.

But then the movie goes right back to being about torture. Instead of building on the secret, and slowly revealing more, the way it should have, the movie goes back to where it was. Sure, the game is now upped to taking the torture to the next level, as Hayley’s new plan is to castrate Jeff, but still, in the realm of this movie leaning more towards Hostel or more towards a psychological thriller, the film tends to not make a decision either way, and instead just keep going back and forth.

There are some interesting story ideas that come out in the second half, including Jeff telling a story about how he got this way. His story involves a childhood experience that he had with his much younger, four-year old cousin, and how his aunt used torture on him to make him feel terrible about what he had done. Hayley doesn’t take any pity on him. And soon, for the first time, we get other characters who show up, just for brief moments. There’s the neighbor who has Jeff’s girlscout cookies, and then his ex-girlfriend, who Hayley calls to come over.

One thing great about this movie is that there is indeed a climax and a resolution. New secrets are revealed at the end of the movie, and we are left with a feeling of satisfaction, knowing at last that we really have been told everything. So many movies either leave things up to the viewer, or just don’t tell us all that we want to know, and this movie actually handles its ending exactly right. This marks the second big secret of the film, the first being the issues surrounding the safe, and it’s unfortunate that there wasn’t more buildup to these great moments. The movie alternates between torture story and secret reveal story, and it really should have focussed more on one than the other. Ideally, more on the reveal story. There is a girl who went missing, and it would have been great to learn all of the details about that, little by little, as the movie went on.