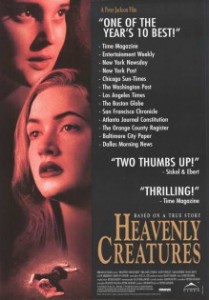 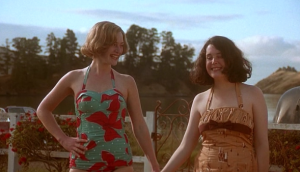 A movie about girls who plan a murder that doesn’t really start to get interesting until the second half.

This is a film about two girls who become friends and then take their friendship to such a level of intimacy that they are willing to do terrible things in order to maintain it. The problem with the film is that it’s really just one terrible thing that they do and it doesn’t come until the last second of the movie. That means most of the film is simply about their friendship, with barely a hint of anything exciting behind it. There are some cool effects here, bringing to life a fantasy story the girls make up by using people who look like they are made of clay. Other than that, however, the movie is pretty dull.

Heavenly Creatures is one of the rare movies where the things that happened off screen, after the movie ended, are more interesting than most of the things in that happened on screen. We get that all the time with beginnings in movies. We get back stories about what our protagonist was like in the old days, and how he used to be a legend, and it often seems like THAT story would be more exciting than the one we are watching at the moment. With the ending, it’s different. It means that the movie ends at the most exciting part, and that we want to see what would happen next.

This sounds like the desired effect of building up to a climax and leaving the audience wanting more, only in this case, it’s not. Instead, it’s a problem. It’s really a situation where this end moment makes it seem like the movie is about to start to get good, and then suddenly, it’s over. Take The Talented Mr. Ripley, for example. Imagine if that film ended with the scene on the boat where Ripley killed Dickie Greenleaf. Imagine if Match Point ended with the thing that Jonathan Rhys Meyers did to get out of his predicament. We want to know what comes after. Those movies showed us. Heavenly Creatures doesn’t.

The movie is about two girls who end up committing a heinous crime. This crime is what ends the film, and it’s a one second act of violence. So we’re not talking about the movie ending with a giant heist or robbery here, but a really quick moment, and nothing more. What that means is that the entire film isn’t really about the crime, but about how the characters got to that point.  Sounds reasonable enough. Only the movie doesn’t even start approaching anything that could possibly lead to a moment like this until about halfway through. And even then, calling the moments “clues,” that might indicate something bad is coming, in the second half of the film, is a strech. Still, it’s a lot more interesting than anything going on in the first half.

This movie is about the friendship between two girls. These two are both misfits and outcasts. Pauline, (Melanie Lynskey,) is a shy, unhappy young lady who doesn’t talk to anyone and keeps her head down at all time. Juliet, (Kate Winslet,) is the new kid in school who makes Pauline raise her head up. She does this by being the first person Pauline has ever met who actually gets her interest and seems worth paying attention to.  Juliet comes into the classroom and reads something from a text, standing in front of all the students in the class. What she reads is incredibly innapropriate and upsetting to her teacher. Yet Pauline loves every minute of it.

Soon the girls start making up stories about two characters in separate kingdoms who have a love affair. They start writing letters to each other, as if they were the characters in their story. This is pretty much the gist of the entirety of the first half. No wonder it’s so dull. In the second half of the film, we actually get to see the characters come to life, and they are made of a strange gray clay. It’s a very cool effect. The movie only uses it a handful of times, and that’s most likely due to the cost of putting such an effect in this low budget independent film. Still, it comes across as effective and pretty neat, even if it doesn’t exactly add anything to the story of the two girls.

In the second half of the movie we also get a situation where Juliet gets sick and has to go to the hopsital for a while, and Pauline begins an affair of her own with a boy who is staying at the boarding house that her parents manage. This boy falls head over heels for Pauline, and she isn’t the least bit interested in him. Instead, she just wants to tell him all about the story that she and Juliet have made up and about how exciting the lives of the characters are. It’s a strange romance Pauline has with this boy, where she doesn’t seem to be listening to anything he’s saying, about how much he loves her, and she doesn’t seem to be listenting to anything he’s saying, about the story of her made up characters. You wonder if either one of them is actually taking any of it in at all. Like, does he even realize she’s talking about characters who are not real, or does he think she is just going on and on about some of her friends?

When Juliet gets out of the hospital, things change. Not in a super dramatic way, where Juliet is jealous of the boy Paulin is seeing or anything of that caliber. That sort of thing would be way too exciting or interesting for this film. Instead, by the time Juliet gets out, the boy is long gone, and now Pauline and Juliet get super close. They start holding hands and doing things together that they never did in the past. They scratch the surface of having a romantic relationship with each other, and this does not go unnoticed by Juliet’s father.

Juliet’s father goes over to Pauline’s house and speaks with her parents. He tries to convince them that something is wrong and unnatural about the friendship between the two girls. Pauline’s parents then take her to a therapist. All of this, as well as some problems between Juliet’s parents, lead to the parents deciding to move Juliet away. She is going to move to Africa to live with other relatives, and both Pauline and Juliet can’t handle this. That’s when the two of them have the idea to kill Pauline’s mother.

Now something doesn’t add up here. It’s Juliet’s parents who are moving Juliet away. So why kill Pauline’s mother and not Juliet’s mother? It makes no sense. And instead of taking us over their plan, and having them work it out and make changes, and things like that, the movie rushes it and gives us the whole climax in a matter of moments. Considering that this is the most important part of the film, you would think that at the very least, there would be an explanation of why they are going to kill Pauline’s mother and not Juliet’s. Is it that with Juliet moving to Africa, Pauline wants to move to Africa too, and her mother won’t let her? Isn’t the problem still that Juliet is moving to Africa, and that this is what needs to be stopped, and not the prevention of Pauline moving to Africa as well? Maybe the point is that these girls are so crazy and warped that they don’t even realize this.

The movie isn’t bad, it’s just slow. Especially in the first half. For a film about a crime, this movie seems to be about everything else besides that. The crime, which would by far be the most interesting part, only comes in at the very final moment of the movie. These days there are movies made about murders and things like that, made all the time, and they are always told in one of two ways. Either we see the murder a little bit of the time, throughout the duration of the movie, or we see it somewhere in the middle, with the second half of the film being about the aftermath, investigation, and consequences. There’s a reason why the story gets told this way. Heavenly Creatures is the movie that doesn’t do it correctly, and the dullness of the film is the result. Luckily there are other things to like about this movie, such as the clay figures and effects, but the storytelling certainly could have been better.