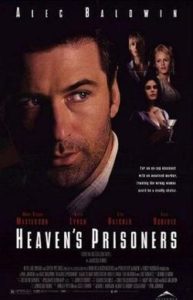 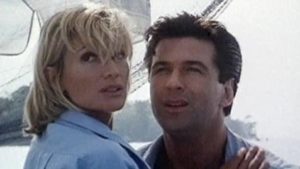 A film-noir of sorts that is very slow and drawn out, and tends to be not nearly as mysterious or intriguing as it thinks it is.

A movie that takes a plot we’ve seen again and again, (a vengeance thriller against three killers, taking them out one at a time,) and finds all the wrong ways to handle it. The first problem here is that the movie acts like there are mysteries to be solved when really there are none. After one question is answered… why the DEA wants to pretend that a guy who was on a plane really wasn’t on it…the movie continues to act like there is more to be solved. There isn’t. And so with nothing left for the protagonist to do, decides to spend his time going around making enemies and starting trouble everywhere he goes, acting as if none of it will ever come back to him. There are so many problems here, including a forced twist ending that is completely unnecessary and doesn’t fit. There are definitely some positives including the New Orleans setting and the likable cast, but for the most part this movie is pretty lousy. On top of everything else, it’s pretty slow.

Heaven’s Prisoners is one of those seedy film-noir, steamy sexual and films made in the mid-nineties. There’s a long list of movies that go on that list including Basic Instinct, Jade, Malice, Palmetto, and Final Analysis. Aside from Jade, Heaven’s Prisoners is among the worst of them. It features a pretty talented cast, a fantastic setting, and a nice back-story for the protagonist, Dave Robicheeaux (Alec Baldwin.) But the story of this movie just doesn’t work. it is too long, too slow, and most of the time just doesn’t feel right. This is the kind of movie that wants us to feel like we should be on the edge of our seats wondering about some kind of mystery, when really there just is no mystery there. In that regard, it’s a very strange situation.

The movie begins with Dave in Church, talking to the Priest in the private booth, giving his confession. He talks about how he is tempted to take up drinking again, but if he does his wife will leave him. Aside from connecting to the title of the movie a tiny bit, this tells us that he’s an alcoholic, that he’s married, and that he cares about his wife. Not a whole lot more. From there, we go out onto a lake where Dave and his wife, Annie (Kelly Lynch,) are in a motorboat, having a nice, relaxing day. She serves him lunch, they start making out, and then a plane comes crashing into the water. Dave jumps in to see if he can save anyone, and ends up saving a little girl.

So we have our big event that launches the story. So far so good. An agent from the DEA (Drug Enforcement Agency,) comes to see Dave and talk to him about the plane he came across. Dave tells him about all the people he found dead in the plane. One of these was a man with a tattoo on his chest, named Johny Dartez. Dave tells the agent of this man, and the agent tells him no such person was found. He tells Dave that maybe he is imagining it. Okay, so now we have a little mystery. Who was this guy and why are they saying he imagined it? Dave does a little investigating by finding a stripper he used to know when he was a cop (Robin, played by Mary Stuart Masterson.) She tells him that Dartez ran drugs for a man named Bubba (Eric Roberts.) The bartender overhears this and calls Bubba’s people, who find Dave and give him a beating.

At the end of all this, Dave meets with the DEA agent again and asks the man why he didn’t want Dave to know that Dartez was on that plane. it is revealed that Dartez was a witness who was working with the cops, and they didn’t want his identity blown. And that’s the end of the mystery. Case closed. Nothing left to solved. Dave should walk away at this point. He really shouldn’t have been investigating the plane to begin with, but if we are to believe that the DEA not wanting him to know about Dartez made him so curious that he just had to go asking questions around town, then I suppose it could be believable. But at this point there are no more questions that we are wondering about. Dave goes to see Bubba (who he went to high school with,) we meet Bubba’s wife, played by Terry Hatcher, in a role that scream femme fatale every step of the way, (whatever sexuality and sensual elements are in this movie come from her, including one and a half nude scenes.)

So far, the movie is just okay. There was a mystery of sorts or a question that both Dave and the audience were wondering about, and it got resolved. Even still, when a plan crashes out of nowhere, we expect a little more. Maybe there are drugs on the plane, or a ton of money (A Simple Plan, No Country For Old Men.) In this movie, it’s neither one. The only thing on the plane, other then the dead bodies is a little girl. So maybe she was the witness to a murder or something. Nope. There is absolutely no reason for Dave to keep making waves around town, and keep poking his nose into other people’s business. And as a former cop, he should know that by now. Don’t mess with dangerous people. Especially when there’s not really much of a point in doing so. Yet Dave goes to see one of the guys who was working for Bubba and beat him up. This is Eddie Keats, (played by Don Stark, the fun-loving neighbor on That 70s Show.)

Dave goes to see Eddie Keats at a bar that Keats owns, and Dave gives him a beating. This is where the movie turns from mildly interesting to pretty dumb. He beats Eddie down with a pool cue. Now, this is stupid on all kinds of levels. First, it’s Eddie’s place. That means you would expect other guys who are friends with Eddie to jump in and fight Dave. And you would expect that Dave is prepared for that. But none of this happens. Even more important is that Dave has no reason to do it. He’s clearly trying to send a message and show Eddie that Eddie should not be messing with Dave. But if he put any thought into it, he would realize that his actions are going to have the exact opposite effect. Eddie isn’t about to accept this beating and then just forget about Dave. He’s going to come back at Dave, out of anger if nothing else. Even if Dave had just attacked Eddie on the side of the road, Eddie would still be coming back at him, but this is attacking a man in his own bar, where Eddie’s reputation and connections are at stake.

So of course Eddie does come back. This time it’s not just with one guy (a man named Toot, who Eddie was with when he beat Dave up the first time,) but with two guys. There’s Toot, back again, and then there’s also Victor Romero (Hawthorne James, coming off his role as the bus driver, Sam, in Speed.) Victor Romero has already paid a visit to Dave’s house and dealt with his family while Dave was not home. That’s important because it gives him a bit of an identity separate from these other guys. At this point we know all three men who come to Dave’s house, and they attack his family while Dave is outside. Dave gets into a fight with Eddie, while the other two men get inside the house and execute Annie.

Say what you want about this movie, but at least it isn’t afraid to pull a major punch like that. Suddenly the stakes are raised even higher. Dave is now out for vengeance. All of that is fine. In fact, it’s kind of cool. Movies where we know the individual members of a group that committed a horrible act, and that our hero will now spend the rest of the movie seeking vengeance on, often work. From Charade (the Carey Grant / Audrey Hepburn movie,) to 52 Pickup to the Crow, this formula is generally pretty good. But this movie wants to use it to the bare minimum possible. That means instead of having a list of three names, and us getting to watch Dave go after all three individually, one of the guys is killed off screen, and Dave really gets to only go after two of them.

And that leads us to one of the dumbest moments of all. Before the final guy dies, Dave asks “who sent you?” Dave literally went to this guy Eddie Keats’ bar, beat Keats up in front of everyone, and somehow didn’t expect Keats to retaliate? The “who sent you,” idea doesn’t need to go any further than that. Keats was humiliated and angry and so he came to Dave’s house and killed his family. But this movie wants to take things further and have a whole other party involved, who hired a hit on Dave. That element is completely unnecessary, but what makes it worse is that Dave seems to know about it. Instead of assuming the obvious, that Keats and his friends just came after Dave because Dave attacked him at the bar, Dave somehow knows that these guys were hired. That someone sent them over to kill him or to kill his family. it doesn’t make any sense.

The ending, in which there is a final twist, feels incredibly forced. So do the scenes where Bubba and his wife go to see a mob boss who is running the show down in New Orleans and doesn’t like how messy Bubba is getting. And speaking of Bubba, there are some pretty dopey names in this movie. Bubba is one, but Toot is another. Eric Roberts is one of the few actors who is actually good here. Roberts is one of those kings of B movies, and so a movie like this is right up his alley. But either he isn’t given enough screen time, or the story is just a little too all over the place, because this one definitely does not work. It’s a movie that wants us to feel like we are in a mystery when really there isn’t much of a mystery at all. There are whole moments where you can tell by the music that we are meant to be on the edged of our seats, anxiously wondering about something, and yet no questions about what we should be wondering about come to mind. This movie definitely thinks it is more than it is. As a Kill Bill style revenge thriller, this one could have worked. As a movie about the finding of a plane, with drugs or drug money, this one could have worked. But as a movie where the main character just keeps making mistake after mistake and angering the wrong people left and right, without ever realizing that this is what he’s doing, the story is pretty dumb.