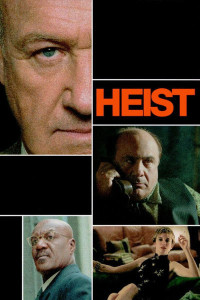 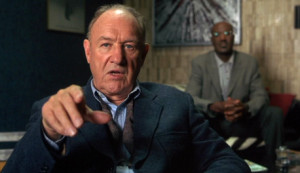 An enjoyable crime caper movie that feels like you’re watching lots of cool and clever twists, the whole way through.

The movie is good because of how much fun it has with these characters who are super cool and completely confident about every move they make. it’s a crime thriller and it’s right up the sleeve of writer / director david mamet. only with this one, he gets a little too comfortable. his characters rattle off one-liners as if they were greek philosophers, being more clever sounding than they are practical ir realistic. the same can be said of the plot. the first half of this movie is good because it is smart, but still manageable. the second half, however, is where things get a little too tricky to really follow. sure, we still have the gist of what’s going on, but it’s just so much more enjoyable when it all actually makes sense.

Heist is good, but not great. it’s a david mamet movie that’s right in his genre, only with this one, he goes a little overboard. it’s like he got too comfortable with the territory and started feeling like it was too easy for him, and as a result, stopped being careful about how the movie turned out. this genre, that mamet is usually so good at, are con game / corruption movies. they’re scam films. his best movie is the spanish prisoner, about a regular guy who gets taken for a scam. his next best film is redbelt, about a guy who also gets taken, only in that film, the guy kind of puts himself into it without realizing what he’s doing. here, in Heist, however, it’s not the main character who is a regular guy getting taken. instead, the main character, here, is the one doing the scam.

that’s the first part of the problem. by having a character who lives in this world of crime and everybody playing everybody else, it gives mamet permission to have his characters talk as cool as anyone ever has in the history of the world. now, we’re used to some of mamet’s characters sometimes talking cool, but in this movie it’s non stop. i’m talking about lines like, “my guy’s so cool, when he goes to sleep, sheep count him.” or, “Nice day for the race.” other guy, “What race is that?” First guy, “The human race.” or here’s another one… Fran: “Stay out of the shadows.” Joe: “Everybody’s gonna be looking in the shadows.” Fran: “Then where’s the place to be?” Joe: “The place to be is in the sun.” What does any of that even mean? Do people really talk like this?

now david mamet is known for his dialogue and for the way characters speak, and sometimes it’s cool, but other times it’s frustrating. he has characters repreat words and phrases, like, “The thing of it is, the thing of it is, you never called. You never called, so I didn’t know.” that sort of thing. he does it a lot in this movie. his wife, rebecca pidgeon is in the film (just as she is in most of his movies), and she handles his dialogue well, but in this movie it just goes too far and gets carried away.

the story is about a guy who does robberies with his team. the guy is joe (gene hackman), and the team includes two friends and his wife, fran (pidgeon). those friends are bobby (delroy lindo), and pinky (Mamet regular, ricky jay.) these are all great actors. aside from them, there’s danny devito and sam rockwell on hand as the bad guys. as the story goes, joe and his team do one last job and then bring the money to mickey (devito), who is the guy that put them up to it. the deal is that they are supposed to split the money, 50-50. only joe got his face on one of the security cameras during that job and is now thinking about retiring.

the reason why that’s a problem for mickey is because there’s another job coming up, that joe is supposed to do, and now he wants out. mickey has already put the whole thing together, including getting the money for it and purchasing the equiptment that will be needed. he can’t have joe backing out. and so mickey decides to not give joe his share from the job they just pulled. that’s the first real conflict of the movie.

it takes a while, but eventually joe comes around. he agrees to the second job, so that mickey will give him the money he and his team are owed, but joe is probably planning on coming up with a reason to back out. when mickey insists that his nephew, jimmy (rockwell), comes along with them, joe starts to get ideas for what that reason could be. he and his boys stage a situation on the side of the road where a cop approaches them and joe handles it, only jimmy nearly loses his cool and pulls a gun on the cop.

the point of that whole thing was to give joe a reason to tell pinky to ditch the car they were using, in case the cop called it in. and then once pinky ditches the car, he pretends to have left his clip board, that has the job written and detailed on it, in the car. so that’s enough to call the job off. the job was all there, on the clipboard, that was left in the car. only none of this works, and the boys have to do the job anyway.

things start to get especially confusing during the job. for one thing, jimmy shows up at joe’s place before the thing goes down, causing joe to think the guy he is dealing with has brought someone else along. joe then pulls a gun on the guy, and blows his deal, only to find out it was jimmy who was in his garage. and the first confusing bit is the question of why jimmy was there, in joe’s garage. did he leave something behind, like he claims? was he there to check up on fran, like she claims? if so, where did that even come from?

the job takes place at the airport, and even though it’s very hard to follow at times, we still can tell that we are watching something cool. joe has some wonderful little tricks up his sleeve, and he pulls them off one after the next. i love the way he gets a gun through security, slipping it in his coffee and then not bringing the coffee through the metal detector. the most confusing parts happen after the job is done, and we have to figure out exactly what happened and how it all went down.

the second half of this movie is where things start to get lousy. it’s the job itself and then everything after it, that just don’t hold up so well. this is where the movie needed to take a step back and start getting easier to follow instead of harder. there are double crosses at the end that don’t seem to make sense, and even if they do make sense, they just don’t feel right. there’s also a climactic action scene that ends in some very unrealistic ways. we get a shootout that results in ways that it never really would. even the very end of the film, where a character is left alive when he never really would have been, just seems ridiculous. the movie was pretty great in it’s first half, but just got way too tricky and twisty and complicated in its second half.