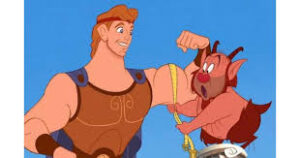 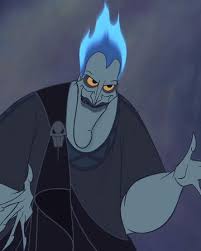 Other than two super talented voice actors, James Woods and Danny Devito, this movie doesn’t have a whole lot to separate it from other Disney animated movies or retellings of Greek mythology stories.

One of the Disney animated movies that is easily forgettable. In the first half of the nineties, Disney was hitting it out of the Park every time (Beauty and the Beast, Aladdin, The Lion King.) Unfortunately, This movie was made in the second half. Which means they were trying to top themselves and in the case of Hercules, forgot that more is not always better. Here we have a movie about gods and beasts and magic, and all kinds of enormous situations, but something feels missing. The personal, relatable touch is not there. The movie is entertaining enough with its great voice work from Danny DeVito and James Woods, but the storyline and emotional investment here are just okay.

Hercules is an okay movie. It’s fine. It’s sometimes even fun. But it is nothing special. There’s something to be said about the negative consequences of going too big, and raising the stakes a little too much. Movies that are grounded tend to get audiences to relate to them a little more. Then again, most classic Disney animated films aren’t grounded and deal with curses, spells, magic, and prophecies. So the fact that Hercules does the same really isn’t the problem. But this movie is all in on the massive scale, dealing with Greek gods, Mount Olympus, the Underworld (basically heaven and hell,) giant monstrous beasts, and immortality. Let’s just say, it’s not the easiest film to relate to.

Hercules is a Greek mythology movie. And there’s a lot there to joke around with, from Narcissus to Pandora’s Box to Achilles (who gets quite a lot of mention in this movie.) Everything is fair game in this movie, and that includes the three blind women who share one eyeball and pass it around. Not what you’d expect to see in a Disney movie, but they make everything silly and light – laying every character for humor, and that helps deflate what might otherwise have been seen as grotesque.

The story here is that Hercules is born to Zeus and his wife (Hera, although I’m not sure her name is said here.) And since he is born of the gods, Hercules is a god too. But Hades, the god of the underworld, wants to rule Mount Olympus (which means rule the world,) and do he goes to those three all seeing women and asks about his plan. They tell him the only way he will not be successful is if Hercules gets in the way. And so Hades sets out to destroy Hercules.

Hades has two monster henchmen working for him (one of them is voiced by Bobcat Goldwaithe.) These two little guys are a big part of the comic relief in this movie. Not that they’re all that funny, but they detail your try. These are the guys that get bopped around over and over again for physical humor. Every great villain has his henchmen (the eels in the little mermaid, la Feu in beauty and the beast, Iago the parrot in Aladdin and the hyenas in The Lion King,) and these two fur balls definitely cover the position. Hades tasks them with destroying Hercules’ immortality.

The way he does this is by giving them a potion that they need to make baby Hercules drink. The only catch is that he has to drink every single last drop. And of course, he doesn’t. Like the Achilles heel story (Achilles was immortal all over, except for one spot – his heel,) Hercules drinks most of the potion, so is pretty much human, but since he never drank the very last drop, he retained his god-like strength. When the henchmen get him to drink the potion, they kidnap the baby from Mount Olympus (you would think there might be some kind of security or challenge with getting up there.) They bring baby Herc down to earth, get him to drink most of the potion, and then run off when an elderly couple comes by. The couple takes the baby home and raises him as their own.

Now we watch Hercules growing up, living the life of a human. Specifically we focus on his teenage years, when he is incredibly strong, but also incredibly clumsy. Nobody wants to play with him or include him because of the damage he can do, and he still manages to do all of that damage anyway. In one very funny scene, he tries to get involved in a game of frisbee with some other teenagers (they call him “Jerkules,”) and he ends Up slamming into a column. This leads to a domino effect that wrecks an entire structure, and sends Hercules crashing into a guy trying to save his fragile clay pots (voiced by Wayne Knight, better known as Newman from Seinfeld.)

This leads to Hercules’ father telling the boy the truth about how the parents found him. He had a necklace with the symbol of the gods around his neck. And now, Hercules sets out on his journey to find the truth. This is very much like Mulan, leaving her family and setting Out to join the army. And first, both characters talk to statues that represent gods or family ancestors (in Hercules it turns happens to be both,) to get a sense of direction for where they need to go.

Hercules’ journey takes him to find Phil (short for Philomedes,) a half man – half goat, voiced by Danny Devito. Phil is the guy who has trained all of the great hero’s over the years, and watches them all end up failing. Some that are mentioned are Theseus, Perseus, and Achilles. The only one who gets explained is Achilles, with his heel. Now that’s a problem for anyone who knows mythology because Theseus and Perseus were not failures (Theseus slayed the Minotaur and Perseus slayed Medusa.) Still, it’s only mentioned once and then all other mentions are of Achilles, so it’s easy to get passed that.

Phil is a pretty fun character. Danny Devito knocks it out of the park with his voice work. So does James Woods, as Hades, for that matter. The two of them are perfectly past, and the best thing about this movie. But the storyline is just okay. Hercules keeps taking on challenges and keeps defeating Hades’ creatures. Yet only one of these is shown in detail – a hydra or many headed creature. All of the others are rushed over in montages. The real story here is about Hercules and his love interest. Her name is Meg, and unbeknownst to Hercules, she unwillingly works for Hades. The god of the underworld has a hold on her, from a deal she made in order to save the life of a man she used to be with. And now Hades has got a claim to her soul. It all feels pretty forced, and is never fully explained. But basically Hercules has to sit out a fight in order to save her soul, while Hades uses giant creatures to attack the gods.

The movie has plenty of jokes, and some very strong voice work. But what it lacks is a great story. Everything happening here is either too simple or too convenient. What should be thrilling and exciting ends up being kind of dull, because the movie never takes it seriously (never goes into detail about anything.) And one thing that definitely hurts is the lack of music. Sure there are the muses chining away like a background chorus group, but there really aren’t any catchy tunes here. The one that is in the movie, “Go the Distance,” is used for background music, more than for anything else. This is by no means a bad movie, it’s just not up to the usual standard of excellence that goes with most of these Disney animated films.