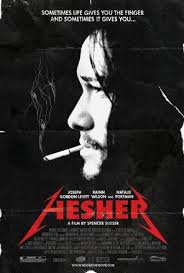 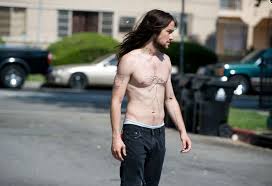 An interesting drama that gets a little too serious at times when it should be sticking with some of it’s black comedy ideas.

Hesher was an enjoyable film, if for nothing else because it was interesting. it kept your attention. Not that anything great happened at any time, but still it’s main character was so unpredictable, that he always kept you guessing. and the funny thing is, when you look back on the movie afterwards, you realize that he really wasn’t unpredictable at all. he was just always an asshole. and we kept thinking that one time he wouldn’t be, and he would come around and do the right thing, but that never really happens. he is who he is, and that’s not about to change. We only think it will because we’ve been conditioned by tons of Hollywood movies that came before it to expect the jerk main character have a change of heart and come around. this is not that movie.

Hesher is the main character and he’s played by Joseph Gordon Levitt. the premise for the film is kind of simple. a degenerate long-haired punk moves in with a family simply by going into their house and sitting down and doing whatever he wants. and nobody gives him a hard time about it. He gets away with it because the kid who lives there tells his father (rain Wilson, Dwight from the office), that hasher is his friend.

the comedy is in the way this guy really does do and take whatever he wants. it is absolutely black comedy because none of it feels good at all. when he smashes up a person’s yard for no reason, there’s humor there, like the way he rides a bike into the pool, but it’s not pleasant. The same can be said of the scene where he defends Natalie Portman to a man who’s car she hit. The man is upset and getting angry with Portman and hasher comes to her rescue. But he turns the tables on the man, pretending that the guy hit Portman and it’s very uncomfortable. We basically feel like Portman does in the scene. We’re glad hasher is there helping out, but we wish he could do it in a better way. like rationalize with the man and calm him down. Hasher doesn’t believe in that sort of thing.

Part of the reason why hasher is able to infiltrate this family so easily without being questioned is because the family is broken. the mom has just died. tragically. we don’t know exactly how for most of the movie, but we know that there’s a car which is somehow tied to her memory. the little boy, T.J. is on a mission throughout the movie to get the car back. it has been impounded and the owner of the lot refuses to sell it or to make a deal. T.J. wants it so bad that he gets into a fight with a kid who works at the lot about it. That kid goes to his school is much bigger than T.J. and has it in for him from this point on.

the ongoing conflict between this bully kid and T.J. fill up much of the plot of the movie. the two kids keep going back at each other. sometimes T.J. does things to the kid and sometimes Hesher does them to make them look like T.J. did. and some are pretty funny, like a drawing stunt pulled on the bully’s yellow car. Hesher is mr. anarchy and he has no problem contributing to the mayhem. but he won’t life a single finger to help resolve any of it. that seems to be his M.O. throughout the film.

but he does change. at least a little. by the end, he’s not only lifting a finger (which is a lot more than he did by the urinal), but lifting a chair and throwing it through a window. the irony is that by that point, t.j. doesn’t need or want his help anymore. by that point t.j. has learned to handle himself and hesher being there only makes things worse.

confucious said that life was a series of relationships. that’s basically the way this movie operates. each different relationship between t.j. and another character is like a different story. there’s t.j. and the bully. then there’s t.j. and natalie portman. he’s got a major crush on her to the point where he practically stalks her at the store where she works. and then there’s t.j. with his dad, dealing with the loss of his mom. and where is hesher in all of this? he mixes in with each of these stories. he’s there to attract portman and to help t.j. fight back against the bully, leading him in the ways of destruction.

Portman is underused in this movie. I love the choice to have her character wear glasses, which underplays her beauty and makes her look in a way that we’ve never really seen her before, but she’s not given enough to do. this chick can act and she needs material to show it. she just won an Oscar this year for black swan. and this movie is lucky it landed her for the role. i love that she’s doing such an indie film as this, but it’s a thankless role that any actress could have done. she needed something with more meat to it. with a little back story or something. she needed a character more like the one she played in garden state. here she only has one interesting bit of conversation, when she talks about how her boss won’t give her longer hours. that’s it.

the driving force of the film is absolutely joseph gordon levitt. you can tell that just from the trailer. he’s pretty good at playing characters like this, which is something i noticed from the lousy movie killshot. levitt was the best part of the film, playing a hot shot young buck and a little too much energy and not enough restraint. his role here in hesher isn’t all that far off.

and then there’s rain wilson playing serious for once. it’s a good move for him, trying something different. unfortunately his character is the depressing force of the film. and it gets worse as it goes on. in the last fourth of the movie or so, the black comedy is all but dropped in exchange for some sadness. It’s not only what happens to the grandma, but also the way we get the final puzzle pieces of what happened to the mom. the movie only really works because the hesher character is so unique. but that charm and unpredictability wears off as the movie goes on. taking such a serious tone for the final portions of the film was not a good move. this movie should have stayed in the black comedy genre and kept things a little lighter. it was enjoyable, but far from great.