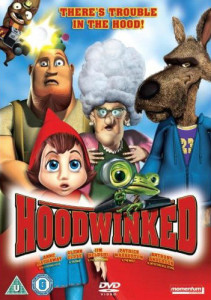 A sometimes cute and clever movie that could have been much better had it gone more for story than for mindless action.

Hoodwinked is a movie that spoofs classic fairy tales. In particular, it spoofs little red riding hood. Sure, there are appearances by other fairy tale characters, like the three little pigs, but at the center of the movie, this is red riding hood told in a new way. and the way that it is told, the spin this movie has on the classic tale, is quite clever.

the police arrive to analyze the crime and figure out exactly what happened. at this point, we begin our flashbacks. like rashomon, the classic akira kurosawa japanese film, each character tells a very different story. and each story sheds new light onto the situation. in rashomon, there were different versions of the same story and so we didn’t know which one to believe. here, it’s a little different. each character tells of the event leading up to the house situation. and each story ends in the same place. because of that, many people say that this movie begins at the ending, but i don’t know if i would completely agree with that. i mean, this is not memento here.

instead, i would say that it opens with a big crime and then we get all different stories about the events that led up to that crime. it’s certainly smarter than the average kids’ movie, on basic premise alone. a frog detective is called in to interview each suspect and try to get to the bottom of it. and as if that weren’t enough, there really is a criminal somewhere in the woods, stealing everyone’s recipes, and the characters in grandma’s house seem to somehow be connected to those crimes. is one of them the real thief?

with such a smart initial idea, it’s almost hard to believe that the movie falls off it’s own tracks. it almost seems like this movie with these ideas would be hard to screw up. but this movie does. that’s because each individual flashback story is very shallow and meaningless and dumb. the stories seem to have nothing to do with anything. we get a story about the woodcutter wanting to be an actor and auditioning for movies. we get a story about the grandmother being an extreme sports athlete and dominating on the ski mountains. stories like this are entirely pointless. they add nothing to the mystery and seem to be in there just to provide mindless action for kids.

even the wolf story, which starts out promising, having him be a reporter, ends up with him riding a wire like it’s a trolley. and little red riding hood’s story ends with her hang gliding by using her hood. the action is long and it goes on and on and adds nothing at all to the story. with every new action scene, we feel our attention draining. we want to hear more about this mystery, but the action makes our interest grow dimmer and dimmer.

the movie really is a mystery and that’s what is so unique about it. there really is a criminal who gets uncovered by the end. and there are clues sprinkled throughout the film that do indicate that there might be something suspicious about this person. the movie has fun with all of this. it has the frog detective pacing around the house, talking to his suspects, saying things like, “you were all brought here by chance tonight.” It’s right out of a murder mansion mystery like clue or identity or agatha christie’s murder on the orient express or her book, and then there were none.

And when we do learn who the criminal is, the movie is smart enough to go back to various scenes and moments throughout the film and show us what the clues were. it’s a sixth sense / usual suspects move and it works here very nicely. the movie is a creative mystery that treats its basic plot like a film for adults.

But unfortunately it gets scared by this and so it rushes in a boat load of terrible action for the kids. this way it’s not too smart for kids and there’s something they can get out of it. that might work from a studio perspective, but it also slowly starts to ruin the movie. i can understand throwing some action in from time to time, but it should have somehow been relevant to the basic plot. the action should have involved the mystery. instead, it was all just a series of side stories meant to fill time and end with the character inside the house.

I applaud this movie for what it was trying to do and am extremely upset that it didn’t go all the way. what would have been so bad about having a smart kid’s movie? And so what if the movie happened to be more for adults than for kids. the adults would walk away loving it. the idea to use red riding hood and other fairy tales was, of course, inspired by shrek, but so what. with all of the classic fairy tales being made into live action movies these days (it all started with tim burton’s alice and wonderland, and now has reached the point of three competing snow white movies all being made at the same time), i’m glad the animation market is getting in on it too. Hoodwinked had a wonderful and original idea going for it, but it got sidetracked by it’s need for action and lost sight of the story’s focus.