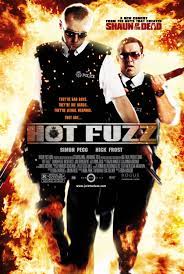 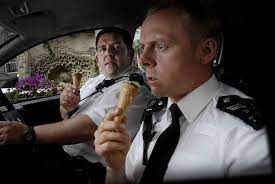 Edgar Wright is a smart director. He’s the guy who made Shaun of the Dead, Scott Pilgrim Vs The World, and Baby Driver. Like James Mangold, Wright is a guy who likes to bounce around from one genre to another and to really push himself into taking on creative and out there projects. Scott Pilgrim, for example, has to be one of the most experimental films of the past few decades. Hot Fuzz, by contrast, isn’t extremely experimental, but it is absolutely Wright’s best film to date.

With this movie, he was taking on the buddy police movie genre, and rightfully calling out other movies in the genre that he was referencing, such as Point Break and Bad Boys 2. Only unlike those movies which were either complete action, or action comedy, Hot Fuzz does a whole lot more. It hits those two genres, of course, and really is a comedy more than anything else, but the movie also happens to be a hell of a mystery, and is really handled with artistic precision.

The story is about a police officer named Nicholas Angel (played by Simon Pegg,) who is a straight-laced detective that is so good at his job, he makes everyone else around him look bad. And that idea is played for comedy in a fantastic opening where three different high ranking officers are called in to tell Angel that he is being relocated to a small farmland town, away from all the big city noise. The three officers are all played by prominent actors, (Martin Freeman,  Steve Coogan, and Bill Nighy,) and one is funnier than the next. By the end, the three of them are calling it a promotion and sending Angel on his way.

Not long after this, Angel is arriving in that small town with his Japanese Peace Lily plant, which apparently he cares more about than any person. He arrives at the hotel where he will be living and the mood and moment are handled just right with that eerily creepy atmosphere of the old woman working at the front desk saying to him, “but you’ve always been here.”It’s one of those lines from classic ghost stories, where a character has been dead all along or that sort of thing, and it helps transition us from the pure cop comedy to the spookiness of this mysterious town.

Angel goes to a pub on his first night, where he just drinks cranberry juices. He’s there to observe, on the night before he starts working, and what he observes is a whole ton of underage kids at the pub drinking. He shuts all of that down, kicks them out, books a bunch of them, and brings in Danny Butterman (Nick Frost,) whom Angel arrests for attempted drunk driving. The next morning, when Angel officially reports for work, he learns that Butterman is a police officer. He’s also the son of the Police Chief, Inspector Butterman (Jim Broadbent,) and he’s Angel’s new partner.

The two of them start off the day by visiting a school and taking pictures for the local paper. By the end of the day, they are attending a play of Romeo and Juliet, representing the police presence at the show. Only right after the play ends, there is the murder of two of its two lead actors. This isn’t discovered until the next day, and appears to be a traffic collision, only Angel knows better. He suspects it was murder from the beginning, noticing that there are no skid marks beneath the tires.

Seeing Angel argue that deaths are murder and not accidents, again and agsin throughout this film is one of the funniest running jokes in the entire movie. There are a whole bunch of other murders that follow, and each one is staged to look like an accident, and easily deceives the other police officers working on the force. Not only do they get fooled by the accident staging, but they argue with Angel whenever he brings up murder, claiming that’s he’s the psycho who is obsessed with his theories and can’t see that these are really just accidents. The two “Andy’s” who argue against him, in particular, are hilarious. It’s a staple of buddy cop movies that there are two other partners who hate are protagonists and give them a hard time, and these two guys take that trademark to the next level.

The murders keep piling up, and one is more gruesome then the next. When a cement rooftop structure falls off the top of a building and lands directly on the head of a character, splattering the head completely, it’s not only horrific but it’s also a callback to the great Agatha Christie murder mystery “And Then There Were None.” But it’s the death of the local plant store owner that finally get Angel to start putting the pieces together. With that one he begins to notice there’s no way that one person could have out run him so well, and gotten so far ahead of him at every turn, and from there it’s off to the races, heading directly towards the climax.

And what a climax it is. Without giving anything away in terms of who dunnit or how the mystery angle ends up, let’s just say this one turns into a ball out action monstrosity. It’s intentionally comedic at the same time as it is exciting, riffing on all of the action movie cliches it told us about and laughed at earlier. We’re talking about moments like jumping through the air while firing two guns at the same time, or firing a gun up into the air while screaming because you can’t shoot the person in the back. Or even the famous Michael Bay shot that circles around the heads of two detectives as they lift their heads up to acknowledge that they are in the middle of a mess…a shot that was originated with Bad Boys.

Thismovie not only references those films (Bad Boys 2 and Point Break,) and discusses them, but also has the characters watching them.. But aside from being a fan of the genre and making a movie that celebrates it, Hot Fuzz stands out as it’s own great movie, apart from those others. It’s the rare movie that hits about four genres at once, tells a very dark and horrific murder story and does it with an ultra-comedic tone. The balance is pretty remarkable, with Edgar Wright having plenty of scenes that have nothing to do with the murder mystery and just exist for comedic purposes. Like when the characters find and confiscate a ton of weapons being held by an old man, but first have to make out what the man is actually saying. And the work Wright does here with sounds, music, and rapid fire montages rivals the best quick cutting montage masters at their best (Darren Aronofsky with Requiem for a Dream and Guy Ritchie with Snatch.) This is truly Wrights masterpiece, his most funny movie, and also his most devious mystery. It’s an absolute gem.