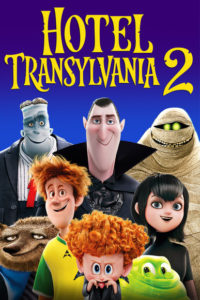 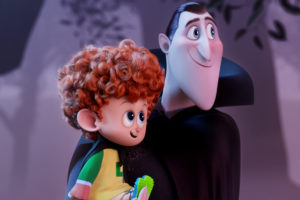 Not quite as good as the first one, simply because the freshness and originality of the concept are gone, but this sequel is fine and filled with energy and jokes, some way more funny than others.

This movie us fun. It’s not as entertaining as the first movie, mainly because like all sequels, you’re competing against an idea that you’ve seen before and is no longer fresh. But the movie does find a storyline that can both build on what we already have while also keeping the same theme as the first film. That theme is acceptance, and once again it’s Dracula, (Adam Sandler,) who is not willing to accept something at the start of the film. He wants his grandson, Dennis, to be a vampire, and it’s starting to look like Dennis might turn out to be a human. This drives the course of the film, and one major act in the middle, where Jonathan and Mavis, (the parents,) go away for a few days and Dracula is left to watch Dennis. He takes full advantage of that time and brings Dennis to a camp to try to convert him into being a vampire. A lot of fun ensues. The camp visit and seeing how PC and safe it has become, is one of the best gags in this movie. This film is by no means great, but it is enjoyable and light hearted, and filled with energy.

Hotel Transylvania 2 is a fun movie, mainly because of the level of energy it brings to the table. The first movie gave us this rich idea about a hotel for monsters and what happens when a human walks through the door. By the end of that movie, Dracula (Adam Sandler,) had come to terms with his daughter, Mavis, falling in love with a human, (Jonathan, voiced by Andy Samberg,) and had learned acceptance. So where does this one have to go? Well, in this movie, Mavis and Jonathan have a baby, and the big issue is whether or not he will a human or a vampire.

Dracula is still our protagonist, (after all, Sandler is still the biggest name in the movie,) and so the issue about what the baby is become especially important to him. Mavis tries to explain to him that she’s okay with this baby, Dennis, being whatever he turns out to be, but Dracula feels that he needs the baby to be a vampire. If this isn’t metaphorical for accepting a child who turns out to be gay, than I don’t know what is. In the first movie, the acceptance theme could have been about any human trait, (race, religion,) but here, it seems pretty clear, in terms of accepting a child for who he turns out to be, that this metaphor is especially direct and obvious.

So, yes, the theme is acceptance one again, which is a bit of a letdown since it more or less means going over the same territory, but this movie finds ways to make it feel somewhat new. First, it doesn’t even get into this issue for a while. At the start of the film we are at the wedding of Mavis and Jonathan. It’a a perfect place to begin, because it makes this film feel like an absolute continuation of the last movie. It also reintroduces us to all the characters at once, at a big gathering. And it brings Jonathan’s parents to Transylvania, as voiced by Nick Offerman and Meghan Mullaly, (a real-life husband and wife team that are a lot of fun together.)

After the wedding, we jump ahead to one year later and Mavis takes her dad out for a flight, (they both turn into bata and fly up into the clouds.) That’a when she tells him the news, that she is pregnant. Moving at a rapid fire pace, we get to the scene of her giving birth and her father has disguised himself as the nurse. This is creepy, when you think about it, but I think the idea here is that the father just can’t wait to find out if the baby will turn out to be a vampire or not. Of course, we does have to wait. A lot. Even when Dennis is nearly five years old, we still don’t know. He’s possible a late “fanger,” as one character says later on in the film.

Most of the movie takes place at this time, when Dennis is turning five. Apparently that’a the magic age where if you’re not a vampire by that time, then you’re just not going to end up being a vampire. So it’s an important birthday or deadline date to have on the horizon. Especially for Dracula. He’s constantly checking the mouth of Dennis to look for any fangs,. And when a birthday party for some of the wolf pups goes horribly wrong, Dracula’s true feelings are exposed. Dennis loses one of his baby teeth, and Dracula celebrates, thinking it means he has a fang coming in. Mavis gets upset with him, saying it’s not a fang and that Dennis actually did just lose a tooth that he wasn’t supposed to. Then she drops another bombshell on him.

Mavis tells her father that Jonathan and her are thinking about moving to California. That’a where Jonathan’s parents live, and it’a where he grew up. It will mean raising Dennis among humans and giving him a “normal,” life. This inspires Dracula to have an idea. He noticed during a text from earlier between Jonathan and Mavis, that Jonathan was starting to feel like the two of them never got any alone time anymore (funny because they live in a hotel with a ton of characters who could watch the baby for them anytime, including their father.) But still, Jonathan was starting to feel like he needed some attention from his wife too, and so Dracula tells them his idea.

He offers that the two of them can go visit California together, while he stays in Transylvania and watches Dennis. Mavis and Jonathan take Dracula up on this and go off on their trip. For Mavis, it is the first time really going out into the human world, (she tried once, in the first movie, and her father rigged the town full of zombies dressed like humans to scare her off.) This time, they go to places like a Seven-Eleven-esque convenience store, and a half pipe area where kids are riding bikes up and down ramps. Of course, Jonathan and Mavis have to try too, giving us the laughable (Jonathan,) and the exciting, (Mavis.)

But before leaving, Dracula has a little heart to heart with Jonathan. He asks Jonathan how he feels about Transylvania. Jonathan loves it there and wants to stay. With that in mind, Dracula tells him not to let Mavis have too good of a time out in California. And Jonathan takes those words pretty seriously, constantly trying to remind Mavis that things aren’t so great out there. Meanwhile, Dracula’s real mission for getting the parents away, is to sneak Dennis off to find the old camp that taught Dracula everything he needed to know about being a vampire. This camp was the place that helped him find his powers, and he’s hoping that it can do the same for Dennis.

Dracula takes all of his monster buddies along for the ride to the camp, and along the way, he tries to get each of them to show Dennis the real scares of what they can do. None of it works. He tries to get Wayne, the werewolf, to howl and kill a deer, and Wayne can’t do either one anymore. He’s too domesticated at this point, and would rather go chase after a frisbee. Than Dracula tries to get the Mummy to make a curse and create a giant sandstorm. Only the Mummy tries to do all the poses needed to create this curse, and ends up hurting his back. Even Frankenstein is met with people trying to take pictures with him, when he pops up to scare them. It seems like the camp is Dracula’s only hope, and so they leave the woods and go searching for it.

The camp turns out to be a fun situation. Dana Carvey plays the head counselor who runs the place, and these days everything has become PC and more low key. That’a a running joke at the camp. How safe and sensitive we have become as a society. So, for example, instead of having to catch a mouse by hunting, each kid is just given a mouse, go instill confidence. When Dracula sees the new area that vampires jump from, to try flying, and how it is very low to the ground, and also filled with safety wires and nets, the Camp Manager tells him there were too many lawsuits with the previous jump off point. These kids of jokes are fun. So is the running gag about the invisible man, and the girlfriend he claims to have, who nobody can see.  There’s even a surprise character who shows up for the final act and really drives the movie into a new direction. All of this is great. The jokes are only occasionally funny, and the story is just okay, but the way that it keeps unfolding and getting better as the movie goes on, works. This is definitely an enjoyable and fun film.