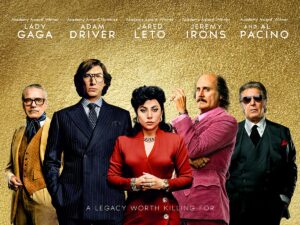 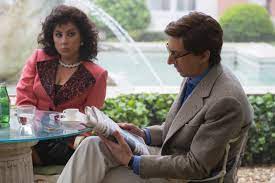 A fine movie about scandal and betrayal that is entertaining enough, but also kind of forgettable afterwards.

This movie is certainly enjoyable and interesting for the accents and Italian lifestyle alone, but when it comes to being memorable, this one doesn’t have a lot to offer. Unfortunately, it’s the kind fo story we’ve seen before, again and again. And sure, this time it’s based on a true story, but that really doesn’t make much of a difference when they’re not presenting us with anything new. There are two movies in one here, the firs being the story of the relationship between Mauricio Gucci and his wife, Patricia (Adam Driver and Lady Gaga.) The second story is about the Gucci company, and all of the betrayal involved. Both stories are good, but together they don’t quite gel. This is especially noticeable in the second half, which loses the momentum that the first half built up, by trying to rush things and not giving us enough.

House of Gucci is an okay movie. Truth be told, it’s pretty good while you’re watching it. The actors and performances are all solid. The story is interesting. But the problem is, we’ve seen it all before. Movies about legal classes contracts  that cut people out, and manipulation, are a dime a dozen. We’ve seen it so often, in fact, that the more famous examples have become lingo in other movies, like in Glass Onion: A Knives Out Mystery where a character says, “he Social Networked her,” referring to the well-known Facebook movie, of course, and the way one character cut another out of a company through legal battles and lies.

So then what is the appeal of this movie compared to others? How is this one different in ways that make it stand out? If you’re the studio, then you’re saying that this movie is based on a true story, and that this one involves murder at the end. But let’s be real, the murder is only a very tiny part of this movie, at the very end.  But also, this movie takes place in Italy, tells the story of Italian family high status relationships, and has all of the actors using heavy Italian accents. That turns out to be cooler than one might expect. Especially when it comes to Adam Driver.

He plays Mauricio Gucci, a man born into this wealthy, but controlling family.  Driver makes the accent sound great, and really shows that he is a talented actor, once again (Marriage Story was the first time we got a peak at his talented this guy is.) In House of Gucci, Mauricio is tricked into thinking a series of events are all coincidences, and he is basically manipulated into falling for Patricia Reggiani (Lady Gaga.)

She’s the real star of the movie, and the protagonist who we are there alongside, right from the start. At the beginning of the movie, we see her working for her fathers company in a trailer at a construction site, as all the men who work there faun over her. We see her get asked out on dates, and get the point that she could have her pick of any of these construction guys she wants. Only she wants something more. Higher status. And we see her go to a lavish dance party, meet Mauricio, and become fascinated when she learns who he actually is.

They hit it off at the party, but not enough for it to make any difference or impact on Mauricio. Only Patricia sees opportunity, and she’s not about to let this one night if fun on the dance floor go without results. She isn’t having that. Patricia knows what she wants, and what she wants is him. Which means she begins stalking and spying on him, to find the perfect place and moment to have another “accidental,” meet cute. That place happens to be a bookstore. And even there, with her standing right beside him pretending to read a book, Patricia still needs to do everything possible to get his attention. When they start talking and walk outside together, she still needs to do everything possible to get him to take her phone number. In this case, that means writing her number on his Vespa windshield, even before he asks for it.

Once they start dating, however, the game is on. At this point the movie isn’t so much about their relationship as it is about the relationships with other members of the Gucci family. Specifically Mauricio’s father, Rodolfo played by Jeremy Irons. He wants nothing to do with Patricia and begs his son to leave her, sending that she is a gold digger and beneath their family name. Only Mauricio refuses and sacrifices his family name as a result, going to work construction for Patricia’s father.

Soon other family members get involved, including Rodolfo’s brother, Aldo (Al Pacino,) and his own son, Pablo, who is known to be an idiot. Pablo has terrible fashion sense and ideas. But Aldo works to bring Mauricio and his father back together, and gives Mauricio a job working for him in New York. Soon the company is back in Mauricio’s hands with him controlling Rodolfo’s half and Aldo controlling the other half. That’s when the long con to get Aldo out begins.

Now, this could have and should have been the most interesting part of the story. How do you wrestle half of a company away from someone, and do it legally? Only instead of explaining it carefully to the audience, and taking its time, this part is sort of rushed over. At the end of the day, we know that Mauricio has Aldo arrested for some illegal activity, but how Mauricio found out about that, and how he pulled the strings to make the arrest happen is not clear. And it is certainly not told in a way that is memorable.

With Aldo in prison, Pablo is in charge of his fathers half of the company, and it becomes very easy for Mauricio to trick him into signing it over. All they have to do is promise Aldo his own line of clothing, (the devious plan is to allow the line to be made, but never actually sold,) throw in a few other appealing elements, and give him a pen to sign. And just like that, Aldo is released from prison to learn all about what his idiot son has done while he was away. The confrontation at a board room table here, where Mauricio walks out from behind a closed door to reveal that he was the one pulling the strings, is pretty intense.

And then there is the relationship between Mauricio and Patricia that falls apart. Mauricio starts spending time away from her, staying at a ski lounge where he connects with another woman. And naturally Patricia gets angry. This becomes a problem for Mauricio, and soon he cuts Patricia off all together, wanting a divorce. That leads to Patricia putting the murder plan into effect. In a sense there are two movies in one here. There’s the movie of the company and the betrayals there. And then there’s the movie about the relationship between these two people, and how it ends in organized and sanctioned murder. This combination should have made for a great film. So why did it not? The best answer has got to be that not enough time was spent on either individual story. We needed more details about how the company betrayal was working, and also more about what drove Patricia to murder. For example,  what did she think she would get if Mauricio was dead? Did she think she would get the company? The first half exceeds the second half because it takes its time. There’s less story there, and yet they do more with it. By the second half, it’s almost like a rush to the finish line. The movie is relatively long, and maybe that’s because they took their time with the first half, but the second half definitely needed more.