How To Lose Friends And Alienate People ** 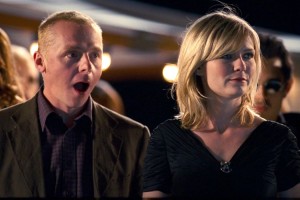 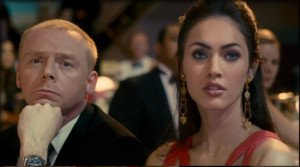 A cross between the devil wears prada and mr. bean that has nothing new to offer as it falls into all of the usually recycled cinema cliches.

How To Lose Friends And Alienate People is a movie based on the short-lived journalist experience of sydney young working for a new york magazine. it’s based on a true story and apparently this sydney young was quite the character in real life, very un-P.C., very ridiculous, and very offensive. that explains why someone thought this movie could have potential and how this thing got made. young wrote a book about his experience, with the same title that this movie shares, and that explains why the movie has this title. because in the movie, he doesn’t really lose friends and alienate people. it would probably have been a lot funnier if he did.

simon pegg plays young here, and if there’s any reason at all to see this movie, it’s because pegg is the star and because usually his movies are good. up until this film that is. his previous movies were shawn of the dead, hot fuzz, and run fatboy run. all three of them were great. only here, with how to lose friends, pegg drops the ball. not that it’s really his fault, other than in poor decision making when chooising a script, but here pegg shows that when dealing with poorly written material, he has nothing to bring to the table at all.

How To Lose Friends And Alienate People is a movie that is not all that different from every other movie like it. it’s about a misfit who goes to work for a big agency. in this case the agency is a magazine, and he’s a writer. the sydney young character uses voice over at the start of the film to explain a little bit about who he is and what he’s doing. he talks about how he always wanted to make it into the spotlight where he could mingle with celebrities. he talks about how he’s at an awards show right now and the hot, young nominated actress (megan fox) says she’s going to sleep with him, and he tells us that things didn’t always used to be this way for him.

we flash backwards to how young started out as a journalist in england, trying to crash parties. for some stupid reason he brings a pig around with him, wherever he goes (he claims the pig is babe, hoping that will get him into parties), and so of course when he does manage to sneak in somewhere, the pig goes wild and causes problems of destruction. and somehow this gets young a job working for new york’s sharps magazine. how this idiotic disaster got him a job is beyond me, other than that it was certainly a stunt that got him noticed. i suppose it goes with the saying, any publicity is good publicity.

there’s a little bit of discussion, once young goes to work for sharps, about why the boss of the magazine, clayton harding, (played by jeff bridges) would hire him to begin with. young’s only guess is that clayton sees a version of himself in young. he sees a guy who takes after the way clayton used to be when he was young’s age. so what? Can young do the job he’s being asked to do, or not? if he’s incompetent, which he appears to be here, then who cares if he makes clayton laugh or something, he’s just not right for the job. that doesn’t seem to matter here.

we get a lot of attempts at jokes involving the relationship between young and his old woman landlord who thinks he’s a moron. nothing new there. the same goes for everything that takes place around the office. he accidentally kills a dog, opens the door to a fire exit that sets off the alarms in the building, and starts drunkenly singing about england on the fourth of july.

if the movie really wanted to go all out and make this a selfish character who just cared about superficial things, than it might have been a much funnier film. when a superstar hottie (fox, again), says that cocaine makes her really horny, young goes running around a party looking for cocaine. and he finds it, but then sees his friend alison, (the nice girl, as opposed to fox, played here by kirsten dunst), needing a ride home, and so he gives her one. he takes care of her because she’s drunk and sick. i’m sure the real young would have ignored her and continued with giving fox the cocaine.

there are certainly some small laughs in the film, every now and again, but they are both small and quick, and they are also easily forgettable. when he interviews a man, young asks the guy if he’s gay. this gets him into trouble. so does a stripper stunt where he hires a stripper to come see another employee at the office and make it look like that employee is being unprofessional. does young not realize that it’s going to come out that he was the one who hired the stripper and not the guy who clearly got surprised by having a stripper in his office? this movie isn’t about plot, it’s about trying to hit us with quick jokes. and so some of the jokes are slightly funny every now and again, but there’s nothing smart here at all. nothing thought out.

of course we get the usual storyline where the girl young likes is dating somebody else (danny huston, the guy he hired the stripper for), and that somebody else happens to be a complete asshole. he’s the villain of the movie. and of course, young is out to prove to the girl that the guy she’s dating is a total jerk. it’s completely one-dimensional. kirsten dunst is clearly pitted up against megan fox here as the good, innocent girl to fox’s evil wild girl, but if the movie took a step back for a moment it would realize that dunst wasn’t all that great either. why, for example, is she knowingly carrying on an affair with a married man who has children and everything?

when pegg isn’t making stupid wisecracks he’s making idiotic noises and movements, and in that we he’s trying to do a sort of version of mr. bean. this happens when he coughs food onto someone in the elevator and then silently acknowledges what he’s done, as well as when he tries to get a dog to play fetch with him by making noises and talking in a strange voice. none of it works. pegg was so brilliant in his first three films that there is really no reason to change any of that. certainly his first two movies were knock-outs and i’m sure that had to do with director edgar wright as much as anyone else. but also there was the fact that pegg was playing the smarter guy in a buddy movie situation to nick frost’s idiot. only when frost dropped out of the equation in run fatboy run, and pegg was left by himself, did he take on the idiot role. he managed to pull it off there because that movie had heart. unfortunately, How To Lose Friends And Alienate People doesn’t. it’s got nothing new to offer as the main character really just spends the movie doing impressions of other characters in other movies. how to lose friends isn’t painful to watch or anything (although you can see the ending coming from a mile away), but it really has nothing worthwhile to add and is a pretty pointless and unfunny film.