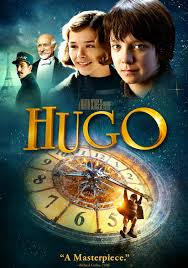 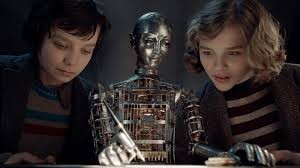 A fascinating art movie that acts like a painting come to life as it tells the story of an orphan boy hiding and running around a busy parisian train station, searching for answers.

Hugo is director martin scorcese’s love letter to the first movies ever made. it’s as much about the silent film era and connecting with the past as it is about the orphan boy trying to keep his existence a secret from those who occupy the train station each day. scorcese has a blast making this movie look like a living painting, as if the computer animated film the polar express was suddenly made as a live action film. the story involving a mystery and unlocking some secrets is pretty good too. there aren’t a whole lot of riveting moments or anything, but this is definitely an enjoyable film.

Hugo is a movie that is great in 3d, but even in 2d, can be seen as  a fantastic spectacle. that’s because director martin scorcese went to great pain to tell this story right, using long tracking shots that move all around the train station and following characters through smoke and the busy hustle and bustle of the atmosphere. the setting is a key component of this film, and even before we know what the story is about, we get hooked just by the way scorcese presents the landscape to us.

the movie is about a boy who lives inside a set of clocks that hover over a train station in paris. on the inside, the building looks sort of like grand central station in new york, and is just as busy. there are clocks that hang down from the ceiling and then a giant clock that stands on the outside of the building, kind of like big ben in london, looking out over all of paris. the young boy, hugo, runs about from one clock to the next, making sure they are all working, believing that as long as he keeps them going, nobody will ever suspect anything and come looking for him.

hugo used to take care of the clocks with his father, (jude law), who would teach him all about building things and taking them apart. together they did fun little projects involving mechanics and the father even brought home a robot that he got from a museum. the robot was supposed to write, only it needed a key to work and neither hugo, nor his father, ever found the key.

one day hugo’s father died in a fire and his uncle, (ray winstone), tried to get him to leave and come work for him. only hugo didn’t like it much there and returned to manning the clocks in the train station, even if it meant living alone. when the movie begins, we see hugo spend his days either up in the clocks or else strolling around the station, trying to observe without being noticed.

there are three characters that hugo runs into a lot at the train station. the first is an old man who owns a toy shop and tinkers with the little gizmos that he is selling. this character, george melies, is not very friendly to hugo at first, and with good reason. hugo steals from him. george realizes pretty quickly that hugo has a special gift for fixing things, and he commisions the boy to come and work for him, although the job proposition never goes very far.

another character in the film is the station inspector played by sasha baron cohen. he’s supposed to be the villain in the film, hunting down little boys in the movie like a dog catcher and bringing them to the orphanage. to hugo, he is the enemy. he might be the enemy to a kid on his own, but this character is not evil, and is played more for laughs and goofiness than anything else. he’s got a romantic subplot of his own, in which he falls for a woman he meets at the train station. that kind of approach, where even the villain just needs to find the right woman to soften his heart reminds me of movies like chocolat that are kind of corny, but still kind of charming. luckily this movie spends a minimal amount of time on the romance plot, and gives us just as many interaction between the inspector and his boss, who has just learned that his wife is pregnant, and possibly not from him. this is all very comedic.

finally, there is hugo’s friend and partner in seeking out adventure, isabelle, (played by chloe moretz from kick ass.) She has a key around her neck that was given to her by her grandfather (george), and just might be the key that fits hugo’s robot. but getting the robot to work is only the start of the adventure. it’s a catalyst that helps launch the characters into a mission that takes them even further. the first half is a lengthy introduction to everyone and everything at the train station. that includes flashbacks to hugo’s father and the robot. the second half begins when the robot starts writing and suddenly the first secret is revealed.

another catalyst comes when the two kids are in george’s home, going through his drawers, and find a stack of papers they weren’t supposed to see. suddenly a whole new door is opened to them that they could have never expected. they go to libraries and question other characters, looking for answers to who the grandfather was and what this might have to do with hugo’s father.

some of these questions are answered and some aren’t. the movie becomes a tribute to the silent film error, just like the artist, only this one is more about the history of it all, and how those films were made, whereas that one was about the actors. i love that the second half of the film becomes something totally unexpected and that couldn’t possibly be predicted in the first half. this movie is extremely unique in the way it goes down it’s own creative path.

while i was hoping for more, in terms of the connection to and answers about hugo’s father, the movie sidestepped any arbitrary connection by trying to stick to a more realistic premise. things aren’t always neat and wrapped up with a perfect bow, and this movie recognizes that. but it is a sort of mystery where certain answers do come out as the story unfolds and the characters get deeper and deeper into their quest. the movie is slow at times and doesn’t have to many spectacular scenes that stay with you, but it has a pretty cool overall plot and some very interesting revelations. it’s a good movie, but could have used at least one more burst of energy somewhere in the second half.