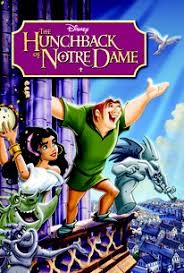 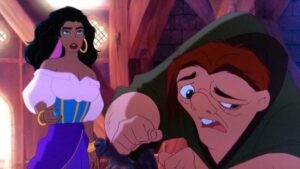 One of the more average Disney animated movies of the nineties, this one has some decent ideas, but not enough to really last for an entire film.

This one is very strange. It’s incredibly dark for a Disney movie and also somewhat religious. I suppose it’s hard not to contain anything about religion when making a movie about a Church, and the movie does a fine job of avoiding that sort of content as much as possible, but it’s still there, baked in, whether they are being super obvious about it or not. For example, the villain has whole songs where he prays to the Gods to help him avoid temptation, and specifically his lust for a much younger woman, who he is also trying to have killed. The hero of the movie, Quasimodo, is a deformed hunchback, and he falls in love with that same woman, Esmerelda, the gypsy. Only she’s in love with someone else. All of this is pretty awkward. Oh, and then there’s the scene where Quasimodo is tied up and tortured by a crowd during a festival. But despite these things, Disney does manage to get their usual staples in as much as they can including creature sidekicks (gargoyles in this one,) a fish out of water story (a knight who is new to town,) and some likable songs. It’s certainly not one of the better Disney movies, but this one is okay.

The Hunchback of Notre Dame is okay. It’s a decent Disney movie. There’s certainly plenty to like about it. But considering that this movie was made during the golden age of Disney animated films (the nineties,) and that its companions were movies like Aladdin and The Lion King, there’s no way this movie was even playing in the same league. For one thing, it’s really hard to make a movie about a deformed character. Especially a Disney movie which is supposed to be all about Princes and Knights and love. When this movie does approach those areas, things get very awkward, very quickly. And that’s just one of the many problems with the both the characters and story here.

There are four main characters in the movie. The hero is Quasimodo, the Hunchback. Then there’s the villain, Frollo, and the couple, Esmerelda and Phoebus. She’s a Gypsy and he’s a Knight, and you better believe that the only reason for having them both in here is so that Disney can have a good-looking, romantic couple in their movie. But Quasimodo is the protagonist. He’s an outcast who lives in the Church, up by the roof. Nobody ever sees him, and he never goes out, or leaves the Church. Frollo is the guy who is keeping Quasimodo locked up in the Church. He’s a sort of political figure who runs France. Frollo controls the knights, and is basically a King or ruler.

And Frollo hates Gypsies. At the start of the movie, he kills a Gypsy woman right outside the Church, while she is holding her deformed baby (a strange way to begin the movie.) To try to get back into good graces with God or the spirits watching over (again, very awkward for a Disney movie,) he decides to keep the baby in the Church and more or less raise him.And so Quasimodo grows up in the Church with gargoyles as his friends. The gargoyles come to life and have personalities, because every Disney movie needs an animal or creature sidekick or two or three for comedy, and because it would be too sad to think that Quasimodo lives his life all alone. So there are three gargoyles.., the fat one, the skinny one, and the old one. The fat one is voiced by Seinfeld’s Jason Alexander. And this is how Quasimodo spends his days, looking down at the people in the square, watching them, and dreaming of a better life.

Now to get to the other two characters, our romantic leads, there’s Esmerelda, the Gypsy, (voiced by Demme Moore,) and then there’s Phoebus, the Knight, (voiced by Kevin Kline.) These actors were both huge back in the nineties, but didn’t do a whole lot in the decades that followed. They represent the love interest couple of the movie, and what makes it especially weird is that Quasimodo is in love with Esmerelda too. At the start of the film, Esmerelda is out in the square doing dances and performances for money, and getting harassed by the knights and guards. Quasimodo, meanwhile, is up in the Church thinking about how The Festival of Fools is coming up, and considering going down to mix in with people for the first time. He figures he can pretend that his face is just a mask, since everybody else will be wearing masks as well. His plan backfires, but it does lead to him and Esmerelda meeting.

The gargoyles encourage Quasimodo to go down during the festival. Frollo opposes the idea and forbids it. And while Quasimodo is making his final decision, Frollo is welcoming in a new Knight who will be joining the rest of the soldiers under his command… Phoebus. Now, already things seem a little convenient here. First, we are to believe that this is the very only time Quasimodo has gone down to the party. He’s been living up there in the church his whole life, but has never done this before. And second, we are to believe that this new guy, Phoebus just happens to be arriving at this time, as the fish out of water in the story. Everything about these two plot points just feels a little too neat and orderly and cliched. It’s not the worst examples of convenience in movies, but it doesn’t exactly feel genuine either.

When Quasimodo does go down to the festival, he instantly gets awarded for having the best costume of the ugliest mask. So much for mixing in and staying out of the spotlight due to the fact that everyone else will be wearing masks too. Now Quasimodo gets brought up onto stage where they try to take his mask off. Only of course they can’t. At that point, the people in the crowd realize that he’s the hunchback from the Church, and they tie him up and start throwing all sorts of things at him. This is another example of content you don’t expect to find in a Disney movie. Esmerelda frees him, only she does so against the orders of Frollo, and so he declares that his knights arrest her.

Esmerelda seeks asylum in the Church, where the knights cannot touch her. That’s where she and Phoebus meet (what a name for a knight. Thankfully Disney got better with its names over the years,  giving characters like the hero in Tangled the name Flynn Ryder.) Phoebus comes to find her, following the orders of Frollo, and he and Esmerelda start out fighting, but end up hitting it off. He’s the one who tells Esmerelda claim asylum by staying in the Church. Only now she’s stuck here, with Frollo promising that if she ever leaves, his knights will arrest her.

At this point, as strange as it’s been, we do have a story. It works, despite being incredibly dark. But now the movie kind of runs out of ideas. So it just has Quasimodo help Esmerelda escape, has Frollo go looking for her with his knights, and then has Quasimodo go to find her and bring her back to the Church. The reason she really comes back is because Phoebus gets injured and Esmerelda brings him to the Church for Quasimodo to care for him. But it definitely feels like a lot of going back and forth. And just about everything that happens, you can see coming from a mile away. This includes Frollo telling Quasimodo he has discovered the secret Gypsy hideout and will attack at dawn. Then watching as Quasimodo leaves the Church to go to the secret hideout to warn the gypsies, and get followed by Frollo in order to learn the real location.

As if the movie wasn’t bizarre enough, there’s another angle that seems pointless and is not explained at all. It’s Frollo and his obsession with Esmerelda. If it was just that he hated her because he hated gypsies, that would be fine. But here, he is actually in love with her. Now, first off, he’s an old man. And she is far younger than him. So it’s very creepy. And secondly, where does this come from and why is he trying to kill her if he’s really in love with her. None of it makes sense, and we learn of these strange feelings when he sings a song to the fire he has going in his fireplace, asking for help in rejecting her temptations.

The story here is ultimately kind of weak, and both the visuals and the music are just okay. With the visuals, sometimes you can tell the animators are going all out, like when Quasimodo slides down fountains of water on the sides of the Church or swings down on a rope, right over the crowd, to rescue Esmerelda. But other times, it just looks pretty average. And the songs also are hit and miss. There are two good ones (“Out There,” and “Heaven’s Light / Hell Fire,”) but the rest are pretty forgettable. I suppose that’s a pretty solid metaphor for this movie. It’s okay, and there are certainly some good ideas from time to time (The Paris backdrop and the use of the Church are fantastic, for example,) but ultimately the story is too dark and strange to really work, the same way that the better Disney films do.