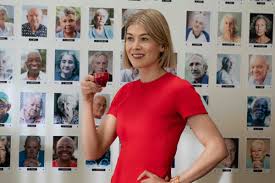 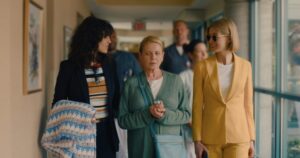 A pretty good movie for three quarters of the way through, the concept here is great and the direction it goes in is also pretty good until suddenly it becomes something else, defies believability in a few too many ways, and goes off the rails.

Here’s a movie with a really fun abs creative concept that just kind of loses its way at the end. And by the end, what I really mean is the final third of the film or so. But for most of the way through, this one was very clever and entertaining. It’s one of those movies where the protagonist is actually a villain who you love to hate. Marla takes advantage of the elderly, has a business in which she “legally” gets them commuted and sells of their things,  and then single-handedly reals in all the profits. When she crosses paths with the wrong target, however, things go in directions she never saw coming. All of that works. And if only the movie held onto those ideas, this would have been great the whole way through, but by changing things up in the final third, the movie loses its way.

I Care A Lot is a pretty great movie for most of the way through. It’s a movie with a fantastic premise and then some really nice execution. The only problem is the direction that the movie goes in, during its final act. Unfortunately, a final act is so important. It’s what the viewers are left with at the end of the day. It’s the last thoughts they have about the movie. And in the natural order of things, it’s supposed to be the most exciting, or the best parts of the movie. And considering that in this case it is actually the worst part of the movie, (and there’s nothing that comes afterwards to really put the movie back on track,) it’s a bit of a problem. Let’s just say, the poor ending single handedly takes this movie from a great film to a pretty good film.

The movie is about Marla, a woman who serves as the legal guardian to elderly people who don’t have anyone else in their lives to speak up for them. Only in many cases these people actually do have children who are willing to do just that. And Marla finds loop holes in the court system so that the children can’t actually be the guardians. Meanwhile, Marla checks the elderly people into an assisted living facility and then sells off all of their assets, pocketing all of the money she gets as a result. She continues to pay for the assisted living facility, but other than that, the rest of the money goes directly into her account. Oh, and she makes it so that these elderly people she has checked in do not have access to a phone or to the outside world.

The movie opens with Marla’s voice over explaining how her system and job work.She talks about how all people in life are either the suckers or the ones doing the sucking. Either the ones doing all the work, or the ones benefiting from those that do. She talks about how opportunities are there to be taken advantage of, and if you’re not the one taking advantage, then someone else is probably taking advantage of you. And so Marla has no problem doing things that are completely unethical, such as checking these people into facilities against their will, and even worse… lying to a judge about their physical condition and getting a doctor to go along with it.

After Marla tells us a little bit about her practice, sounding very much like she’s right out of Glengarry Glen Ross or Wall Street or Boiler Room, we actually see one such example in practice. Not from beginning to end. That will come later with the specific victim who ends up being the main plot of the movie. But we see it with a man whose mother has been checked into the facility and who Marla has made it impossible for the mother to see. At one point, the man gets frustrated with all the red tape and restrictions keeping him from seeing his mom, and he goes nuts on the workers at the facility, destroying the waiting room area, and basically ensuring that his behavior will mean he can never see his mother again. This is exactly what Marla uses in court to prove to the judge that this man is unstable and should not be allowed to see his mom.

All of this is kind of ridiculous… for example, if the guy just kept his cool, there would have been nothing they could have done to prevent him from ever seeing his mom. And the judge agreeing with Marla just because this guy went a little crazy in one instance seems a little harsh. But even still, we go with it. Marla makes a pretty solid case, and it’s not like the guy is asking to see his mom in that case before the judge. He’s asking to be his mother’s legal guardian, and Marla is using the attack to prove a reason why this man is unfit for the job. All of this is still the opening. It establishes pretty solidly how Marla runs her business, including the wall she has in her office with the faces of all of these elderly people on it. It’s almost like a game, the way she has everyone and everything setup there, kind of like a suspect wall that you see in crime shows, where there are strings or lines drawn between different characters to show the connection.

The real story starts with a new victim who is handed over to Marla by a doctor. The doctor is on Marla’s payroll, which means this woman calls Marla up when she has a name of a patient who the doctor is declaring unfit. The doctor falsifies the report to claim things like early signs of dementia. And then Marla swoops in. Some of the criteria that the doctor and Marla both look for are that the person is wealthy, and that they do not have any children (a situation that we saw get Marla into hot water with that man in the opening sequence.) The doctor passes the name off to Marla and Marla shows up at the woman, Jennifer (Ellen Burstyn’s) house, along with some local police men who wait outside. Just their presence on the scene is enough for Marla to explain and convince Jennifer that she needs to come with them for now, and the rest can be settled and figured out later.

So now Jennifer is checked in, and the ball is rolling, and the story has actually begun. Everything seems fine for Marla until a man comes looking for Jennifer and sees Marla and her girlfriend, Fran, painting the house. When the man asks about Jennifer, Fran tells him she no longer lives there. The man finds this suspicious and leaves. We then see him report to his boss, Roman Lunyov (Peter Dinklage,) about what happened. Lunyov finds out where Jennifer is, and finds out that Marla is the one who holds all of the cards in this situation. He sends his attorney over to Marla to try and buy her off. Only she wants way more money than he’s offering. That’s when Roman decides to just send his goons into the facility to do it the hard way and just drag Jennifer out, using violence if they need to.

All of this is great. The guy who tells Roman about Jennifer, Alexi, is great. So is the lawyer. These are menacing people and you believe that they are up to something and not to be messed with. Even when Alexi goes in with his two backup guys, and tasers the manager of the facility, and nearly gets Jennifer out, we are on board. Sure, the plan doesn’t work the way it should, and ends up being a failure, but we still believe these guys are capable of some real serious violence, and its the threat of them looming over our heads that makes this so exciting. It’s the anticipation of what they are going to do to Marla.

And they do eventually catch up to Marla. First they have the doctor killed. Great move. Suddenly the stakes are raised and the threat of these guys, and what they are capable of seems very real. And then they get Marla and bring her out to a deserted area where Roman sits down with her face to face. Only he doesn’t shoot her here, like he probably should. Instead, he has his goons put Marla in a car, drive the car into a lake, and then leave the scene. Really? Nobody is going to stay around to make sure she doesn’t somehow get out of it. And of course she does get out, which is completely unbelievable. This is the point where the movie goes off the rails. The next act is about Marla running the show, enacting revenge on Roman. She literally takes out his bodyguards as if she is some sort of mercenary. Give me a break.

That final act is so poorly made compared to everything that came before it. At one point, they even make Marla look a little bit like the good guy…  like we should care about and be rooting for her. Understandably, if the movie just had Roman kill her, that would be the end of things and wouldn’t leave many more places for the movie to go. But maybe instead of Marla being the one who miraculously escapes and then comes after him, it could have been her girlfriend, Fran, seeking revenge on Roman for what he did. At one point the goons come after Fran and attack her, and for some reason just like with Marla in the lake, they don’t kill her. They just leave her there, still alive, and of course she ends up being just fine. These are the kinds of areas where the movie seems to refuse to commit. And the final decision between Marla and Roman is completely ridiculous. Luckily this movie does have an absolute final button to end things that puts is back in the right direction, but by that point the damage is already done. And there’s not enough time left for the movie to really redeem itself. This was a pretty great film until the final act, but boy did that final act really go off the rails.