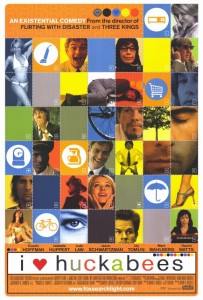 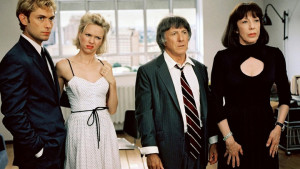 An awful movie, so out there and ridiculous that it makes some of the worst john waters movies look like masterpieces.

I Heart Huckabees is a terrible movie. either that, or i just didn’t get it at all, and i’ve seen it more than once now. well, not exactly. the first time i saw it, i hated what i was watching and i turned it off. i probably didn’t get more than fifteen minutes into it or so. years went by. people told me that there was something i was missing. so i watched it again, and you know what…those people are wrong. this movie is so dumb and so terrible that i just can’t believe people like it.

alright, let’s get into why exactly this movie is so bad. it starts out with a guy named albert (jason schwartzman) going to an existential detective agency to find out what some coincidences have to do with anything. now, that’s an alright start, but the problem is the coincidences don’t have anything to do with each other. in fact, they’re not even really coincidences. it’s a simple matter of that albert has seen the same guy three times in three different places. he’s run into this same guy three times. so what? especially considering that the guy works in his parents’ apartment, and seeing him there counts as one of the times.

so that lousy, “mystery” is what the plot of the movie is based on, and as it turns out, there really is no mystery at all. albert goes to this agency, and the head detective, vivian (lily tomlin), tells him she’s gonna be watching him everywhere, studying him, and learning from him. and she does. when he sits down to eat cereal in the morning, she’s looking at him from outside the window taking notes. now that idea is somewhat funny, but it would have been even funnier and also more believable, if it wasn’t tomlin there, but someone who works for her. some weird little guy, like the little indian guy who was in all of wes anderson’s first few movies playing strange background characters.

at the office of the agency, albert meets vivian’s partner, played by dustin hoffman. he puts albert in a bag and zips it up and asks him what he sees. and albert sees all kinds of faces floating at him. if somehow the hallucinations were cool, then maybe this idea could have been worthwhile. like maybe if he imagines himself in some strange world, like in contact. but here it’s just faces flying at him.

speaking of weird things with faces, there is a running gimmic in this movie where the parts of different people’s faces float off of them as little squares and then fly across to other people and go over the part on these people’s faces. maybe there’s some meaning here, like it’s supposed to represent something, (like that we are all the same or something like that), but it just seems pretty out there and annoying.

the title of this movie refers to a company where albert works. that company is called huckabees. it’s a big chain store like walmart or k mart or target. the tagline is huckabees, the everything store. and albert writes for them. he writes a poem about a large boulder and gives the boulder a funeral where he recites his poem.

huckabees also has two other big name actors playing characters who work there. jude law plays the big businessman of the store, brad. he’s the corporate guy and also the antagonist of the film. and his girlfriend, dawn, (naomi watts), is the model that the store uses in all it’s advertisements. the detectives approach brad and tell him that they investigating albert and want brad to come in and sit for interviews with them. and he does.

the next thing you know, brad is subjecting his girlfriend to these interviews and she is reacting to them as if she just woke up and learned she was always living in the matrix. suddenly she stops dressing hot and acting classy. she puts a bonnet on her head that makes her look like a pilgrim and wears it everywhere she goes. she’s had her jerry maguire realization moment, and she’s going to stand up to the corruption and injustices of the corporate world from this point on.

there’s also another character, tommy, played by mark wahlberg, here. wahlberg is an actor who seems to love working with this director. david o russell, the director of the movie, is known to be a jerk. in fact, with this movie he had his biggest behind the scenes meltdown of all, screaming and cursing at lily tomlin. and after making three kings, george clooney said russell is so unprofessional that he will never work with that director again. yet wahlberg seems to like him. first three kings, then this movie, and after that the fighter. russell is definitely a good director, two of those three movies are fantastic. but the third one, I Heart Huckabees, is bad on so many levels.

wahlberg plays a fireman who doesn’t ride the truck here. he hates cars and thinks anything who drives a car is the devil. and his character becomes good friends with albert. this movie has so many weird ideas and insane moments that it’s often painful to watch. for example, albert and tommy spend more than one scene just slamming each other in the face with a giant rubber ball. they do it over and over again. in another scene, albert and a woman get it on and instead of making love, they cover each other in mud, trying to get as dirty as possible. this is a movie that i desperately wanted to turn off. the only thing that stopped me was that i had turned it off the last time i tried to watch it, and this time was curious to see if it got any better. it didn’t. i believe this was david o. russel’s experimental film, and he needed to get it out of his system. good thing, because the movie is absolute garbage and we need russell’s head clear to direct other movies like the fighter. I Heart Huckabees is an absolute mess.