I Know What You Did Last Summer *** 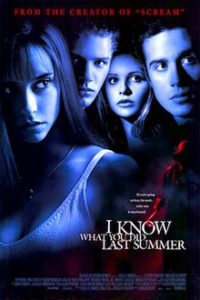 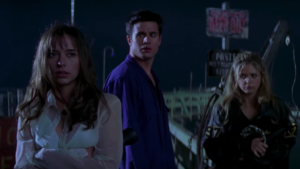 Surprisingly, a pretty decent teenage horror movie that takes the reigns from Scream and continues the genre.

I Know What You Did Last Summer is a pretty decent horror film. It plays like a B movie about teens who run over a guy in the street, throw his body in the lake, and then find themselves being stalked, threatened, and murdered by someone the following summer. The characters are intentionally kind of dumb, (they’re teenagers, after all,) and the story isn’t the smartest either, but it makes for some entertaining fun. Especially with the deaths and the twists that come at the end.

The late nineties was a time where teenage horror films re-emerged as a genre that seemed fresh and reborn. It all started with the movie Scream, made in 1996 about self-aware kids who knew every horror movie cliche and yet still fell for them, and found themselves being stabbed to death by a costumed killer. After Scream was I Know What You Did Last Summer, and after that was Urban Legend. But then they started making sequels (Scream 2, I Still Know,) and expanding into sci-fi (The Faculty,) crime thriller (Teaching Mrs. Tingle,) and even tapping into former franchises to get in on the action, (Halloween H2O.) Pretty soon the market was over saturated, and the movies being pumped out were lousy riffs on the originals. Scream may be pretty good, but it’s sequel is awful. The same goes for I Know What You Did Last Summer. And just like that, the genre disappeared back into oblivion for a while.

But for that brief period of time, in 1996 and 1997, the movies were pretty good. Scream, of course, was the masterpiece, and the one that kick-started it all. But I Know What You Did Last Summer was the runner up. Both movies were written by Kevin Williamson, who also wrote the teenage WB show Dawson’s Creek, (in I Know What You Did, which proceeds that show, the characters refer to “Dawson’s Beach” as their local beach, throughout the film.) And While I Know isn’t anything close to as good as Scream, it also isn’t half bad.

Here’s the thing… while Scream tried to get super creative with the characters and their knowledge of horror movies, and found the right level of humor to mix in, I Know What in many ways goes the opposite route. It wants to be more conventional. That means a story of four teenagers who do a hit and run, only instead of just running, decide to throw the body in the water. The person, who they assume is dead, comes to life to grab the necklace off one character’s (Helen, played by Sarah Michelle Gellar,) before disappearing underwater. When her boyfriend, Barry (Ryan Phillips,) goes down into the water after him, and finds the motionless body, the body comes to life again. And so Barry punches him, grabs the necklace, and just leaves the body there. There’s no reason to think this guy is dead. But our characters do, and a year later they start getting notes in the mail.

The notes are just the beginning. Soon they find themselves and their friends being attacked. And they, themselves, are playing detective, trying to find out who is sending them the notes.  None of it is all specially intelligent, and yet it’s all kind of fun. The other two teens who were in the car that night are Julie, (Jennifer Love Hewitt,) and Ray, (Freddie Prinze Jr.) These are the two more likeable characters. When they hit the person on the road, Julie is the only one if the four who wants to do the right thing and call the cops. But she goes along with the plan of the others anyway. And Ray is the poor fisherman’s son from the wrong side of the tracks. Of the four of them, he’s the only one that is not well off, and has to work in a boat. This leads the others to suspect him, thinking he is jealous of their lives.

Only Ray isn’t the first suspect on their list. That honor goes to Max, another blue collar character, who guys like Barry look down on. Max has a thing for Julie and Barry finds himself often threatening Max for even talking to her, (remember, Barry is with Helen, not Julie. He’s most likely threatening Max just because he wants to and enjoys being a bully, not because he’s trying to defend Ray or Julie’s honor, or anything like that.) Barry is the most unlikeable of the four teens. He’s clearly spoiled and a bully and mean to everyone who comes across his way, including both girls in their group. The characters are definitely the weak point of this movie, and nobody proves that more than the one dimensional Barry. The irony is that Ryan Phillipe may not be that different from this character in real life, and so he actually plays the simple character pretty well.

That character Max, (played by Johnny Galecki,) who has the crush on Julie, is driving by the cliffs where the group has just run over someone, the night when it happens. They hide the situation from him, pretending that they are only pulled over because Barry had too much to drink and is vomiting on the side of the road, but even still, his appearance that night is enough for the characters to suspect him first, once they start getting notes. And when Barry threatens Max with a fish hook, and then Max picks up the hook and waves it after Barry, you know this is the start of how the hook becomes the killer’s weapon. And just moments later, in the very same location where Barry threatened Max, (the  ice room where fresh fish are brought in to the back of a restaurant,) the killer shows up and guts Max. It’s pretty gruesome, including a fish hook to Max’s neck, and gets the killing scenes started off with a pretty graphic example.

But there’s a little more to the story of the fish hook and how it got to be the weapon of choice here, for the killer. The night on the beach, before the four teens hit the guy while driving, they were sitting around a fire telling scary stories, and it turned into a discussion of urban legends. Each kid knew a different version of the same story, and what that really meant was each kid was combining parts from another story together with the fish-hook-hand man story. So we got a story about the girl in a parked car out in the woods, waiting for her boyfriend, hearing scratching sounds on the roof of the car, and not realizing that it’s the sound of her boyfriend’s feet as he’s hanging from a tree. Of course we got to see all this for real in the movie Urban Legend. But the scene itself, of the four teens telling the story, demonstrates Kevin Williamson writing. In Scream they all knew the horror movie cliches and laughed about them. Here, they all know the fish hook story, as well as other urban legends, and laugh about them. It’s not exactly good writing, but it’s still kind of fun.

So the legend comes true as Max is the first victim killed, but the movie doesn’t just leave it up to coincidence that the killer would be re-enacting the same story the teens were discussing earlier. Instead, the dialogue has them still discussing the story, while moving the body, (joking around to see if he has a fish hook hand.) And so the killer, who is still alive, heard all of this and is able to copy if later on. Especially when his first victim, Max, as a fish hook stuck in a block of ice right next to where he’s working. After Max, the next attack is on Barry. It’s outside his gym, after leaving one night, and the killer hunts Barry down with his car. But he doesn’t kill him. He’s saving that for later on.

At this point, the two girls start playing detective, driving out to the Styx to see the sister of the boy they killed. As played by Anne Heche, this woman tells the girls of a friend who came to visit after her brother’s death, named Billy Blue. And now the girls start suspecting that this mystery character is the killer who is stalking them. The cool thing here is that all of this comes into play later on. The Billy Blue story, the reason why Ray doesn’t want to go with the girls to see the victim’s sister, even the tattoo on the arm of the guy they threw into the water. The clues do add up, but only at the end.

So there’s a nice twist ending here that pulls the wool over our eyes, in terms of who the victim they hit with the car was. You don’t expect a movie like this to have such a clever twist, and to have clues that really do fit so nicely together, but it does. The problem is, they only start coming out at the end. Up until that point, it’s about the murders and chases, and those really aren’t that great. Between the mannequin plastic covering over the hiding killer, (scary, yes, but not very practical for running after someone,) or the scene where Helen kicks out the back window of a police car, (I gotta think those windows are made so that they can’t be kicked out from the inside,) there’s a lot that feels dopey here. It’s B movie quality deaths and characters and dialogue, but the mystery and twist are what give this thing a new breath of life at the end. Not a great film, but still kinda fun.