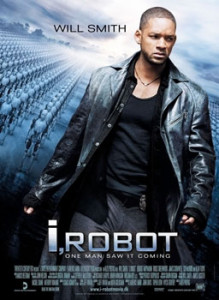 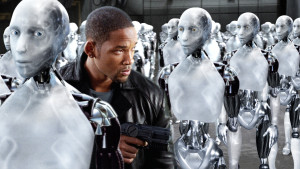 One liner review: it’s a robots attacking the world movie meets a who dunnit murder mystery as will smith leads this futuristic action movie to a fun place.

I Robot is an enjoyable sci-fi thriller that acts like a film noir with robots and computerized action. It’s not as smart as it pretends to be, but it still tells a mystery that keeps you curious until the end and wanting to see more. The movie takes place in a future where robots are everywhere you look and do things for people to help out. Our hero, spooner (Will Smith) is a wisecracking police detective who has a dislike of robots and the way people so easily trust them. The movie opens with him chasing one who is trying to do A good deed for someone, and then being ridiculed for making the mistake by his peers.

Spooner gets a phone call regarding the death of the scientist who built all of these robots and made everything possible. He goes to the office building where the scientist (James Cromwell) was killed and starts his investigation. There, he meets two new characters, the man who was Cromwell’s partner (Bruce Greenwood), and the woman who greenwood sends to escort Spooner around (Bridget Moynahan).

Greenwood and everyone else around insists that Cromwell killed himself. The door to the room he jumped from was locked from the inside. But Spooner has suspicions. Especially when a robot in the room comes to life, pulls a gun on him, and then runs away.

Suddenly it seems to us like spooner might actually be right. the robot is brought in for questioning, but that goes nowhere. Spooner, however, has a few run ins himself. When he goes to cromwell’s house to investigate, a giant robot machine tears the place down with him inside. And when he tries to listen to the recorded phone conversations between Cromwell and greenwood, a whole slew of robots suddenly show up and attack him.

That, for me, is the best scene in the movie. It takes place in a tunnel with smith putting his car on autopilot as he sits back and closes his eyes, not expecting the attack that’’s coming his way. And it’s the way the scene is setup that’s so brilliant, not the actual attack and action. Smith is practically asleep in his car and slowly two giant robot carrying vehicles drive up, one in front of him and one behind him. And each one of them starts turning, one at a time, to form a wall or shield blocking him off on both sides. he doesn’t notice any of this, sitting back in his seat comfortable, as the garage-like doors stat to open up on one of the vehicles, and robots suddenly start jumping out.

While I liked that scene and some of the other elements to this movie, there are also plenty of silly parts and inconsistencies. One somewhat ridiculous plot point is that the murder takes place on the eve where this company is putting a new robot into every home. It’s the biggest moment of the history of the company and the man who ran the company is killed and nobody says maybe we should call this giant scale distribution off, at least until we get some answers? Another silly plot point has both smith and moynahan popping in at each others houses as if they’re old friends. It just seemed incredibly unrealistic.

The movie goes on to feature large scale attacks and explain the solution to it’s mystery, although I’m still not completely sure it all adds up. It does give us a villain, but it’s not the kind of villain we were hoping for. Still, at least it gives us an answer and explanation.

The Comedy element is one of the biggest factors that hurts this movie. It’s as if just because the movie has will smith in it, the filmmakers assume he has to be funny. Not true. Maybe they haven’t seen The Pursuit of happyness or Ali. When it’s not working the comedic angle, the movie is pretty interesting, but every attempt at comedy really falls flat.

The mystery isn’t great, but it does have that paranoia feel to it and one man against a conspiracy. And it does keep you interested and offer some pretty cool scenes. There’s a little too much slow motion in the action, but that’s a minor complaint about just a few moments of the film. Otherwise, the action is computerized fun. And there’s even some cool back story about smith’s previous experience with a robot. I like the way that’s all revealed when we get a look at his arm in the middle of a fight scene.

Alex proyas, the guy who made the crow back in the 90s, directed this movie. After the crow, he made dark city, which was also bleak, stylized, and cool. I, Robot is the weakest of the three, but it’s still pretty decent. Will Smith is a good leading man and the mystery angle is what makes this story work.