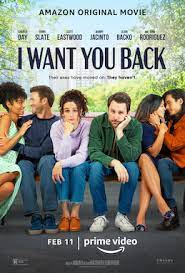 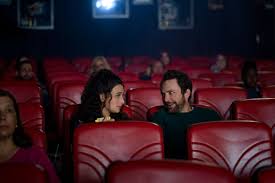 A very funny and creative romantic comedy, this one has a premise that is fairly simple, but the hilarious stars have great chemistry and take this one to the next level.

Here is a movie with a very simple premise, that finds every golden opportunity possible to branch off in ways that are both creative and funny. Credit for that should go in large part to the stars, Charlie Day and Jenny Slate, who are both on top of their game here, knocking everything out of the park. The story has two characters who have b en dumped team up to help the other win back his / her ex. It’s almost like a take on Strangers on a Train (or Throw Mamma From a Train,) and it absolutely works.

What happens when you put two super talented TV comedians together in a romantic comedy? The answer is, it all depends on the story. If the story is good enough, then you just might have the recipe for something special. Such is the case for I Want You Back, the new movie starring a Charlie Day and Jenny Slate. The movie is off the rails funny, and a lot of that has to do with the leads, but one has to also realize that this could have easily gone the other way. Just last year, we were given same two successful stars formula with The Lovebirds starring Kumail Nanjiani and Isa Rae. In that case they were both stand up comings and immensely talented on their own. Only that movie fell flat on its face, due to a routine and over-used plot. But with I Want You Back, we actually do get a smart, worthwhile, and very enjoyable movie, which is definitely something to celebrate.

the premise here has two people, Emma (Jenny Slate,) and Peter (Charlie Day,) both in relationships, and both get dumped. And of course the ways that both of these happen are very different, and funny each in their own way. Peter gets dumps at a child’s birthday party, for example, and has to try and hold it together afterwards (which he fails at miserably.) Both Emma and Peter work in the same building, on different floors. They meet in the stairwell, where they are each eating lunch, trying to get some alone time from the rest of the world. And they come up with the idea to help each other out.

What happens next is very clever. They decide since their former partners are now both in new relationships, they can each try to help break the other relationship up. It’s almost like a take on Strangers on a Train, the classic Hitchcock film where two strangers meet and agree to each do the others murder, because there will be no connection to  the one actually doing the murder, and no body knows that they ever even met each other. So the plan is that Emmas’s ex, Noah, has never met Peter before, so Peter can jump in, meet Noah, and point him in the direction of wanting Emma back. And vice versa.

When you think about it, this premise is so simple, it’s actually kind of brilliant. It’s almost like a spin on My Best Friend’s Wedding, where a character goes to a wedding with the sole intention of breaking the engaged couple up. Only here it’s two couples, two different storylines, and a whole bunch of hijinks. And the best part is that this movie tries to keep the two situations as different as possible (whereas other movies might have focussed on the connections and parallels and hoped audiences would think it was cute how much these two situations had in common.) I Want You Back is way smarter than that. It knows that people are here for the humor, and not the cute factor. And so it goes for the jugular with trying to make us laugh.

This includes threesomes, high school plays, night clubs, and even house parties and drugs. But let’s beck track a little here. The differences start when Emma suggests she helps Peter get his ex Anne back by stealing the new guy Anne is seeing (Logan,) away from Anne. When Peter offers to do the same thing for Emma, Emma laughs. “Have you seen Noah?” She asks.   In other words, Noah is incredibly handsome and fit, and there’s no way Peter is pulling that off. So it’s onto another idea. Peter will befriend Noah and then try to convince Noah that he misses and wants to get back together with Emma.

This starts with Peter going in to join Noah’s gym and then hiring Noah as his personal trainer. They end up going on runs, hanging out, and becoming friends. The club and house party scene is the climax of their relationship, at least as far as humor goes. This is where Peter tries Molly with Pete Davidson, who isn’t too thrilled with Peter for stealing the girl who he considers to be the love of his life. It’s also where Peter accepts a challenge and jumps from a second story balcony into a hot tub. And the punchline of the whole thing comes when we realize who the girls are, that they are hanging out with.

Petet’s story is pretty good, but it’s Emma’s story they blows this one out of the water. For one thing,  Jenny Slate gets the best lines. When she tells Peter she can just tell Noah that she is pregnant with his baby, Peter says “how does that help me?” Emma’s response… “you can tell Anne she’s pregnant with your baby,” Another great moment comes when she’s singing or “Suddenly Seymour,” to herself, and sings, “Suddenly Seymour’s…going inside me, – that can’t be right.” And the scene where she does the play, as a stand-in for the girl who plays the part, but is absent that day, is absolutely fantastic. Best scene in the movie. Her comments under her breath while all this is going on are terrific, and the little boy who plays Seymour and interacts with her is also great fun.

But Emma’s story has even more then that going on. She befriends a little boy who is working as a stage hand on the play because he got detention. And she helps this boy out with his problems. And then there’s the great threesome scene where neither Emma nor Anne wants to take their clothes off and every gesture becomes hilariously awkward. Most movies don’t dare to go this far (granted the movie featured no nudity, and only went as far as the characters stripping down to underwear and dancing,) but just the idea of it is pretty creative. And it is funny as hell.

The problems really start coming towards the end. And they’re not even they extreme, just not quite on the same level as everything else. First, there’s a great setup where Peter ends up in a box at the bottom of the bed while some interesting things are going on, up on the bed. The setup is there, but we should have definitely gotten to see more of Peter’s reactions to what was happening. Next, the way that Peter leaves Emma alone in a restaurant towards the end is ridiculous and unforgivable, considering that she just helped him out, and how she must be feeling in this moment. And finally, the last scene is a little too simple and on the nose. It wraps things up just a little too neatly.

But these things aren’t huge, or deal breakers in any way. The movie still achieves comedic levels and storytelling creativity that most movies wouldn’t even get close to. For example, the movie never really cuts corners to make all the pieces fit together… the two exes don’t start seeing each other, just so we have less characters to keep track of, but instead each get involved in another relationship. And that leads to many more funny situations that we would not have been able to get otherwise. The two potential break up plans don’t both end up the same way, and that’s important because realistically not everything would work out. And then there are the many meetings and planning sessions between Peter and Emma, where these two discuss things like the limited amount of realistic sexual positions, or jokes about the movie Con Air and Cruel Intentions. Charlie Day and Jenny Slate have fantastic chemistry, and it all makes for a very enjoyable movie.