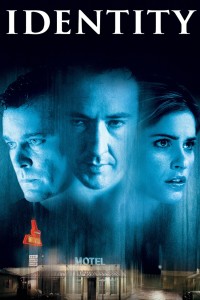 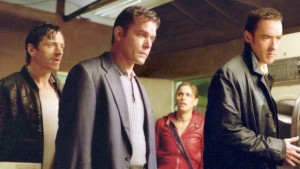 A very creative mystery that cashes in on the formula of strangers meeting at motel on a rainy night as a murderer starts killing them off one by one.

Identity is a mystery thriller that takes on the classic formulas of the very best of this genre and adds its own twists and ideas. That classic formula is the plot line where a bunch of strangers meet for the first time at a hotel or a dinner party in a mansion, or a weekend getaway, and one by one, they all start Getting killed. In this movie, the location is a run down motel. It’s got the night time rain element that was so prominent in the 1980s movie, Clue, another film that mastered the elements of this unique genre.

To me, the stranger in a hotel getting murdered plot line has always been one of the best. For one thing, the hotel idea makes the viewer almost feel like one of the guests. Especially since these characters are all strangers and don’t know anything more about each other than we, the audience, know about them. And then there’s the night time rain, where lightning and thunder add to the frightening atmosphere. And finally, but most importantly, there’s the idea that the killer is one of them. These movies are all smart enough to establish that the characters who have banded together are the only people there, which means you get the idea, as they all huddle around in a single room talking about what’s happening, that the killer is not only in the room with them, but is actually one of these people.

James mangold’s Identity uses all of that. He’s clearly a guy who loves and appreciates the genre and the simplicity of it all. I suppose it really goes back to agatha christie’s story, “and then there were none,” also titled “ten little indians.” In that book (which was made into a great black and white movie), the strangers were invited to a party at a mansion (Just like in Clue). and in And Then There Were None, when each one was killed, another figure was found removed from a circular statue of ten indians. Well, here, in Identity, when each person is killed, a key with a number on the key ring is found alongside the body. It’s a nice little homage to the classic tale.

The movie stars john cusack as a limo driver who hits a woman with his car and is now trying to save her life. He brings her, her husband, (John C. Mcginley) and their little boy, to the motel. He also brings his passenger, an aging actress, along. The roads are flooded and there’s no way to go anywhere until the storm blows over, and so cusack as well as some other strangers he meets on the road, all end up there, at the motel.

Those strangers include a young couple, (Clea Duvall and her fiance) and call girl amanda peet. They are all met by hotel clerk john hawkes, who is just perfect for the role of the run down front desk employee. And not long after all of them arrive, does a cop show up with his prisoner. The cop is ray liotta, dragging a hand-cuffed jake busey along with him.

Things start getting interesting when the head of the actress (rebecca demornay) is found rolling around in a dryer machine. Next, it’s the boyfriend of the young couple, slashed to death in his room. And then the father, who gets run over by accident, or so it seems. And with every body, there’s another key, all numbered in order.

If this was all the movie had to offer, it would be interesting enough, but might seem like it was missing a tad bit more. Luckily there are two more major elements going on. One is a series of flashbacks that reveal who some of the people at the motel really are, and needless to say, they are not who we thought. This might not have anything to do with the murders, but it is still damn interesting and creative. Call it a red herring if you will, while not adding to the mystery, it certainly makes the story that much more compelling and scary.

And then there’s a storyline involving a spontaneous, middle of the night, final hour hearing about a mental patient who committed heinous murders, but just might be suffering from schizophrenia or multiple personality disorder. We don’t quite see the twist coming, even though in retrospect it seems like maybe we should have. But somehow, this movie manages to link the story of the trial together with the story of those other characters, and to do it seamlessly.

The final portion of the movie in which all is explained and then followed by a sort of epilogue is where things really come together. And it’s extremely creative. I don’t know if there’s ever been a movie quite like this, that uses this twist, and certainly not one that had all of those other genre elements going for it. And one thing pretty cool is that the movie gives us clues to all of it’s little hidden secrets throughout the entire way. Just watch the mannerisms and actions of some of the characters, after knowing the truth about them, and you can see that there were ways to tell or at least suspect them, around every corner.

James mangold is a fantastic director who tackled police corruption with his first big movie, cop land. That movie might have disguised itself under the banner of the police system, but it was a mystery and a film noir all the way. Identity is too. The two movies together are mangold’s two best, and it is clearly a genre in which he knows what he’s doing. there are things about Identity that i don’t like, such as a car explosion that is not explained at all, but for the most part it’s got some very smart ideas going for it and keeps the atmosphere and formula exactly the way they need to be to hit the nail on the head. This movie fits in very nicely with the classic genre, and tells a pretty remarkable and haunting story.