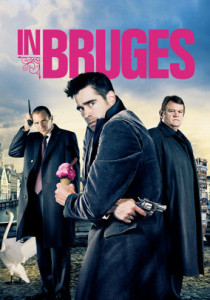 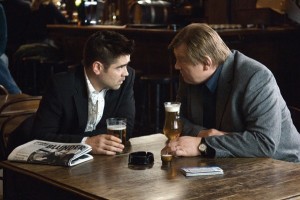 A very dark movie with a clever wit and enjoyable main characters, this film ends up being strange, but fun in all the right ways.

In Bruges is a very funny black comedy filled with creative rants and ideas. the premise is simple enough, as two hitmen hideout In Bruges, belgium waiting for directions from their boss about what to do next. the hitmen are ray (colin farell) and ken (brendan gleeson). these two couldn’t be more different, and the first half of the movie is really just about their personalities clashing and their frustration with not knowing what the plan is. colin farell has some hilarious rants in the movie, and his character is a guy who doesn’t seem to realize how politically incorrect the things he says are. the second half of the movie is where the real plot and action come out, and we are thrown for quite a few curve balls. this movie takes its time and really captures a certain mood and tone, setting it apart from most other hitmen movies. this one is pretty special.

In Bruges is a great movie. it’s a low key, sight seeing in belgium while really being a hitman on the lookout kind of movie. in many ways, this film has the feel of an independent production, and that’s a good thing. it’s not trying to bang you over the head with silly humor or explosions or really an overload of anything at all. instead, it’s about some interesting characters who are waiting around for answers.

the situation is that ray (colin farell) is a hitman along with his partner ken (brendan gleeson). ray was given an assignment to kill a priest, and he did. only he got a little carried away, wasn’t so careful about it, and a little boy got killed as well. ray and ken work for a man named harry (ralhp fiennes), and since that hit gone wrong, ray and ken have been out on the lam.

harry sent them to bruges, a small city in belgium, to await further instructions. he put them up in a hotel, and is apparently very fond of bruges and all of it’s peaceful sightseeing. so is ken. ray, on the other hand, equates being there to a form of hell. he is miserable and that becomes the humorous plot line of the first half. here, this guy is in one of the nicest places in the world, and he can’t stand it. all he wants to do is drink beer and pick up girls.

ray and ken are quite the pair. ray is always complaining and ken is always trying to shut him up. ken is the one who actually does love the sight seeing and everything all around them, and he encourages ray to come with him as often as possible. half the time, however, ray stays outside wherever ken is going, and deals with the local life, while ken goes off to explore the art and architecture. in one of the films many classic moments, a family of three overwight americans approaches ray about climbing up to the top of a giant bell tower and ray is very blunt with them about their weight. when they still don’t get what he’s saying, he calls them a bunch of elephants and then runs away.

ray has plenty of other scenes, just like this, where he is not holding back at all. when he sees a movie being shot with a midget as a member of the cast, he shouts out, “they’re filming midgets.” he then becomes obsessed with it, making visits to the set and asking all kinds of questions. he runs into the midget, named jimmy, a number of times, and even waves to him from far away. jimmy ignores ray, and that’s kind of right in tune with the spirit of the movie. ray is a nice, but depressed guy who doesn’t realize what is so wrong about the way he talks to people or the things that he does. at one point he even karate chops jimmy in the neck.

the conversations are a major part of what makes this movie so funny. ray is hilarious in his rantings and ways of looking at things. once he finds out that there are midgets in the movie, he suddenly becomes very interested in the idea that lots of midgets kill themselves. he mentions some of the famous ones that he remembers, to people, and asks what other people think about all this. he asks them, “why do you think that is?” ray even asks jimmy about all of this, and asks jimmy if he would ever try to kill himself. of course, once we know the whole story behind what ray is thinking, and what he is actually planning to do himself, it makes a little more sense. he is obsessed, not so much with midgets, but with death, and with the idea of one taking his own life. only that part he doesn’t go around telling everyone.

the first half of the movie is really all about the humor, and the second half is all about the action. it’s not a complete split like that, with there still being humor interspersed in the second half, but you gotta figure that the first half is where we really meet the characters. it’s the half where we get all of those funny and ridiculous conversations. jimmy, for example, goes on a rant after doing some drugs, about how there’s gonna be a war coming between all of the whites and all of the blacks, and how the white midgets will end up fighting the black midgets. it’s so dumb that it’s funny. especially watching ray’s reactions to this conversation, and the way he is incredibly fascinated about it, asking tons of questions about how this will all go down.

the movie starts to head into it’s second half when we hear from harry. first there’s a missed phonecall and a transcribed message that harry left with the woman who owns the boarding house. then harry does get in touch with ken one night, while ray is out on a date. harry makes ken get ray to leave the boarding house, and since ray isn’t actually there, and ken is just covering for him, ray has to go through a whole ridiculous production to pretend like he is getting ray to leave. if ray is one extreme, then harry is the other. and ken is the character who is caught in the middle.

harry has a special mission for ken, that ray can’t know about. that mission becomes the storyline of the second half of the film. the first half was about the characters and the second half is where the plot takes off. suddenly this movie becomes about action. we now get a villain and an understanding of where the story was going from the beginning, even though both us and the two main characters, didn’t know it yet. but harry knew it all along, from the moment he sent these two to bruges, and now it’s time to watch the fireworks fly.

In Bruges is a great movie. it is witty and smart, but at the same time, it balances the humor with action and excitement. harry is a wonderful villain, delivering one of those rapid-fire cockney accents the same way ben kingsley did in sexy beast. these guys make you feel like they are attacking you with their words. they aren’t the biggest or toughest guys in the world, but they sure do act like they are. the first half of the movie might not have as much to do with plot as the second half does, but there’s plenty on screen to make up for that. the humor is hiding around every corner, and on top of that there is also action in that first half (a fight in a restaurant, a mugging in an apartment), that just isnt related to the overall storyline of the film. In Bruges is very dark and bleak, and not for everyone, but as far as black comedies go, this one is definitely a winner.