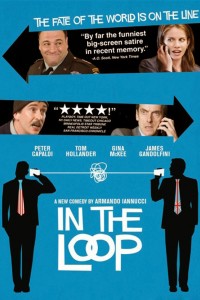 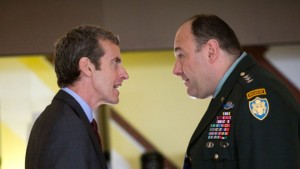 A movie with a funny initial premise that ends up going nowhere fast and feeling more like a tv show than a feature film.

In The Loop is a very wordy movie. In fact, the entire film is dialogue, with no interesting situations or events other than what people say and the reaction that those things get. it kind of reminds me of lincoln, in this way, only In The Loop at least has dialogue that is relevant to today’s time and that moves the story along without disrespecting the audience.

the movie is based on a very thin premise. there is a plot here, and it entails a british advisor of the prime minister saying something stupid on the radio and having to deal with the repurcussions.this man, simon, says that “war is unforseeable.” he was basically caught with his pants down when asked about war, and didn’t know what to say. simon was looking for something neatral to say about it, and this is what he came up with.

simon is a very nervous character. when asked this question, he didn’t really have an answer and was looking for something to say along the lines of, “i don’t really know, and please stop asking me that question.” what simon says is great, but the real laughs come when we meet his advisor, malcolm, who is the nastiest, most vulgar character imaginable. malcolm is like joe pesci in goodfellas. he is so violent with his words, that you are actually afraid of him, and yet he never does anything physical.

the movie is basically about these two men. simon is the fool and malcolm is the bastard. simon says stupid things and malcolm reams him out for it. the situation repeats itself when the boys fly to america and sit down in a comittee meeting. simon again speaks up, trying to coreect what he said the first time, and this time says that they might need to “climb the mountain of conflict.” this is his way of saying that they might need to go to war, after all.

once again, simon’s statement is met with criticism and anger from everyone. it gets so bad that simon is actually asked by some of his colleagues if he will resign. he just keeps coming across as a blundering idiot and making the rest of them look bad. and malcolm doesn’t just tell simon off, but literally speaks the same way to anyone who comes across his path. at one point, while standing outside the white house, he literally starts saying curses to himself until a tourist and his wife walk by and have to ask malcolm to cool it.

the problem is that this really is the plot of the movie. the whole plot of the movie. it seems much more suited to a television show than to a feature length amount of running time. as it turns out, this movie was indeed based on a british television series, called “the thick of it.” in fact, the movie is actually a direct spin off from the show, featuring many of the same characters.

i never saw “the thick of it,” but the show that this movie most reminds me of is VEEP, the hbo show about the vice president in america and her staff members, and all of the problems and stupid situations they get themselves into. as it happens, the guy who created the thick of it, and then made In The Loop, is also the guy who created veep. there should be no surprise about any of this. the problem, though, is that clearly this guy’s specialty is these kinds of scenarios that are much more suited for television than for the movies.

there are other things that happen in the movie In The Loop, but none of them are very significant. simon gets a new advisor, named toby, who is young and not used to this playing field. toby serves as the fish out of water character who brings us, the audience, into the whole thing. when things are being explained to him, they are also being explained to us, about the way that things work in this job.

when they get to america, toby goes and sleeps with the assistant of one the american representatives (this assistant is played by “my girl’s” anna chlumsky, who is also featured on the show veep. toby ends up missing the start of a meeting because of this and making simon look even worse than he already does.

there’s also a general lurking about, played by james gandolfini. i was really glad that gandolfini was in this movie, before seeing it. he was going to be one of the only recognizable faces in the film. as it happens, however, he doesn’t have a whole lot to do. he takes positions on things, but none of it is very memorable. perhaps his best scene is the one where he is confronted by malcolm and they both make threatening terms to each other, and neither one of them backs down. it’s funny to see malcolm, this tough talking character who has been verbally abusing everyone he came across, now try it on a real tough guy, and still go about it the same way. the movie leaves a lot to be desired, and other than those first two soundbytes which go horribly wrong for simon, there isn’t a whole lot else happening. unfortunately, those two moments come in the the first half of the film, leaving us very little to be excited for in the second half, other than a wall that needs to be repaired and steve coogan showing up as the guy who is upset about it.