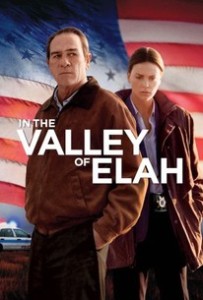 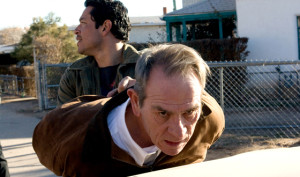 Despite it’s let down of an ending, this is a pretty good movie about a murder mystery, and the investigation by powerhouse grieving parent and former military investigator Tommy Lee Jones.

A pretty compelling murder mystery that is more focussed on being realistic about war, and what it does to men, then it is on being a true and audience-friendly case. There are no clues here, and the suspects aren’t made very clear. But what we do get is the story of an ex-miltitary investigator father, going out to the army base to look for his son. In the process he bangs a few heads trying to get answers and gets right in between the two parties running the investigation… the local police detectives and the military investigators. There’s a lot to like about this movie, including the way the story unfolds, but the film does have some time management issues, and throws us for one too many red herrings.

In the Valley of Elah is a strange mystery movie. It’s one of those movies where there is a murder to be solved and a whole lot of suspects and red herrings, but the real clues and answers don’t start coming hard and fast until the end. Now, one might say that the answer to a mystery always comes at the end, but this movie is different. Here, nothing of any concrete value towards closing up the mystery really comes until the end, and that’s s good thing, because it keeps you guessing and serves the quality of realism that this movie has over most others.

The situation is that an ex-army investigator named Hank Deerfield (Tommy Lee Jones,) gets a phone call that his son, Mike, who now serves in the army has gone AWOL. He’s missing and nobody has a clue where he went or why.  So Deerfirld goes to the army base to start running his own investigation.

Now, the movie does give us a list of suspects, although it doesn’t make it clear that that’s who these guys are. The suspects are Mike’s army mates and friends. There’s a lot of talk about how Mike might have been involved with drug dealers out in the desert, but we never learn about who these individuals are. That’s a mistake of the movie.

To be fair, however, this film does have quite a lot on its plate. After all, it starts out that we don’t even know there was a murder. Just that a character has gone missing. Soon the police find the body, burned and dismembered out in the desert, and it turns into an investigation. Now Deerfirld enlists the help of a local police detective, Emily Sanders (Charlize Theron.)

There’s just one problem. The body was found on army territory. The army has its own police and investigators. It is Deerfield, using his experience as an investigator, who is able to prove that the body was dragged, and actually was killed in a different area under the jurisdiction of the local detectives. That puts Sanders back on the case.

Now Hank and Sanders start working together. He gets a lot of one on one interviews with different soldiers Mike fought along side, disguising these interviews as sit down drinks and catching up conversations. With two of the soldiers. He offers them a drink. With another one, it’s a cigarette. All of this is just manipulation to get the guts to talk and not realize they are being interviewed.

Another character in the movie is Mike’s mother, played by Susan Sarandon. She’s a fantastic actress who is worked with Jones before (The Client,) only here, she’s kind of underused. Her character mostly sits at home, talking to Deerfield on the phone, receiving news from him, and crying. What is noteworthy, however, is the moment when she goes to see her sons body. Remember, this is just burnt and dismembered body parts we are talking about. You ask, what parent would want to see that, but Satsndon makes the case that she just wants to be with her son one last time. It’s pretty powerful and compelling.

There is a lot of red tape back and forth bantering between Sanders and the army investigator, Lt. Kirklander, (Jason Patrick.) He’s the kind of guy that does things completely by the book and in defense of the army as much as possible. At first he doesn’t even want to grant Sanders interviews with the soldiers, but instead to have his own people do the interviews and then to pass off the transcripts of the interviews to Sanders to read.

And thd red tape isn’t just in the army’s investigation. It’s a metaphor for most of what happens in this movie. Red tape and red hairings. This movie certainly spends a lot of time in areas that don’t further the investigation at all, from the story of a woman whose husband kills her dog, to a sit down that Deerfield has with an old friend at a restaurant, who end the lunch by saying he can’t help at all. What a waste of time.

Luckily things do start picking up, fitting together, and making sense more and more in the second half. There are still a few diversions, like another soldier who goes missing and has to be both found and chased down, but we do get some pretty powerful answers by the end. How everything works out is a little anti-climactic, but that’s the point. It is startling because of how anti-climactic and simple it all is. And the more you think about it, the more you realize just how haunting it all is. This isn’t the greatest mystery in the would, but it might be one of the more realistic ones, and it is certainly haunting.