Indiana Jones and the Last Crusade **** 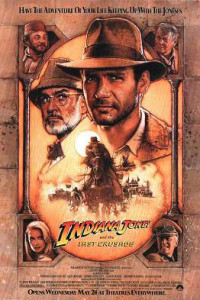 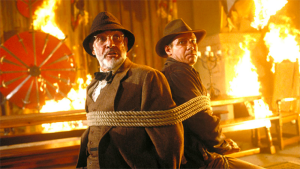 The best of the Indiana Jones movies, this one manages to take on the Nazis and the Holy Grail at the same time, and packs in loads of great action and adventure.

Indiana Jones and the Last Crusade is the greatest movie about the greatest clue solver and adventure seeker. Here’s the character that inspired so many others, from the National Treasure films to the Robert Langdon books / movies. And this is the movie where he is absolutely at his best, taking on all kinds of enemies and challenges. Indy goes on multiple quests in this movie, with one leading to another. He follows clues and comes across attackers on a number of occasions. Indy finds himself fighting while riding or up against a motorcycle, blimp, airplane, tank, and even a motorboat on the canals of Venice. The locations are superb and the movies kinetic pace really help it accomplish a lot. But the true testament to how great this movie is, would be the fact that it does so much and yet never feels overstuffed. Maybe it’s the humor that helps balance everything out, so that we never feel like we are just going from one action scene to the next. Whatever the formula is, this movie handles it just right in order to really make things work.

Indiana Jones and the Last Crusade is the best of the Indiana Jones movies. It’s the first and only film in the series that really gets to tackle everything this character is capable of. This movie goes into Indy’s childhood for what amounts to be a short-film-like prequel experience, and goes into his adulthood to see a somewhat older version of the character searching for his father.  There are multiple quests here, as Indy is searching for his father and his father was searching for the holy grail, so now Indy has to continue his father’s search in order to hopefully find his father.

What really works about this movie is that it goes for so much and ends up successfully being able to tackle it all. This is very different than the previous film in the series, Indiana Jones and the Temple of Doom. That movie was a very tight and enclosed picture about one particular cult-like situation at a temple inside of  a cave. The Last Crusade, on the other hand, opens it’s wings and explores as much as possible. We’ve got Indy as a kid, Indy as a professor, Indy as an explorer being given a mission, and Indy as a fighter taking on enemies in tanks, enemies in motorcycles, enemies on boats, and enemies in a cave (multiple caves if you consider what is under the museum as well as the final act of the film.) Indy takes on the Nazis, the Crusades, and the holy grail, all in one film. And the movie ties these antagonist forces together seamlessly.

We first meet Indy as a teenager, riding on horseback in Arches National Park,  part of a Boy Scout troop that is out exploring some abandoned caves. Indy sneaks away from the group and finds some grave robbers who have dug up a lost treasure from the time of the Crusades. Indy then creeps down to where the men are working and steals the item away, claiming it belongs in a museum, only to later have the authorities show up at his house and take it back. But not before we get a cool chase scene through the different cars of a circus train. There are some funny nods to snakes here, (Indiana’s biggest fear,) where we go from seeing him not concerned about a snake with his friend, to terrified of them after landing in a circus tank, covered by them.

After the Boy Scout cave sequence, we are with Indy on a ship, again trying to steal the same treasure, and then with him as a professor. The ship was him finding the treasure for a second time and escaping with it. Now, at the university, he turns it over to his friend, Marcus (Denholm Eliott,) who owns a museum. Indy sneaks out of his window to avoid some over-enthusiastic students, and winds up running into a car that’s waiting for him, to bring him to meet someone. This someone is a man named Donovan who has a proposal for Indy.  He has uncovered a stone statue of half a shield engraving from a tombstone of one of the knights who guarded the holy grail. Together, with the other missing half, this engraving will spell out the location of the holy grail. Donovan wants Indy to go and find the other half of the engraving, and the holy grail. Only Indiana Jones is not swayed. That’s when Donovan drops a bombshell. Their was a project leader who was out on this mission before Indy and who has disappeared. That project leader, who has gone missing, is Indy’s father.

And now things are underway. If that was a lengthy setup and introduction, then it was well worth it. We got to see Indy as a teenager (how he got the scar on his chin,  the fedora hat, and his fear of snakes,) we got to meet his father, (in the shadows, but enough to be curious about this man and want to know more,) and we got to meet Marcus by way of Indy completing his first quest and recovering the item that he came across when he was a kid. And now we are with Indy as he goes to Venice, Italy, the place where his father believed the other half of the shield inscription, and the tomb would be located. Indy’s father kept a grail diary where he wrote down every clue he came across and what it meant. He then mailed this diary to Indy, (which told him that his father was in trouble, as well as finding that days mail opened and the house ransacked, despite his father going missing a number of days prior.

Indy uses the diary and clues he comes across in Venice to uncover a secret passage and cave underneath a Church. This leads to the completion of the first mission, and discovery of the knight’s tomb. By moving at a quick pace, the movie is able to not only have Indy take on multiple missions, but to have each mission contain clues that Indy has to find, sort of like a scavenger hunt. There’s a reason that movies like the National Treasure films or the Robert Langdon movies (The Da Vinci Code, Angels and Demons,) get compared to Indiana Jones all the time. As far as treasure hunters, quest seekers, and clue solvers go, Indy is the best. He is the whole package rolled up into one. In Venice he first uncovers the secret tunnel, the deals with a tunnel fire, and finally ends up in a series of fights against an enemy while riding on motorboats.

That enemy is a secret society that has been sworn to protect the grail. One of the members of this group is able to tell Indy where he can find his father, and so Indy goes to this heavily guarded Nazi castle in Germany in order to find the man. And he does. Now Indy’s second mission is accomplished, (three if you count the golden cross at the start of the film, but that one was more like a preview of what sort of adventures were to come. At this point, Indy has found the knight’s tomb and found his father. But there are also some set backs. The Germans, who kidnapped Indy’s father, have taken his grail diary to Berlin. Indy and his father go there to get it back and in the process end up taking fighting off motorcyclists, escaping from a blimp ride, and getting into an airplane machine gun dogfight. All of this not to mention the giant fire they escape from while tied to a chair, or the desert tank fight that is to come.

With all of this going on, it wouldn’t be surprising to think that the movie is over-loaded and fully stuffed. It’s not. This is the kind of film where you want it to go as far as it can, so long as it doesn’t try to combine things that would make it silly. For example, whatever spiritual and majestical elements are involved in this story don’t present themselves until the final act, (just like in Raiders of the Lost Arc, the first movie in the series.) If Indy had found himself battling Nazis and also ancient knights at the same time, throughout the middle of this film, it would have felt out of place and pretty ridiculous. But this movie is so much smarter than that. It knows to make the enemy human as much as possible. And also, like Raiders, it knows to give us multiple enemies for Indy to face and to build each one of them up throughout the course of the film. There’s the leader who seeks the holy grail for himself, the Nazi commander, and the woman who has her feet in both camps.

The movie is loaded up with action, but it’s also filled with good humor. Sean Connery plays Indy’s father, and not counting his James Bond movies, this is one of the actor’s better roles. He finds the comedy elements right up his alley, and Connery and Ford play off each other nicely. On top of that, this film really does a great job of bringing back characters from the first movie, (both Marcus and Sala,) and giving us Indy’s biggest adventure yet. The multiple quests are great, but a little more explanation about why the tomb was in Venice and not Rome, might have been nice. Still, that’s a tiny bone to pick in a mostly fantastic film.

With everything this movie has going on, and all of the action and enemies, it’s pretty remarkable that it finds a path into the spiritual legend area for it’s conclusion. Just like in Raiders, this is the movie building up to an extreme ending (Indiana Jones and the Kingdom of the Crystal Skull attempted to do this too, only with much less success or discipline.) The final act of Indiana Jones and the Last Crusade really works not only because of its grand scale and mysticism, but because the movie allows this portion of the film to take its time (just like it did with the early scenes of the movie.) We see Indy go through multiple tests of traps and deadly challenges in order to uncover what he’s after, and we even get a new motivating factor in the way of what happens to his father, towards the end. This is the Indiana Jones movie that really has it all and pulls it off flawlessly.