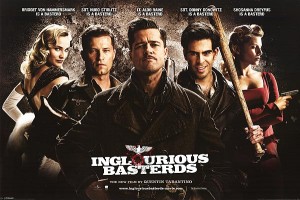 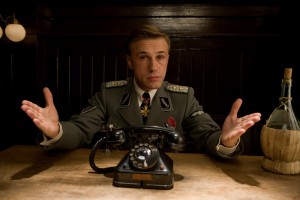 A fantastic war / men on a mission movie that once again demonstrates the brilliance of quentin tarantino both with storytelling and dialogue.

Inglourious basterds is a pretty great movie. it is a world war II movie, but more of a behind-the-scenes kind of story, about a group of jews who were out there, behind the battle lines, working on their own.these guys were a team of roughnecks, led by Aldo the Apache (Brad Pitt), with their one and only goal being to kill nazis and take nazi scalps. but the basterds were only one part of the story. quentin tarantino, the writer / director who was coming off his kill bill movies and then his grindhouse entry, decided to challenge himself even more this time. not only would it be a world war II movie, and a men on a mission movie, but it would also be a movie about three different characters who all had completely different story lines and paths.

the three characters were hans landa (the jew hunter), aldo raine (aldo the apache), and shosanna. the fact that tarantino gave nicknames to many of his characters, from the jew hunter and aldo the apache to the bear jew (tarantino’s director friend, eli roth), and the little man (bj novak, from the office), just shows how he wanted these characters to be mythical. he wanted them to be characters that the opposite side spoke of and told stories about. and he even had characters say things to this effect, like a captured nazi general saying, “everyone in hitler’s army has heard of the bear jew.” this is an old trick that tarantino learned from his pulp fiction days, to have his characters pump up how big the story is with their dialogue. in pulp fiction, he would have characters talk about the brilliance of robbing a bank with a phone, or have sam jackson say, “i’ve been through too much shit today to give over this suitcase,” reminding us of the many challenges he encountered. here, in inglourious basterds, tarantino used dialogue not to pump up his story, but to give reputations to his characters. to make them seem larger than life.

another thing that he learned from making pulp fiction, over a decade before this movie (1994), is that you can have a series of different characters and be telling all of their stories one at a time, but have the other characters make appearances in each story. in other words, during the story that is devoted to colonel hans landa, soshanna appears in the background. and the same can be said during the story of the basterds trying to blow up the theater, with landa making an appearance at the theater. it’s not quite as obvious that he’s doing this here, as it was in pulp fiction, which shows that tarantino has learned to disguise his motives and intentions a little more, but it works to the same result. so for example, at the start of the movie, we are spending time with landa, in a wonderful sit down conversation where he basically terrorizes a milk farmer just through dialogue. at the end of it all, soshanna’s family is executed and she goes running away. and just like that we have been introduced to landa and spent time with him, listening to him talk, watching how smart and how manipulative he is, and seeing how menacing and evil he can be (he made the tough guy milk farmer cry), but we also simultaneously are seeing the back story on soshanna, and how she watched her family be executed and how she came to escape. it’s killing two birds with one stone and it works to perfection as the opening scene of the movie.

tarantino uses chapter titles to let us know which part of the story he’s in. that’s something he got from kill bill. i love how he grows with each movie he makes, always experimenting, and yet also always using things that he has learned about from his past experiences. with inglourious basterds, the story doesn’t jump around back in time, and fracture the narrative, the way pulp fiction did, but the title cards do help. they help to let us know which part of the story we are watching and who the featured character or what the featured event will be. the first title is “once upon a time in nazi occupied france,” which was originally tarantino’s working title for this movie. he is a fan of all of the “once upon a time in…” movies from the jet li movies about china and legend sun yat sen to the two sergio leone movies to tarantino’s own buddy, robert rodriguez’s film, once upon a time in mexico, which ended his desperado trilogy (tarantino was featured acting in desperado.) but here, in basterds, tarantino uses this once upon a time title as only a jumping off point and keeps going from there.

the second title is about the inglourious basterds themselves. we get to see them in action right away as they have captured a bunch of nazi prisoners and are now giving them the choice. either give them information or give them their scalps and lives. there’s one general who refuses, and aldo (brad pitt) gives him a little speech about most of them are happy to hear that. he then calls out the bear jew to take care of business. even the way the bear jew is hidden in a sort of cave, and how he just hear the noise of banging metal bats when he is called, as if an animal has been woken up, is pretty genious. it’s like the moving shaking cups of water and ripples in jurassic park to let the kids know a tyranosaurus has started walking around. and then there’s another nazi who does give information, to which aldo gives him a little monologue about one day taking off his uniform and why they still need to carve a swastica into his forehead. the monologues here are vintage tarantino.

from aldo the apache and his team, we go to shosanna, in present day, where she owns and operates a theater in france. she is approached by a nazi soldier who happens to be a war hero and he talks to her not only about his love for movies and german filmmakers, but also about his own accomplishments in battle. he paints such a vivid picture with his words, about what a bird’s nest is and how he was able to pick off large amount of soldiers each day for a three day period, that we can practically see the movie in our heads. remember in pulp fiction when uma thurman laid out the whole premise for her tv show pilot, fox force five? it’s just like that. we can easily imagine how this soldier’s story is being turned into a movie.

and it is this soldier’s fascination with soshanna, and the way she despises him so much, or shows him such little interest and attention, that makes him want her even more. soon he is convincing hitler’s propaganda president, joseph gerbils, to host the movie’s premier in soshanna’s theater. that brings her face to face with hans landa (played magnificently by oscar winner christoph waltz, in the performance that makes this movie more than any other.) landa, of course, is also the man who killed her entire family at the start of the film.

as the movie goes on, it heads into a fantastic fourth and fifth act. the first three acts are about meeting the characters and setting up their situations. the final two acts are about the big events. by the end of act three, the pieces are in motion for the theater premier to happen. the fourth act is about the characters trying to prepare for that, meeting their contact who will help them get inside, at an underground tavern. the staging of this little tunnel of a bar is dynamite and the standoff that ensues is right out of the end of reservoir dogs. once again, tarantino is relying on what he knows and what has worked for him in the past.

you might even say that the final act, at the theater, has elements of jackie brown in it. in that movie, everything came down to a handoff in a dressing room at a mall. and we got to see the handoff from multiple perspectives (almost like rashomon), of the different characters who were involved. well, in the final act of basterds, we also get to see all different points of view and all different things that are happening at the same time in various parts of the theater. there’s hans landa in a private room interviewing the german actress (diane kruger), having a cinerella moment of sorts. then there’s aldo’s men taking their seats, strapped with dynamite and planning how to break into the are where hitler is sitting. there’s also the black guy behind the stage, ready to set fire to all of the flammable film stock which is piled high. and finally, there is soshanna in the projectionist booth, overseeing the film and dealing with an unexpected visitor.

inglourious basterds is the movie that tarantino probably spent more time on and worked harder on than anything he has ever done before. he spent about ten years writing the script, stopping and starting, picking it up again, every so often, and making changes. he also wanted to make a movie called inglourious basterds for some time and was kicking around that title to be used for a movie about the vega brothers (travolta from pulp fiction and michael madsen from reservoir dogs.) those were the rumors, anyway. what is fact is that tarantino draws upon each of his past movie experiences to make this one. he uses qualities, tricks, and story ideas from nearly every movie he has made before and every one of them works. it’s a masterpiece of a movie, hardly tarantino’s best (pulp fiction will probably always hold that honor), but still an artistic and creative delight. the last line of the movie has a character talking about the “masterpiece,” and you know it’s meant to be tarantino himself, talking about this film. especially as the character stares right into the camera. it’s a fantastic movie that really delivers.