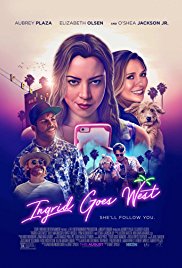 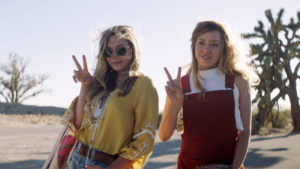 A fascinating movie that gets very dark at times, but is still a lot of fun.

This is one wild movie. It’s about a main character who is crazy in the worst kind of way. She is a stalker of strangers. Ingrid is completely delusional and has not boundaries or understanding of right and wrong. That’s what leads her to pepper spray a girl on her wedding day at the start of the film, and to kidnap another girl’s dog later on, in an attempt to win the girl over with friendship for returning the dog. It’s not often that we get a movie where the protagonist is off the rails, and even rarer that we get a movie that actually asks us to sympathize with that kind of character, but this movie does both. What we get here is a very dark, but interesting movie about how far a lie can be taken, and the lengths that someone will go to in order to get what they want.

Ingrid Goes West is one of the most fascinating and unique films around. It’s a movie where the main character is actually nuts. And yet we stay with her throughout the film and follow her into stalking and unhealthy obsession territory. We even side with her and feel for her throughout the film, and all of this is incredibly compelling. This is basically like watching Single White Female from the perspective of the killer, (the Jennifer Jason Leigh character.) If a film ever is bold enough to try something like this, it’s something like American Psycho, where you’re not supposed to side with the main character. In Ingrid Goes West, you most definitely are.

The opening scene of the movie has a woman getting married and using voice over to talk about her big day while we see photos she has posted all over social media. This is interspersed with quick shots of a girl crying in a car. That girl is Ingrid, (played by Aubrey Plaza, of TVs Parks and Recreation.) She’s a fun actress who usually chooses interesting films. From Scott Pilgrim Saves The World to Mike and Dave Need Wedding Dates to The To Do List, her movies are generally worthwhile, (although Dirty Grandpa is most certainly the exception.) Ingrid Goes West is by far her best role to date, (Scott Pilgrim is the best film on the list, but that is hardly an Aubrey Plaza movie or reach of a role for her.)

After the flashes of her crying in the car, Ingrid jumps out dressed in sweatpants, walks angrily through a tent, finds the girl who’s getting married, and says, “thanks for inviting me,” sarcastically before spraying the girl in the eyes with pepper spray. She tries to run away, but is tackled to the ground by another guest as the bride is shrieking in the background. And this is how the movie begins.

We pick up with Ingrid again after she has done a stint in a mental institution, and is being released. She sends texts to the girl she pepper sprayed, asking for forgiveness and understanding, but gets no responses back. Ingrid starts flipping through a magazine and reads an article about a woman out in California who seemingly has the perfect life. This woman is Taylor, played by Elizabeth Olson, and no sooner does Ingrid finish reading the article then does she look for Taylor on social media.

She finds Taylor on Facebook or Twitter, and starts following her instantly. The next thing you know, Ingrid is sending her comments in response to photos Taylor posts. Whenever Taylor posts an image of a dish she’s eating or coking, Ingrid responds with a comment or question. When Taylor says something to the effect of, “if you ever make it out here to California, you should go to…” Ingrid’s eyes light up. That’s what she’ll do. She’ll move to California.

This is very much how a crazy person thinks. Ingrid thinks she’s gonna get out there and meet up with Taylor and the two of them are going to become best friends. When she arrives in California, with a bag full of money from what her mom left her when she passed away, Ingrid immediately looks for an apartment to rent nearby to where Taylor lives. She meets Dan, (O’Shea Jackson Jr.,) a landlord who finds Ingrid interesting, (especially with the mysterious bag full of money she travels around with.) He rents the apartment to her under the condition that she doesn’t get a dog. Ingrid  doesn’t really care about Dan’s rules, and later on she does indeed keep a dog in the apartment.

Dan is a funny character. He’s a writer who is obsessed with Batman. He’s writing a Batman movie, just for fun, and throughout the movie he makes constant references to the superhero. When he gets intimate with a girl, he asks her to whisper to him, “Gotham needs you,” and he talks about how Batman doesn’t kill bad guys are even eliminate the threat. He just sends them to Arkham Asylum where they are released not too long after that. At one point, Dan asks Ingrid to play Catwoman in his script read through, and while she misses the reading, she does wear the catsuit for him later on and do an impression.

Dan is a fun character, but the heart of this movie is the story between Ingrid and Taylor. When Ingrid gets to California she tries to find Taylor as quickly as possible. First that means going to a restaurant she knows Taylor goes to and pretending that she is meeting Taylor there in order to ask questions about her to the staff and get some information. Soon Ingrid finds Taylor at a boutique and follows her home. When she sees that Taylor and her boyfriend have a dog, Ingrid devises a plan and kidnaps the dog. Then when Taylor and her boyfriend, Ezra (played by Wyatt Russell,) put up flyers and offer a reward, Ingrid calls them pretending to have found the dog.

That’s how she meets Taylor. When she refuses money, Taylor and Ezra invite her to dinner, where Ingrid sees and buys one of Ezra’s paintings. The next thing you know, she and Taylor are friends, hanging out and doing everything together. And everything seems to be going great until Taylor’s brother shows up to stay with them for a while. The brother sees right through Ingrid. He doesn’t like her from the get go, and when Ingrid tells stories about her boyfriend, Dan, Taylor’s brother, Nicky, says she’s just making up tales about an imaginary boyfriend.

It is Nicky who leads to Ingrid’s downfall. His distrust of her is real, and as much as we hate the character and consider him the villain, he’s also the only one who actually figures out what’s going on. What he does with that information is pretty devious, but even still, he’s smart and certainly a lot more clever than he looks or acts. And it’s his character that brings us into some pretty dark places, including Ingrid getting herself beat up, just to be able to tell Dan that Nicky did this to her. The movie gets really dark, the longer it goes on, but that’s not a bad thing. Sure, the humor is gone, (and there were some pretty funny scenes, like making a guy get down on the ground, literally, to take a picture,) but the story and the compelling direction it goes in more than makes up for it. This is a pretty cool film. It’s not for everyone, the same way that most movies which are really dark aren’t, but it’s certainly interesting.