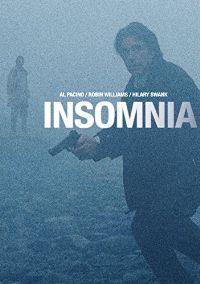 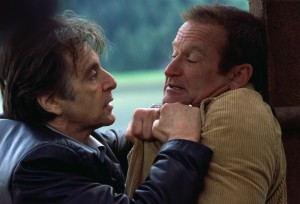 A pretty cool police-murder thriller with a new twist that gets the cop and the killer on the same side.

Insomnia is a great movie. it’s the third film by director Christopher Nolan, and follows up his breakthrough movie, memento, with another very clever and thrilling picture. like memento, this one is also a mystery / film noir, and is also incredibly dark. only it’s not quite as unconventional as that film to the point where it changes the way a movie has always been made. instead, this starts as a standard police thriller and then goes off the rails and into some very creative plot territory, while still staying in bounds.

the movie is about two detectives that get called out to alaska from california. they go out there to work the murder of a high school girl. and while these guys are experts in their field and have done this again and again, there is still something strange about bringing them all the way out from california, as if alaska doesn’t have it’s own detectives who could handle it. there’s a reason for all of that. back in california, the two of these guys are under investigation for police corruption, and one of them is about to roll over on the other one. their chief is doing them a favor by sending them away for a while, and getting them out of the media’s attention.

the two guys are detective Will Dormer (Al Pacino), and his partner, Hap Eckhart (Martin Donovan). when they get to alasksa, they are greeted by the young rookie cop who is very book smart, but not very experienced. this is ellie, played by hillary swank. and the killer, who we won’t meet until much later on, is played by robin williams. what a cast. pacino, willaims, and swank are all oscar winners. and nolan is a masterful director who never misses an opportunity to throw in a clever twist.

dormer and his partner get right on the case from the moment they land in alaska and set foot off their plane. they go to the police station before they even check into their hotel and want to start hearing about the case as quickly as possible. when they go to the girl’s apartment, dormer shows off why he’s such an expert in the field. he notices the slightest little things as he tries to find out who his victim is, such as that she has a few expensive clothing garments that someone with money had to have bought for her. these didn’t come from her high school boyfriend, randy. kay, the victim, was seeing somebody else.

day one of the investigation includes the police station and the girl’s house, and ends with dormer and hap going to their hotel, checking in, and realizing that even though it is incredibly light outside, it is actually night time. this will be an important theme of this movie, since dormer will be unable to adjust and to get any sleep due to the constant light outside his window. he and hap sit down at the hotel bar for dinner that first night, and discuss how hap is about to talk to internal affairs about his partner. these two are clearly at odds with each other, and this is the way their friendship is going to end.

that’s because the very next day, dormer shoots hap. it’s an accident of course, and it happens while the detectives are chasing the man who they suspect to be kay’s killer, through a foggy region. only hap doesn’t think it’s an accident, and when dormer approaches him, to try to help his partner out, hap is afraid of him. this changes everything. now suddenly dormer has to realize the way it looks, with hap about to go rat him out. dormer quickly stages the scene to make it look like the killer shot hap and even switches bullets around.

unfortunately, the problems don’t end there. the killer, walter finch (williams), is a local author who spends his time alone in a cabin and saw dormer shoot his partner. he also knows all about the investigation that’s taking place in california, just from reading the papers. finch knows what this will look like for dormer and so he has a card to play and he plays it well.

that card is blackmail. he gets dormer to help him out, and this is where the movie goes from a routine detective thriller to something pretty great. there’s a terrific scene on a ferry with the two stars meeting face to face. dormer has to advise finch on how to deal with the cops, and he ends up working both sides of the situation. especially when the police bring finch in for questioning and dormer and him go at it with each other, over the mentioning of randy. dormer tells finch to leave the boy out of it, but finch doesn’t exactly listen.

there are parts of the movie that seem too coincidental or lucky, like a scene where dormer ends up hiding in a bathtub from his own people and nearly gets caught. but overall this is a pretty good film. the performances are top notch with williams playing a psycho who you can kind of sympathize with at times. when he explains the way kay laughed at him and made him feel pathetic and how much that hurt him, you actually feel bad.

pacino is also in top form here. this is actually the last great movie he made. donnie brasco and the devil’s advocate were all behind him at this point. heat was long behind him. and with this one, he got to play a role he plays so well, an experienced, know it all detective. only unlike heat, where he was filled with energy and enthusiasm, here he is old and tired. the ferry scene is fantastic for a lot of reasons including dialogue and also how it changes the plot, but one more reason is the way pacino has to lean his face against a pole because he is just that exhausted. this is a very cool movie. even the landscape is terrific with an absolutely beautiful opening helicopter sequence, a pretty cool waterfall setting, and many other great locations mixed in. i saw the foreign version of this movie with stellan skarsgard that came before this film, and while the plot is essentially the same, in the hands of nolan, a good plot gets turned into a work of art. this is a very cool movie.