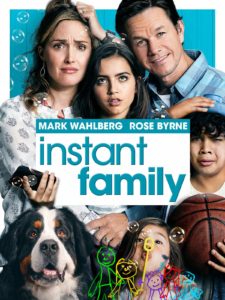 Instant Family is exactly what you would expect, when you consider that it’s by the same writer / director as the Daddy’s Home movies. It’s a family-friendly movie about adopting kids. Mark Wahlberg and Rose Byrne star as the couple who is basically dared into doing everything. First, in the opening scene, their family is over telling them that there’s no way they are having kids. So Pete and Ellie, (Wahlberg and Byrne,) start looking into adopting. Then when they have second thoughts and go to a family Thanksgiving meal, their family tells them they knew Pete and Ellie were not going to go through with it. And so Pete and Ellie take it on again. And then, when a teenage girl who is up for adoption calls their bluff, and says she knows they have no interest in adopting her or any other teen, they go ahead and adopt her. Talk about doing this all for the wrong reasons, literally just to prove others wrong. But it’s still kind of fun, and Octavia Spencer and Tig Navarro, as the adoption agency workers, bring an extra jolt of life to what could have otherwise been a pretty dull film. The movie is okay. Somewhat enjoyable, yet also pretty forgettable.

Mark Wahlberg’s Instant Family is an instantly forgettable movie, through and through. It’s not by any means a bad movie, this one definitely has heart. But it’s the kind of heart that doesn’t feel new, creative, or fresh at all. This is a movie about adoption, and all the challenges that go with it. It’s about starting a family with someone else’s kids. We’ve seen it before, in any one of those movie where the parents die and now the kids have to go live with someone else, (like Life As We Know It, with Katherine Heigl and Josh Dumael.) And there’s always some sort of a twist.

In that movie, the twist was that these two people who hated each other had to come together and be forced into parenthood, (and also, forced to be together.) In The Blind Side, it was about adopting an emotionally disabled older boy, who became a football player. In Manchester by the Sea, it was also about adopting an older boy, (high school age,) only that movie was told from the point of view of a youthful narrator, (Casey Affleck, who looks and acts much younger than he actually is,) who was struck with depression song guilt himself. In Instant Family, the twist is that when Mark Wahlberg’s character, Pete, and his wife, Ellie, (Rose Byrne,) want to adopt one girl, they find out that she comes in a package deal with two other kids. And so just like that, they go from having zero kids to three kids, (hence the title of the movie.)

This movie was written and directed by Sean Anders, a guy who has been building his way up the Hollywood ladder by making one awful film after another. Instant Family is the best thing he’s done. He’s the guy who wrote two of the worst sequels – so bad they killed their franchises – Horrible Bosses 2 and Dumb and Dumber To.  Anders directed that second Horrible Bosses movie, as well as That’s My Boy, (one of the worst Adam Sandler movies, and that’s saying something,) and the two Daddy’s Home movies. Those movies are perfect examples of how wrong Hollywood gets things sometimes… the Wahlberg – Will Ferrell movie that deserved a sequel was The Other Guys, not Daddy’s Home.

So so here we are, with Anders and Wahlberg, back together again in a movie that’s not a Daddy’s Home film. No Will Ferrell this time. And Wahlberg is an actor who attaches himself to directors without any care of the script… look at how he jumped into the Transformers movies because he liked Michael Bay, (from making Pain and Gain together,) or how he did four movies with Peter Berg (Mike 22, Patriots Day, Lone Survivor, and Deep Water Horizon,) and three with David O Russell, (Three Kings, The Fighter, and I Heart Huckabees.) So clearly he’s actor who picks projects based on comfort rather than intelligence. And this movie, Instant Family is no exception.

Now despite all these things (the lousy writer-director, the actor who takes anything, the familiar story,) the movie isn’t half bad. What it has going for it, is that it takes us through the entire adoption process, starting with when our two protagonists first have the idea of adopting. In fact, it all really begins when some friends of theirs joke around with them about how they are never going to have kids, in the opening scene. And that, of course, sets them off and gets them thinking.

So Pete and Ellie log into an adoption website and start looking at pictures of kids. Pete plays the tough guy who tries not to show a sensitive side with these pictures. And Ellie knows it. So she leaves the laptop screen opened and walks out of the room. And of course, Pete goes over to it, looks at the pictures, and starts crying. This is that kind of movie. Predictable, yet still kind of funny, and definitely light-hearted.

Pretty soon the two of them are taking classes with an adoption agency, where we meet other parents who are in the same situation. The only one who is memorable is a single woman who wants a big black high school age boy, so she can make him a football player. And yes, she gets called out for trying to do “The Blind Side,” again and again. But it’s the instructors who are the most memorable of all. Played by Octavia Spencer and Tig Notaro, these two have excellent banter, as they often argue against each other’s points.

We get a handful of adoption agency scenes where the soon-to-be-parents are learning the ins and outs of the gig. And then it’s off to the adoption fair where the kids are playing around and the adults approach them, looking to see who they have a connection with. Pete and Ellie make comments about the teens, who are all sitting around together, and how no one would want to adopt them. Everyone wants a small kid. And one of these teens approaches them. This is Lizzy, and she tells them that the teens can all hear what they’re slashing and know the deal by now, so aren’t exactly expecting to get adopted anytime soon.

And that’s exactly the kind of honesty Pete and Ellie are looking for.  So they end up adopting Lizzy. And when they find out that she is part of a package deal, and comes along with two younger siblings, Pete and Ellie adopt them too.  And now, the rest of the movie is about them starting s life together. The younger kids don’t have much going on in terms of story. The boy keeps getting injured and is very accident-prone. That’s about it. But Lizzy has story. She has a janitor at her high school who is sending her inappropriate pictures as she flirts with him, and then there’s the story of their birth mother who comes back in the picture. And how much Lizzy wants to leave Pete and Ellie and go back to her real mom instead.

So Lizzie’s stories dominate the second half of the movie. And maybe that’s simply because her stories are more interesting than anything that could be given to the younger kids. But there’s a bigger problem here. Pete and Ellie seem to make every important decision based on people doubting them. People say they won’t or can’t do something, and Pete and Ellie are out to prove them wrong. First it was in the opening scene about not having kids. Then it was around the Thanksgiving table, months later, when Pete and Ellie tell their family they decided to forget about adopting. The family responds with things like, “I knew it,” and “thank god,” and so Pete and Ellie take this as a challenge. And lastly, it happens all over again with Lizzy.  In fact, it’s the reason why they end up adopting Lizzy. Because she calls them out on it. Well, maybe making these important decisions based on other people doubting them, isn’t the best reason to be doing it. And maybe at some point this movie should have addressed that. It does, however, find time to have them address other issues, such as how everyone has problems, (they go back to visit with the parents of the adopted girl who gave an inspirational speech at the foster care center, and get a rude awakening) The movie has its merits, but it also has a handful of flaws. It’s a fine film, but at the same time, it’s not very memorable.