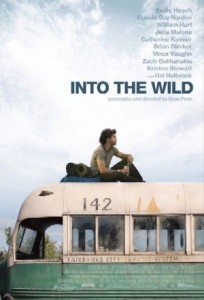 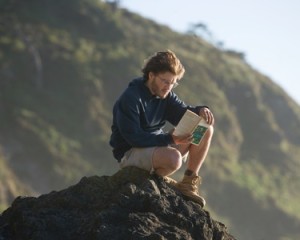 A pretty cool adventure movie about traveling, surviving, and meeting different people along the way.

It’s a movie about a guy who runs away from home and from his life and everyone he knows. this boy chris graduates from college and decides to take the ultimate celebration trip. he plans to live out by himself in the wild, surviving by whatever means necessary, and slowly making his way to alaska. the movie is smart to not make the film go overboard with his aloneness (between cast away, i am legend, moon, all is lost, and other, we don’t need another movie about a guy all by himself.) Instead, the storyline is about chris meeting different people along his journey and spending days with each one of them. each person represents a different member of his family, and that whole thing is pretty cool. the movie does get slow at times, but for the most part it tends to be interesting.

Into The Wild is an interesting movie. it’s not great, simply because there isn’t enough story or conflict other than the basic premise. yet the characters that Chris mccandless (emile hirsch) meets along his journey are all played by likeable actors and add something new to the path this young man is on. these characters and what they represent are the main strengths of the movie. this definitely feels like it could have been more of a nature film than anything else, and the movie deserves a lot of credit for not falling into that trap and going down the poetry, nature-loving route.

instead, it’s about a kid on a quest. this is the most extreme running away from home story there has ever been. chris decides one day that he is done living with his family and going down the usual road of living a normal life and having a boring job. he wants to find adventure and to find it on his own terms. he doesn’t just run away from his family, but actually cuts off all communication with them, never telling them a thing about where he is going or what he is doing.

at the start of the movie we meet chris, graduating from college and having a blast. when his name is announced to come up and receive his diploma, chris jumps up on the stage and gets the crowd roaring with laughter. clearly he is the class clown with lots of personality and energy. back home, however, is a different story. things aren’t so great with chris and his parents. as played by william hurt and marcia gay harden, chris’ mother and father constantly fight, and their fights are pretty bad. in one memorable and graphic scene, hurt is choking the mom on a bed, and both parents call for their kids. chris’ mom shouts out, “kids look what your father is doing,” and then chris’ father responds with, “look what your mother is making me do.” it’s no wonder chris wants out of there, fast.

he leaves his younger sister, carine, (played by jenna malone) behind. she is the one who was always closest to chris and doesn’t understand how her brother could leave her without saying anything or even trying to stay in touch. we listen to carine’s voice over throughout the movie, reminding us that chris has family members out there who are trying to find him. carine keeps us updated on the status of the search, telling us about when the parents sent out a search party and when they found chris’ car.

but chris’ family is mostly just featured at the start of the film. we do check in with them every now and again for quick flashes, but that’s about it. the reason for this is because the movie is about his new family. that’s what all of the characters he comes across represent. each one of them, who he spends a significant amount of time with, becomes a family member that he never had. this is made especially apparent when one of the characters, towards the end of the movie, asks to adopt him, and even spells out for us who he would be in chris’ life, (saying, “I could be like a grandfather.”)

long before that, however, chris finds an abandoned bus out in the wilderness, far away from any civilization. he makes this bus his home, and decides that he will go off into the world, have adventures, and then keep returning to the bus. it represents a sort of end to each chapter. chris doesn’t necesarily have a plan, other than to make it to alaska. his plan, besides that, is sort of to just wander the earth and meet people and get a collection of stories under his belt.

the first characters that chris comes across, after he has set out, are rainney and jan (catherine keener.) this is an older couple that believes in staying close to society, but not necessarily following societies rules. that’s why they are an on-again, off-again couple. they love spending time with chris and talking to him, but jan can’t imagine that what he’s doing is right to his parents and tries to convince him to turn around and go back home. she is obviously not successful with this.

at one point it seems like rainney and jan have broken up and ended their relationship, but when we join up with them later on, it is clear that this is just something they go through, the same way that most couples have fights. these two represent chris’ parents. they are the kinds of parents chris wishes he had, who fight by walking away from each other and taking time apart, but always make up afterwards.

another character who chris comes across and lives with for a while (probably up to about a week), is played by vince vaughn. this is wayne, a guy who works out on a farm, drives a tractor, and enjoys spending time at the local bar, flirting with the bartenders. he becomes like an older brother to chris, sharing laughs and stories while also delving out advice. the wayne story ends with an arrest, and we never find out what the charge was. i suppose that adds to the mystery of the whole thing.

there are plenty of other character who chris also spends time with and starts up relationships that could easily fit into his new family. when he meets kristin stewart, it seems like there might be some romance between them, but instead, we learn that he character is underage, and so she becomes more like a younger sister (just like carine, his real younger sister.) Hal holbrook plays an elderly man who is lonely and finds happiness when he is around chris. this is the character who wants to be chris’ grandfather. despite all of these relationships, the movie still does move a little too slowly at times, and lose our attention. it’s always interesting, but there needed to be a few more adventures. there’s a great white water rapids scene, which is followed by chris being briefly chased by the security in the area. more scenes like this, scattered throughout the film, would have added to the pace. it’s a good movie, but is just missing the push to make it great.