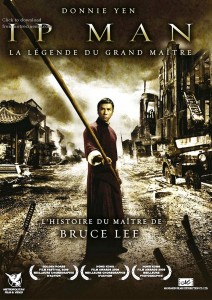 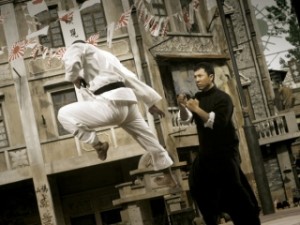 A very cool action movie with an entertaining story and some wonderful kung fu.

IP Man is a good movie with some terrific action. everything is well-filmed and fast moving here and what makes the movie really work is a story that brings in multiple enemies and multiple plot threads. Master IP (later called IP man), deals with villainous members of a Japanese martial arts school who come into town to prove that they are better at Kung Fu than the chinese. and when he’s not dealing with these guys, he’s dealing with the general who runs the japanese miltary and gives ip man challenges on a much larger scale, (such as taking on ten guys at once.) the result of all this is a movie that is loaded with action, villains, and interesting story lines. it all comes together nicely in a movie that is a lot of fun.

Ip Man is a pretty great kung fu movie. in america we call it martial arts. in china, they call it Kung Fu, and it’s really the same thing. only over there they just make it seem so much classier. this movie is about the old days in China, the time of the chinese – japanese conflicts and invasions, in the early 1900s. it reminds me a little bit of the once upon a time in china movies, the way it puts itself into real history. and like those movies (especailly once upon a time in china II), the action is superb.

the movie featured donnie yen playing master ip, a guy who was great in his formative years, but now lives a life of peacefulness and quiet with his wife and small child. master ip still spars every now and again with friends, but as far as using kung fu seriously, he gave that up a long time ago. this storyline is of course, very familiar. whether it’s being the best robber from the old days or smuggler or cop, it is one of the most cliched storylines around, but that’s because it works. i just recently saw two other movies that used it, contraband and blade runner, and nobody how many times it is recycled, it’s still going to work, because it gives us a built in back story about the character and the way he used to be.

despite master ip living a life of peace, we do get to see some kung fu early on, and that’s important. we need action at the start of the movie to get us into it. lots of movies wait too long to bring the action in, and that’s a major problem. other movies give us action at the start, but it’s really just watching a flash forward of something that will come later on in the film (like jet li’s fearless). that is not the right way to do it, because it is depriving us of an action scene that we should be seeing later. the right way is what this movie does, or jet li’s fist of legend, giving us an original action scene at the start of the film that fits into the plot.

here, the first action scene has one of ip’s friends come to visit and spar with him outside. the guys are both masters and his friend actually runs his own school and teaches students. ip wins the match easily, but both men are pretty good, and it’s a fun fight to watch. especially since it takes the guys into the courtyard where there is lots of space to move around.

after we finish with this scene, there are some funny repurcussions from it. a young guy who is the brother of one of ip’s friends was flying his kite near ip’s home during the time of the fight. this man saw everything and watched ip beat the teacher. the young man now reports back on what he saw to the people in the town, and this infuriates the teacher, claiming that his reputation is ruined. this part plays out more like comedy than anything else, and it’s light hearted and quick, which is exactly the way it should be.

soon we get a new conflict. men from japan are coming in to the town and want to start their own kung fu school there. they decide to take on whoever will accept their challenge first, to show off their abilities and make a reputation for themselves. there is one guy, in particular, who represents the bunch with all of the fights and he openly challenges anyone. the teacher, who ip beat earlier, is one of the people who accepts the challenge and is defeated. ip is called upon to help.

he resists as much as possible and doesn’t fight until these japanese men actually come to his home and challeng him there. at that point, ip’s wife realizes that this is a matter of national pride and gives her husband permission to fight, asking him to not break her things. a pretty cool fight ensues, and lots of things do get broken, with the japanese man constantly responding with, “i’ll pay,” whenever something breaks.

no sooner does this fight end, then another conflict springs up. this one involves the war and japan’s conquering of china. everyone, including ip, is now out of a job. he ends up doing some mining work for the japanese and when they ask for men to come and fight with them in a temple, ip again refuses. his good friend goes and never returns. ip then goes, hoping to find out what happened to his friend. when he gets there, he meets a new enemy. this manis a japanese general who looks down at the fights from above and watches as ip takes on ten men at once.

ip leaves the fighting temple and goes back to his town where he needs to rescue the people from those japanese guys that wanted to open their own school. they come back and bully the people, and even though ip has taught them, they still cannot stand up to these japanese. that’s when ip shows up and starts using weapons on them, including a giant spear, which he holds out so far, and moves around so quickly, that the japanese enemies cannot get anywhere near him.

all of this leads up to the final fight between ip and the general, which is heavily publicized and hyped all over the city. it’s a big fight, and i really like the way it is handled. as it happens, it is just one of many great fights in this movie. the action here is top notch, and what makes it espeically cool is that there is so much of it. i really like the way the movie basically tells two stories in one and has two sets of villains. there are the japanese who come in and want to setup a school there, and then there are the japanese generals who want to use the chinese for combat practice. the movie is very smart in the way it switches back between stories, going from one enemy to the other, so that we are constantly getting action scenes. another movie might have made the first half about one of the enemies and the second half about the other, basically making two different movies in one, each with a running time of half the film. ip man is smarter than that. it combines the two stories and intercuts between them to make it feel like it is all part of the same, single story. this stategy pays off well, and the movie is a lot of fun.