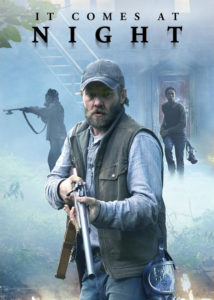 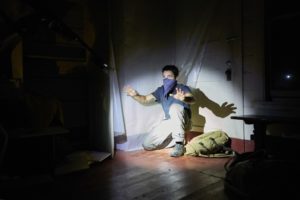 An apocalyptic thriller that is pretty good and scary up until it botches the ending, which actually has a tremendous ripple effect on the entire film.

This movie is spooky and and scary and definitely interesting. Until the end. The premise, about some kind of virus in the air that  is contagious and deadly and causes people to live an isolated life where they would rather kill others than get the disease, is entertaining. And most of the way through, this movie works. But the movie also features one of the biggest letdowns of an ending of all time. It is such a poor ending, infant, that it instantly drops the movie down a few pegs. Let’s put it this way, when the entire movie seems to be based on a simple premise and mystery, there better be an answer to that mystery at the end. Some kind of closure. This movie wants to make the case that it isn’t about that. It isn’t about the disease or the virus, and what it does to people… it’s about how people react to living in a world with the virus out there. Not buying it. Bad answers are better than no answers at all. This movie should have known that. It’s still a fine film, but it definitely leaves you disappointed.

It Comes At Night is a movie that breaks down what living in an apocalyptic society, where a plague of some sort has hit, might actually be like. It gives us the story of survival, and of two families coming together to live under one roof, because they have a better chance of survival that way. It gives us threats and scares, and some fascinating moments. But what it doesn’t give us is answers. About anything, other than how these people live. This movie is in many ways the exact opposite of A Quiet Place, the apocalyptic monster movie made one year after. That film also chronicled a family living secluded from the world during the aftermath of some sort of event. But it showed us what the event was, or at least what the creatures were like that came out of it. In It Comes At Night, we don’t get any creatures or revelations at all.

Its strange to think about it. If the movie is about people who become infected and turn into monsters, than we’re talking about a 28 Days Later / I Am Legend kind of thing. Which is fine. But it’s not. There are no monsters here. Nobody gets infected and then attacks. Instead, the only thing that happens is the humans who are not infected are terrified of those who are, and so they resort to keeping away and even killing the infected. The movie opens with such a scene, as a group of people take an elderly man out to the woods and shoot him. Then we meet the main characters. They are the ones who did the shooting. The old man was the grandfather of the family. The surviving members are Sarah, his daughter, Paul, (Joel Edgerton, the only star in this movie,) and their son, Travis.

We start spending a little time with the family, getting to know them and their routines, and then one night, someone breaks into their back room. The back room has a red door that separates it from the rest of the house. It is bright red, almost like blood, or like something out of the Shining. Red Rum. And it is the only way in or out of the house. Every other door or window is boarded up. When the couple hears noises coming from that room, Paul gets his gun and goes out there, down the long corridor that leads to the red door, and then through the red door. Say what you will about this movie, but the production design and staging of the way the interior of the house looks, is pretty fantastic.

On the other side of the door is a man named Will. Paul holds him at gunpoint and then takes Will outside and ties him to a tree with a bag over his head. The next day, he goes out and talks to him. Will tells him that like Paul, he has a family too. He has a wife and son, (the exact same dynamic as Paul. Will and his family have been running out of supplies, and so Will has come looking for abandoned houses. He thought this was one of them, and so he broke in. Paul takes all of this information back to his wife, and together they agree to invite Will’s family to come and live with them. The idea is that the threat of having a family out there, who know where more supplies are, is too great. What’s to stop that family from coming back and attacking if they get desperate enough? Plus Will says that he has tons of food that he can trade or bring to the table.

he And so Paul and Will head out together to go find Will’s family. On their way driving out to the house, they are attacked by two men who shoot at them. Paul gets underneath his pickup truck with his rifle and spots one of the men, before shooting. He kills the man. And when he looks up, he sees that Will has got the other one. Paul walks over and shoots him too. And this is really the only semi-action scene in the movie. Things get pretty heated at the end, and we’ll get to that a little bit later, but other than the climax, this is yet. And yet the movie still manages to be entertaining and exciting the whole way through.

The way it does this is by constantly reminding us of the threat and what’s out there. Only we don’t exactly know what’a out there. In fact, it doesn’t really seem like anything is out there. The title “It Comes At Night,” is incredibly misleading. It makes it sound like there’s some spirit or evil that attacks in the night time. Turns out there is no evil. It’s just people getting infected and dying. That’s all. This is not “It Follows,” where something really is in the air, transferring evil spirits and ghost killers who attack victim after victim. This isn’t Fallen, which is also about an airborne spirit out to kill. In this movie, the disease is airborne, but that’s all it is. A disease. Nothing actually comes at night. The only thing close is the idea that these people are afraid of the night, because that is when they think they would be most vulnerable, (hard to see in the dark.) And so they don’t go out at night.  But that’s it.

Getting back to the storyline, the two families do move in together, and we get a scene of them all sitting at the dining room table with Paul going over the house rules. He breaks them down in basic terms, such as that everybody needs to clean up after him or herself, and do the dishes after using them. We go outside with them the next day as Will teaches Travis how to cut firewood. And then Travis’ dog, (who was actually the grandfather’s dog,) runs away. Travis goes after him and Paul gets angry, considering the risk Travis just put them all through. That night, they hear sounds coming from the red room, and it turns out it’s the dog, returned home, who is now infected. Paul puts the dog down.

Only there’s more to the story. Travis tells the group that the red room door was opened when he found the dog. That leads the family to wanting to know who opened it. Paul recalls finding’s the young son, of the other family, Andrew, lying on the floor in the hallway, asleep. Travis woke Andrew up and helped him back to his parent’s bedroom, where Andrew crawled into bed with them. Travis thought nothing of all of this at the time. But the next night, after the dog incident, Travis heart nosies coming from Will and his family’s bedroom. He climbs up to the attic, where you can hear what is happening in the room below him, through the floorboards. And Travis listens in to the couple talking about how Andrew isn’t doing well, while Andrew is loudly crying.

Travis takes this to mean that maybe Andrew is infected. He goes and wakes his parents up and tells them everything, including the way he found Andrew on the floor. Paul now suits up, as does Sarah, and they go to see Will and his family. They want a look at Andrew to see whether or not the boy is infected. When Will refuses to open the door for a while, things get ugly. Paul ends up holding Will at gunpoint and then taking him and his family outside. It gets worse. So does the idea that Travis touched Andrew, and so if Andrew is infected then maybe Travis is too.

The movie is certainly not anti-climactic. it just ends in a very dark place, leaving you feel kind off empty inside. After all, no answers are given at all. We keep waiting for some kind of big climax. At the end of every monster movie, you see the monster, fully revealed. Here, there is no monster. The movie kind fo makes the point that the monster is us, and what we will do and become in order to survive. Its a little too symbolic and out there, and not enough literal. We needed more literal. Especially with a title like this one’s got. What comes at night? People looking for food and supplies? The ending is definitely a let down, and that carries a large ripple effect that knocks this otherwise pretty good movie down a few pegs. There were some great moments here, like when Paul questioned Travis about touching Andrew. But the ending could have been a whole lot better.