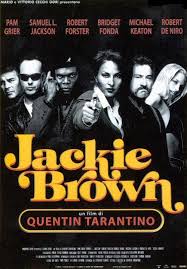 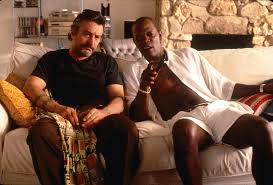 The story is interesting and the characters are great, but boy does this film move too slow.

This is a great, artistic gem of a movie, and a real throwback to films of the seventies and characters who still seem to be living in that time. It’s a crime movie based on an Elmore Leonard novel involving police busts, money handoffs, deal making, and betrayal. For director Quentin Tarantino, it’s his most mature movie, but also his most slow. This is the movie that is the most unlike any other Tarantino film. What that means is that if there are people out there who can’t stand Tarantino movies (too violent or too bloody, or whatever they would say,) maybe this is the one for them. For the rest of us, it’s a fine film with some terrific characters and dialogue. The only problem is that the film moves a little too slow. Scenes take their time and go off on tangents in ways that they don’t really need to. There’s a whole slew of scenes and moments that could have been cut from the second half to tighten up the pace a little, but aside from the time issue, this is definitely an entertaining film.

Jackie Brown is a smart and entertaining movie, the same way that all Tarantino films are, but there’s definitely something missing. Tarantino’s style. This film is not very violent, has no blood, and is barely funny in the ways that most of the filmmakers pictures are. At the time of this movie, Tarantino was coming off of Pulp Fiction, his best film to date, and was trying to make something vastly different. He succeeded. Tarantino wasn’t quite comfortable with his own style yet, and was more interested in pushing himself to make something as different from his usual work, as he could. On top of that, this was his first and only movie adapted from somebody else’s story, which limited Tarantino as to how far the events and ramifications could go. The result was that Tarantino made the most mature of his films, but also the slowest. The characters are fantastic, and the story and dialogue are pretty good too, but the plot line is dragged out to take way longer than it ever should have taken.

If anything, this is the Tarantino movie that is most like a Coen Brothers flick, save for how long this movie is. That Coen Brothers comment refers to the tone and humor. It’s definitely there, in this movie, only it’s not the same kind of humor that we usually get in a Tarantino film. The jokes all have a certain black comedy feel, where you cringe at the characters and feel bad for them, rather than laughing out loud at how crazy the situation they are involved in is. Think of Brad Pitt impersonating an Italian at the end of Inglorious Basterds or of Jamie Fox choosing a bright blue velvet outfit for himself in Django Unchained. That level of humor is just not here. Instead, what we get is some very real humor, like Lewis (Robert DeNiro) telling Ordell (Samuel L. Jackson,) that he felt bad after having sex with Melanie, since he thought Melanie was Ordell’s girlfriend. The one exception to this humor level comes early on in some scenes between Ordell and Beumont Livingston (Chris Tucker.) These scenes are absolutely hilarious, and Tucker deserves a lot of credit for that, putting a major stamp on this movie in a very limited role.

The film begins by giving us scene after scene of Ordell. There’s an opening sequence of Jackie Brown (Pam Grier) running through an airport (and why was she walking on a conveyor belt and then running later on, by the way? Was she not paying attention to time at first, or did she just not care?) After that quick scene of the airport, which seemed more about giving us the song “Across 110th Street,” than it did about plot relevance, we spend a lot of time with Ordell, to the point where one could actually mistake him for being the main character of the film. We watch Ordell and Luis sitting on a couch, watching a video, discussing guns. We watch them go to meet a bail bondsman, Max Cherry (Robert Forster,) and discuss bailing out Beumont. Then we watch Ordell go to meet Beumont and deal with him.

The Ordell and Beumont sequence that is so funny and really gives Tucker a chance to shine is mainly due to the excellent dialogue of Tarantino. You can often tell what parts of this movie were written by Tarantino and what parts were taken directly from Elmore Leonard, who wrote the novel “Rum Punch,” which this film is based on. The interaction in this scene is clearly Tarantino all the way, as both characters have a clear and convincing motivation. Ordell wants Beumont to come with him. Beumont wants to stay home and enjoy his new and temporary freedom, after having been bailed out. Ordell wins that argument. And then there’s another one down at the car. Ordell wants Beumont to get in the trunk. Beumont thinks that idea is ridiculous. Watching the banter between these characters is great fun.

From Beumont, we move on to Jackie Brown, herself. She is an airline flight attendant, working at Cabo Air, which is apparently the worst flight attendant job you can have. Jackie doesn’t have a choice. Her options are limited since she was busted for a felony involving her flight attendant job in the past. Now she works for this low paying airline and smuggles in money from Mexico for Ordell whenever he comes calling. She moves through the parking lot and gets busted by two ATF (Alcohol Tobacco Firearms) guys. Ray Nicolette (Michael Keaton,) is the lead in charge of this bust, and he tries to get Jackie to roll over and talk about Ordell.

Now what we have here are two very similar situations. There was the Beumont situation, which we learned about though the bail bondsman scene, and ended up with Beumont’s murder. Then there’s also the Jackie situation, where Ordell bails her out as well (for the exact same amount of money,) and seems to think that she might talk too. Ordell explains to Luis the reasons why he killed Beumont, and how he knew that Beumont wouildn’t be able to do the time and would turn Ordell in to the police instead. So far, everything seems on track, and Jackie handles herself with Ordell very differently than Beumont did. She uses the gun she lifted from Max Cherry, when he picked her up at the police station, and takes Ordell’s gun too. Now Jackie is in control.

Only she’s still got the ATF guys on her back, and that means she either needs to give them Ordell or else go to prison. That puts her in a tough spot. She tells Ordell that she has no plans of giving him up, and makes some demands on him, for which she would be willing to go to prison. He agrees. Then she comes up with a scheme of how they can still get his money into the country, even though the ATF guys will be watching her. The scheme involves telling those guys that it is a small amount coming in (fifty thousand,) letting them see the fifty thousand and bust her with the fifty thousand, while really she is bringing in a whole lot more (about five hundred thousand,) and just hiding it somewhere else. Jackie is actually hiding it in the same bag, but disguising it up underneath a bunch of clothing, which is a very risky move, but she explains her thinking behind it pretty well.

From the scheming and analyzing of the plan, with all parties involved (Ordell, The ATF guys, and even Max Cherry,) we get to the execution of the plan. At this point, we are well into the second half, and this is where the movie is really starting to take its time. Instead of moving faster, like most films start to do around this point, things are actually starting to drag. Now, I love the dressing room sequence, where we get to see the same scene from three different points of view, each time looking at it from a new character’s perspective, but other than that scene and the Luis – Melanie interactions, there’s a whole lot of fluff. There are scenes and ideas that didn’t need to happen and only made the movie take longer and move slower.

For one thing, there’s a trial run of the money exchange. We’ve spent so much time planning it, and then hearing about the plan, that they then feel the need to do a whole sequence about a practice run to see if it could actually work. That part is totally unnecessary. So are many of the conversations that take place afterwards. Instead of just calling over to Max Cherry’s office, Ordell and Cherry discuss what’s going to happen when he calls over there and who is going to answer the phone. Instead of just going into Cherry’s office, Ordell and Cherry discuss what’s going to happen when Ordell goes in and who will be there. It gets so wordy that at one point we say, “C’mon already. Stop talking about what you’re going to do, and just do it.” There’s one scene, in particular, where you can really see that Tarantino is going for art more than he is paying attention to time and pace. It’s a scene towards the end where Ray and Jackie are meeting about the exchange that happened. Their meeting is interrupted and Ray steps out of the office to speak with someone else. We stay with Jackie, in real time, as she just sits there in silence. Then Ray comes back in and tells her what he has learned. Another movie would have continued the conversation they were already having, with Ray saying, “Well, I’ll tell you what I know. I know that somebody was just killed.” That would have been a much more efficient way to go about it.

Despite it’s flawed pacing, (the movie comes in at two and a half hours, and could have easily been a two hour film,) Tarantino definitely gets a lot out of this movie. The money exchange sting is complicated, and by taking his time to explain it, the idea is actually made more manageable for the audience to understand. And then there are fantastic those characters. Luis, in particular, is terrific. DeNiro nails the role, not saying a whole lot, but playing a guy who seems so real, you can believe everything he says or does. Robert Forster is also pretty wonderful here. And the dialogue goes a long way. All of those scenes with Ordell asking questions, before taking action, for example, might be lengthy, but they do add to his character, and the caution he uses to show why he hasn’t been busted yet. The music is great, and the movie is artistic as hell. For Tarantino, this might be his tribute to Blaxpoitation films, but it is clearly his most mature and reserved movie to date.