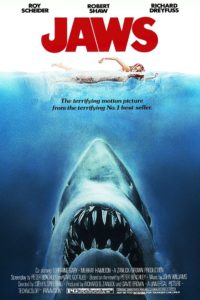 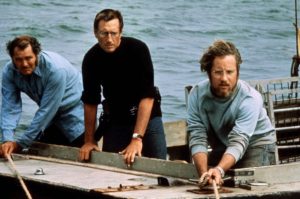 A pretty remarkable film, this one keeps things moving by featuring a first half devoted to the issue of whether or not to close the beach, and a second half that’s all about catching and killing the shark.

Jaws is a fantastic movie. There’s a reason why it’s a classic. That’s because this is so much more than a monster movie. It’s a movie about a town and the people in it who are not told the truth about what’s happening on their beach. The mayor is a villain here, trying to keep the beach opened as long as he can, only the movie actually sympathizes with him a little. It shows us that he’s doing it because he cares about the economy of the town since it is a beach community. But Brody, the chief of police in the town, knows better. He’s our protagonist, and he tries to persuade the mayor to shut the beach down and hire a man named Quint, to go after the shark. It takes three attacks, but eventually it works. What really makes this movie special is that it’s not all about the shark. The first half is about the town, and only the second half has our crew of three brave heroes board a boat and go out to see in pursuit of this monster. The combination of storytelling techniques really works.

Jaws is a great movie. It’s a shark film done in the manner that Hitchcock might have made it, had the classic movie director ever chosen to make a monster movie. Hitchcock believed in not showing much, and leaving the suspense up to the audience’s imagination. The less you see, the more you create images for yourself, and the images you create are far scarier than anything that could ever be put on screen. Director Steven Spielberg understands that concept well. Sure, he had some luck on his side (although it might have seemed like bad luck at the time,) in that the mechanical shark wasn’t working right, and so they couldn’t use it for much of the movie. But the result of showing less is an increase in tension and suspense.

In fact, we really don’t see much of the shark at all in the first half. And yet the attacks happen from the very opening scene. Two teenagers are out on the beach at night, skinny dipping. The girl goes in the water. The boy falls asleep on the sand, presumable drunk. That’s when we get the shark point of view, looking up through the water at the girl. And the next thing you know, we’re back above the surface watching this poor girl get bit and pulled under the water. It’s a pretty frightening opening.

Chief Martin Brody (Roy Scheider,) is our protagonist here, and he’s the head of the police department in this town. The only one who supersedes him with a higher level of authority is the mayor, Larry Vaughn. He’s the guy who really makes the decisions. And the issue up for debate is whether or not to close the beach. Brody brings in some experts to look at the body of the girl, after it washes up on shore, and they conclude that the girl was attacked by a shark. Only Vaughn isn’t buying it. This is a beach community and that’s where the town makes most of it’s money. Tourists come to town just to experience this beach. Closing the beach down would be catastrophic for the town. That’s what Mayor Vaughn thinks, anyway.

And so the beach stays opened, and that’s when another victim is attacked. This one is a little boy, in broad daylight, and the boy is also killed. His mother confronts Brody, after finding out about the girl who was killed there a week earlier. She slaps him in the face for knowing that the shark was out there and not doing anything about it. Instead, he let people go out there, into the water, to swim. At this point the beach is indeed closed down. Fishermen are brought in to try to catch the shark with a reward being placed for anyone who does.

An expert shark hunter named Quint (Robert Shaw,) shows up. Quint will take the job, but not for the price and reward that’s being offered. He wants a whole lot more, and won’t budge until the town meets his demands. And the mayor refuses. He thinks the people of the town can do it for themselves, and when they do catch a hammer head shark, he’s very relieved. The shark is big, but nowhere on the same level as the great white that they are looking for.

Matt Hooper, (Richard Dreyfus,) a marine bioligist, is working with Brody on the case. Hooper is the real scientist here who knows about these animals. He’s one of the first ones who looked at the earliest victim’s body and figured out it was a shark attack. Now Hooper insists that the hammer head shark which has been caught is not the one they are looking for,. He measures the shark’s mouth. Then he and Brody go down to where the shark’s body is being kept at night, and cut the body opened to reveal the recent contents. They don’t find anything to indicate that this is the shark they are looking for.

Brody tries to tell this to Mayor Vaughn, but has no success. Vaughn wants to keep the beach opened now, at all costs. That includes lying and downplayed the shark attacks to the cameras and news stories, and encouraging as many people to come to the beach for the July 4th weekend, as possible. He is thrilled to have the beach back opened in time for this once a summer holiday, and when nobody is going in the water, Vaughn does something about it. In a great villainous move, he goes up to a family sitting on a blanket and asks them, “why aren’t you going in the water?” The man starts to answer, but Vaughn cuts him off. He doesn’t want to hear a story or an excuse. Instead, he needs a favor. “Please go in the water,” he tells the father. And so the father takes his family into the water and everyone else follows. Nobody wanted to be the only one to go in, but now that one family goes in first and shows them all that it’s safe, the rest of the crowd goes too.

And then we get our third attack. This time, it’s Brody’s son who is nearly killed. He survives, but a man who is nearby and tries to help Brody’s son becomes the shark’s third victim. At this point, Brody is rightfully angry. Mayor Vaughn can tell this, and so he finally agrees to close the beach down and to hire Quint to get the job done. And that’s when the second half of our movie begins. Quint, Brody, and Hooper go out to sea together on Quint’s boat and go shark hunting.

Considering how this half (give or take,) of the movie is all set on the boat, its amazing the way Spielberg ends up keeping us in suspense and holding our attention. He does it by constantly having the shark attack the boat. The men move around from both upstairs, on the deck, to downstairs, in the galley. At one point at night, they even sit around telling old war stories, until the shark shows up and starts slamming into their boat. It all starts with the shark’s first appearance, popping up right next to Brody, where we get that famous line, “you’re gonna need a bigger boat.”

In this final act, we see what equates to an all out brawl between the men and the shark. It includes loads of tricks, such as them shooting a rope into the shark’s back with barrels attached to the rope that will float on the water’s surface. This lets the men know where the shark is, by spotting the barrels. Another trick has Hooper lock himself in a metal cage underwater, with a plan to stab the shark in the mouth with a needle at the end of a long stick. And while the men are coming up with all of these plans, the shark is going head on at the boat, ripping it to pieces. This makes for a thrilling ending to a pretty great movie.