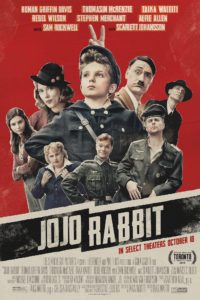 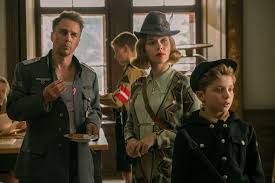 A somewhat funny and unusual movie, based on premise, this one is interesting, but does end up feeling more dramatic and less comedic than it should have.

This is a good movie that offers something different. There aren’t a whole lot of films out there about kids during the Holocaust, and the ones that there are, usually aren’t comedies. Not since Life Is Beautiful has a film gone this deep into the experience of living through that time, and found the right tone to do it with. Even here, (and also in that movie,) a comedic tone has plenty of drama and scariness in the background. In fact, this movie is only about half comedy, and the other half is actually pretty dramatic. The story works, and the characters are interesting. But some parts do still feel like they could have pushed the boundaries further. For example, a subplot about hiding a girl in the attic bring to mind the story of AnneFrank. And we never really see the Nazis do anything horrific. Perhaps that is intentionally done, so that we never feel like this movie stops being a comedy, but it definitely does feel like things could have been taken a little further.

To talk about JoJo Rabbit, you have to really start with the movie’s writer and director (and also one of its actors,) Taika Waititi. This guy is on the cutting edge of comedy. From his indie debut with Boy, to his breakout What We Do In The Shadows, (a vampire mocumentary that was so funny and original it inspired a TV show,) this guy just oozes talent. Thor: Ragnorak,  his biggest and most mainstream movie, was also his best. Normally when an indie director is given the reigns to a mainstream movie, (and a huge budget to play with,) the results don’t work out. With Waitit, he completely changed the tone of the Thor series and came away making the best Thor movie yet.

This guy really proved himself with Thor: Ragnorak, and from there, he got the worlds attention. So what does Waititi do next? He makes black comedy about Nazis. And he makes it about children. In fact, the movie is about a boy who has an imaginary friend that is Adolph Hitler. Not since Life is Beautiful (over twenty years ago,) has a movie been willing to take so much risk when it come to such a delicate subject matter. It’s hard to find anything that people are much sensitive about then the Nazis, but bringing kids into the mix, just tops it off.

That’s how it would seem, anyway. On the surface, this movie looks like either a very good idea (risk taking at its highest level,) or a very bad idea (going for a record of how many people it can offend.) Turns out, it falls somewhere in between. There’s nothing really offensive here, (we don’t see the Nazis do anything terrible, other than kill a bunny rabbit,) and the awful things they do are played more for comedy than for seriousness, (arming kids with giant guns.) The formula results in a movie that is part funny and part dramatic. If you’re going in for the laughs, this one isn’t nearly as humorous as one night expect. But it still has a lot going for if, including a heartwarming, sentimental story.

The same way that every superhero movie told from the villains point of view ends up making the villain into an anti-hero, (Venom, Joker, Suicide Squad – they all have a code to only kill bad guys – guys who are far worse than them,) Taika Waitit takes a similar approach here, with JoJo Rabbit. Jojo, is a ten year old boy who lives in Nazi Germany, but he’s not really a Nazi. He is just a confused little kid who wants to feel like he is a part of something. He wants to feel like he is in the club.

This innocence is established early on when JoJo refuses to kill a rabbit, when his Nazi superiors taunt him into doing so. JoJo runs away from them. Then after a pep talk from imaginary Hitler, he decides to take those guys on, and grabs a bomb from them before hurling it into the sky. The bomb injures JoJo and gets the Nazi superiors, including Sam Rockwell and Rebel Wilson, demoted. They are now sent out of the field and into an office. Jojo’s mother, played by Scarlett Johanson, comes to the office to ask the adults there to look out for JoJo. They give him a job distributing pamphlets.

Meanwhile, back at home, Jojos mother goes away for a loudly while, and that’s when he finds a girl hiding in their attic. She’s a Jewish girl, and it is Jojo’s mother who has hidden her there. He doesn’t know what to think. And he assumes the worst of this girl, the first Jew that he has ever come across. He thinks, for example, that she has horns. For a while, JoJo hates this girl. Maybe it’s because he feels like she is trying to replace his dead sister, who was about this girl’s age, (they actually used to be in the same class together.) Or maybe it’s because he feels that hiding her is betraying the cause that both he and his friends are a part of.

As the movie goes on, JoJo learns more and more that he did not know about his mom. First is the surprise that she is hiding a Jewish girl. Later, he finds that she is passing out papers which say “free Germany.” And all of this ends with quite a twist. Especially for poor JoJo who is left in a state of sadness and confusion. He doesn’t know if the Nazis are the enemy or if the Jews are the enemy, but if it’s the Jews, then he’s got one living at home with him, upstairs in the attic.

Jojo and this girl have a strange relationship, mostly fueled by his anger about everything they is happening all around him. He takes his anger out on this girl more than once. At one point, he writes her a letter, pretending it’s from her boyfriend. In the letter, the boyfriend breaks up with her. When the girl starts crying,  JoJo quickly changes gears and tells her that another letter arrived, and this one says the boyfriend wants her back. It’s funny that JoJo won’t just admit that the first letter was a fake, but instead has to write a second letter just to reverse the damage done by the first.

As the movie goes on, the threat of the Nazis becomes more and more real. First, there’s the situation that happens to Jojo’s mother. And then there’s the arrival of the Gustspo (German police,) at Jojo’s house. They come in (with Stephen Merchant leading them,) and interrogate both JoJo and Elsa. She is no longer hiding now, but is impersonating Jojo’s dead sister. She has all of the passports and paperwork to prove her identity. But there’s just one problem. She doesn’t know the girls date of birth. This becomes a new obstacle that is handled by Captain Klenzendorf, who turns out to have a side to him that we did not expect.

The movie ends with a climactic battle of sorts, where bombs and gunfire are going off in the streets. But it’s the Germans losing, and it’s more of a throwing in the towel and surrendering situation then it is much of a fight. And we are left with the joy of the Germans being crushed, and the good guys winning. The movie works because it leads us in the direction of hoping for that all along. JoJo might be in Nazi Germany, but he spends the movie surrounded by adults who are more kind-hearted then they are Nazis. First there’s his mother, and then later, it’s Captain Klenzendorf. These figures help make the experience of being here with JoJo, a little less horrific. But the movie definitely doesn’t shy away from the threat and awfulness of being there. What it doesn’t have quite enough of is comedy. I suppose that goes with the territory, when you make a movie about Nazis. It’s a good film, but definitely a little slow at times, and not quite as gripping as one might have hoped for.