Jumanji, Welcome to the Jungle *** 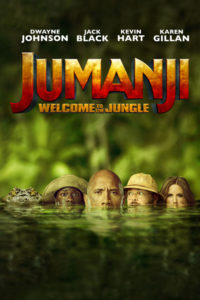 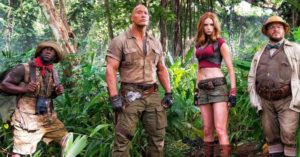 Better than one might expect, but still far from great, this one has some clever ideas (involving a video game version of the classic story,) and a fun performance by Jack Black as a girl trapped in his body, but otherwise it’s pretty generic stuff.

Here’s an okay movie, that is funny in all the right parts and features a very likable cast, but still feels like the most important ingredients are missing. The villain is weak and the mission is basically a series of cliches. Even the action and CGI aren’t so great. But on the plus side, the characters and actors here do make things fun. Each actor is playing the part of an action movie persona in the form of a video game avatar character. And the movie gets some major mileage out of the idea of changing the board game to a video game. As a light hearted, fun movie, this one is fine. But it’s far from anything special or great.

The Rock is a fun actor but he’s B movie material when it comes to the quality of his films, all the way. Since The Rundown, nearly a decade ago, he hasn’t made a movie that was genuinely a good film, (and even the Rundown is questionable, for that.) Sure, the Fast and the Furious movies are fun (especially the fifth one, where The Rock made his debut into the series,) but they are also pretty dopey. The same can be said about pretty much all of the Rock’s films. San Andreas was entertaining, but silly. I imagine Rampage is too. And those are the ones that might be worth watching, (unlike movies such as Baywatch or Central Intelligence.) So, knowing what movies featuring the Rock are like, Jumanji and how it turns out, really comes as no surprise. It’s an okay movie, with some laughs and some fun, but really not much depth at all.

The movie is a quasi-sequel to the Robin Williams film from about two decades ago. That movie was Jumanji. This one is Jumanji: Welcome to the Jungle. The only reference to the earlier film is that at one point they find a campsite and supplies that used to belong to Alan Parish, (the Williams character,) and there is some brief talk about who Parish was. But for the most part, this movie exists on its own and wants to be its own thing. It wants to be the start of a franchise, and that’s exactly what it accomplishes, (they are already at work on the sequel, featuring the same cast.) All things considered, they could have done a lot worse. For one thing, the casting itself is pretty prefect.

The Rock is a big, muscular dude who looks right out of an action video game, with his tremendous stature and shaved head. So does Kevin Hart, as the short, black sidekick. And then there’s Jack Black, short and fat, and aging, with glasses and a bears. He looks like an older archaeologist. And each of them brings their own persona to the characters. Black and Hart, in particular, are comedians, each capable of headlining their own film. That being said, Black works best when part of an ensemble, as he proved with Tropic Thunder, (his best role to date.) And then there’s Karen Gillan, the fourth member of the pack, straight off her red hot success with the Guardians of the Galaxy movies, (she plays Nebula.) Gillan might not have the same larger than life persona as the other actors in the group, but she’s also the biggest rising star of the bunch.

The movie gets creative with one main idea. It turns Jumanji into a video game. What that means is that instead of a bunch of kids sitting around playing a board game and then watching animals run around behind them, these kids start up the game in a basement detention situation, and are then transported into the jungle. And they are not themselves. Each one of them has become an avatar, or another character. That’s how we get the faces of The Rock, Jack Black, etc. It’s fun for a number of reasons. For one thing, it introduces us to a whole set of other characters and stories before we get anywhere near the jungle. For another, it really points out what perfect adventure seeking characters we have in front of us here, that these would be the character who the game has chosen for an action packed jungle exploration.

Another cool thing about the video game idea is that it gives us statistics on each player. When they bop they’re chest area, a rectangle box flies up into the air and for each one of them, it lists out their strengths and weaknesses. So, for example, the Kevin Hart character, Fridge, finds out that his weakness is cake and that his strength is carrying weapons for other people. He’s basically a glorified caddy. The funny thing is that back in the real world, he’s this tough, star of the show, football star. And the nerdy guy who worships him is now inside the body of The Rock, who is the very character that Fridge is carrying weapons for. So the movie definitely has some fun with that.

Aside from the avatar business, the other great thing about this movie is Jack Black’s portrayal of a woman inside of a man’s body. He plays Bethany, the cool high school girl who loves boys and her phone and has no time for anything serious. And here, he isn’t just playing a woman, but is playing a woman who is stuck in the body of a man and freaking out about it. We’ve seen this kind of thing before, in movies like The Hot Chick, with Rob Sneider and it’s usually pretty dumb. Only here, Jack Black really puts in the effort and gets the mannerisms and persona down, just right.

Black has two fantastic scenes that stand out above the rest. The first is when he has to urinate for the first time, as a woman in a man’s body. He has no idea how the equipment works and needs to be guided on it by Kevin Hart. His reactions are priceless. His second great scene comes when he needs to show the other girl, Ruby Roundhouse (Gillan,) how to flirt. She’s an attractive woman, but Black showing her is a middle aged man pretending he is a woman and demonstrating flirtatious techniques. It’s another great moment.

But for everything cool about this movie, there is about an equal amount that doesn’t work at all. And unfortunately those are often the more important things. For example, the villain. I love Bobby Canavale, but as a villain, he is just in over his head. We learned that from Spy, the great Melissa McCarthy / Paul Feig film. He’s even worse here. Canavale has pretty much no dialogue and is just there to let slithering creatures like snakes and spiders crawl into his ears and around his neck. He doesn’t do anything menacing, and doesn’t really seem like much of a villain at all. And his henchmen, a bunch of bike riding guys who all look exactly the same, aren’t much better.

Another example of something that doesn’t work is the actual mission. The point of what they’re doing is to find a jewel and deliver it into the heart of a mountain. The way all of this plays out is a lot like another Rock movie, Moana. There, the mission was addressed and clarified throughout the film, (although I still am not sure that she needed to find Maui and sail him across the sea to deliver the heart, instead of just doing it herself,) but at least they painted a picture for us again and again of what Moana needed to do and why. Here, the mission seems like the handling of a macguffin, (something that really doesn’t matter and only exists so that the hero has a reason to go from point A to point B.)

The movie is enjoyable, in terms of a light hearted, sometimes funny viewing, but it’s not really anything more than that. The action is certainly not great, like one might have hoped for. There are hippos, rhinos, and elephants who attack, and the CGI is so heavy that not a bit of it looks or feels anything close to real. Computer effects have come a long way over the past two decades or so, in terms of giving us motion capture characters and performances, (thank you Andy Serkis,) but in terms of creating threatening creatures, it has gone in the other direction. That’s why the dinosaurs in Jurassic World, for example, are so much more threatening and believable than those in Jurassic World. So the action, villain, and mission are kind fo weak here, but at least the comedy is good. In that area, the movie definitely delivers.