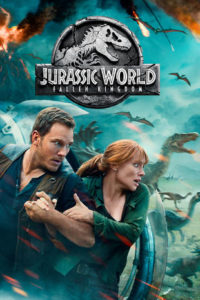 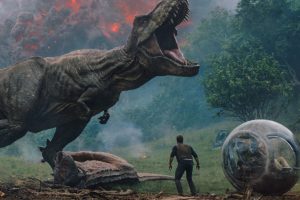 a movie with very little to offer, this story about the dinosaurs being moved off the island and then sold at an auction leaves much to be desired.

Jurassic World: Fallen Kingdom is garbage. This is a movie with an awesome incredibly thin plot that goes in the exact wrong directions. The movie is composed of two completely different halves, and neither one of them works. In the first half, our characters go back to the island to rescue the dinosaurs, because a volcano is about to erupt. But they have no plan of where to bring these dinos, or what to do with them. And that leads us to the second half, which is an auction in a mansion. The setting is cool, but the story has nothing interesting to offer. Even the dinosaur attacks are pretty boring.

Jurassic World: Fallen Kingdom is a movie that was made for one reason only… money. Like the characters in the movie who will do anything for money, including selling a dinosaur they just created, before making a copy or taking safety precautions, this behind the scenes situation was all about greed. The first movie made a ton of money, more than anyone expected, so why not make a sequel? But the answer is very much like what happened with the original Jurassic Park trilogy from the nineties. The first one was terrific and a new sensation in creativity, but the sequel was a dull retread, just trying to cash in. The answer is, that unless you can do something equally good or better with the sequel, don’t make it.

With Fallen Kingdom, the premise behind the movie is that the park from the last film, which was called Jurassic World, has been evacuated and left on its own. And now scientists have discovered that the animals are on an island which has a volcano that is on the verge of erupting. Everything on the island is about to be wiped out. So it’s up to our heroes to go and save the dinosaurs. That is the extent of how thin the plot is. Granted this storyline about saving the dinos from the island and volcano only takes up the first half of the film. But the bad news here is that the second half is actually much much worse.

The common factor in the first movie of each trilogy (Jurassic Park and Jurassic World,) is that both were about fully functional theme parks that either were opened to the public, or were about to be opened to the public. That’s what we want to see. The park itself, in all its glory. It’s the main reason why Jurassic World (the Chris Pratt film,) was good. But this second movie only takes us to the island and park, after it has been shut down and deserted. We’ve seen that before. We saw it in both The Lost World and Jurassic Park III. It’s nothing new. Both Jurassic Park and Jurassic World offered us new experiences. Jurassic Park told the story of a sort of try-out test-run, and Jurassic World showed us what it would look like if it really was operational. Clearly, giving us something new, about the park being functional, is the trick. But this movie decided to copy other ones. And hardly the two films in the series that you would ever want to copy. It copied the two bad movies instead of either of the two good movies. What a mistake.

The way all of this happens is that Claire Dearing, (Bryce Dallas Howard,) is called to the home of Benjamin Lockwood, a wealthy old man. This guy is a well-known industry mogul. Getting the call to go out to his house makes Claire’s eyes light up. And when she gets there, she meets Lockwood’s personal assistant, Eli. He’s a young man who seems to be plotting something as he asks for Claire’s help. And Lockwood (James Cromwell,) comes out to talk with her himself. Apparently he and John Hammond, the founder of the original Jurassic Park, were once partners. They came up with all of the technology and ideas together. And now Lockwood carries around the same kind of fly trapped in amber sample, at the end of his wheelchair, that Hammond carried on his staff. It’s a nice touch.

But other than that little tribute to the first movie, there’s nothing really interesting going on here. Jeff Goldblum pops up for one quick moment at the beginning and one quick moment at the end, and it feels completely forced. Especially since the trailers all show him and make it seem like he’s in more of the movie. But this film doesn’t have time for any real nostalgia. It wants to be about the new, young audience, and so it spends most of its time with Pratt and Howard, making stupid jokes.

So now we get the inevitable scene where Claire goes to find Owen Grady, (Pratt,) to ask for his help, and where he turns her down. And of course once she leaves, he goes back to watch old videos of Blue, the baby raptor he helped raise, and this motivates him to take the mission on. The exact same thing happened in Avengers Endgame with Tony Stark rejecting the teams proposal, then looking at an old photo of him and Peter Parker before deciding to help. Only there, the stakes were believable, since Tony’s actions lead to Peter being killed. Here, it’s just a cliched move that shows us Owen playing with Blue as a baby. Sure, it’s cute, but considering that Owen hasn’t seen this raptor in years, it probably wouldn’t have the effect this movie imagines.

So our characters take s trip to the island, and right away you can spot the bad guys simply by the looks on their faces. Our heroes go and find Blue, and then the volcano starts erupting.  So now we have this big action set piece that’s in all the trailers, of Owen running down the side of the volcano with pieces of lava falling all around him, as dinosaurs come running past him, a cloud of smoke chases after him, and two other characters, (Claire and Justice Smith, the actor who went on to star in Detective Pikachu,) rolling down the side of the mountain in one of those glass sphere vehicles from the previous movie. The action scene looks great, but it doesn’t have enough emotional weight for us to really care. Let’s put it this way, computer effects are used so much here, that not a bit of the scene feels real or believable. You want to do this right, how about put us, the audience, inside that bubble vehicle. Let us know what it feels like to be in there before it starts moving, and then once it does start moving. This movie is so focused on the spectacle that it forgets about the details.

And then our characters are onto the evil scheme of people who are selling these dinosaurs at an auction to the highest bidder. But here’s a question… why are these buyers so bad? They rescued the creatures or financed the rescue mission, and now they want to purchase them. It’s not like anyone else is reaching out to take the dinos, like a zoo. This isn’t Indiana Jones shouting, “that artifact belongs in a museum.” Here, there aren’t any alternatives. If there are, then they certainly aren’t explained. We don’t learn what the buyers plan to do with the dinos, and we also don’t learn what the good guys, Owen and Claire, hope to do with them. So basically this movie doesn’t give us anything. We are just meant to believe that the good guys want to help the dinosaurs and the bad guys are bad simply because they are greedy.

The second half of the movie takes place in the mansion, where the auction is being held. We get introduced to a third bad guy, the one bringing the buyers to the mansion and running the auction, (played by Tony Jones.) The first two bad guys are the hunter, (the always great Ted Levine,) and the businessman. They all show up here, at the big house, and it’s basically just chases around hallways and large rooms with dinosaurs attacking. Understandably, this movie wanted to be very different from the previous film, so that people wouldn’t say it was just the same thing all over again, but maybe that was a mistake. If the last movie had a formula that worked, then why not do something similar? Why not expand on those ideas more, instead of going in a totally different direction?

If the park is what sells, and people want to see the park, then why move the story away from it. In Jurassic World: Fallen Kingdom, the park is non-existent. Instead, we have a first half that’s on the island as it falls apart and a second half in a mansion. And that’s it. A better idea might have been an international version of the park being proposed or opened in a country like China or Japan where our heroes have to go down there and convince people that it’s a very bad idea. But unbeknownst to them, the park is already built and ready to go. All safety precautions have been taken so that the events of other movies don’t repeat. And yet because these park employees are trying to kill our heroes before they can spread the message to not open the park, something goes wrong (a gun goes off in the worst possible place or something,) and the dinos get released. That would have been a much better film. But without a park to play in, Jurassic World: Fallen Kingdom is a pretty lifeless bore.