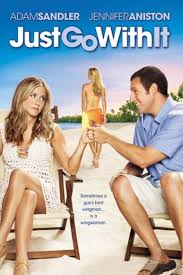 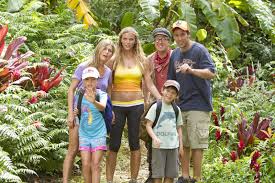 Another Adam Sandler disappointment, this one more romantic comedy than most, with a cover-up story used in the pursuit of a hot chick.

We’ve seen this movie before. again and again. a guy wants to get a hot chick and sees an opportunity, but only if he makes something up right then and there. so he does, in the moment, and then spends the rest of the movie keeping the lie going. sometimes it’s as simple as that he’s a doctor or is a distant cousin of the bride’s (wedding crashers), but it’s always a stupid lie that just kicks off a clichéd premise. part of the reason why these stories are appealing is because they are both simple and realistic. guys are horny and like the challenge of getting a hot girl, and are easily capable of doing such things. I once did something like this myself, back in college, telling a girl that I was a photo so that she would model for me and I could take about twenty provocative photos of her. it worked, and it was fun, but it was certainly stupid as well.

in the new Adam Sandler movie, just go with it, which I’m sad to say is actually a step up for Sandler movies these days, the lie is that Danny (Sandler) is divorced. the premise is that Danny lives his life by pretending that he is married to an abusive woman and sleeping with single women who feel for him and want to sleep with a married man with no strings attached afterwards. so Danny carries around a fake wedding band. and one day, he’s not wearing it, sleeps with a woman named palmer, and then realizes afterwards, that he really likes her. the only problem is that she finds the ring in his Pocket and now thinks he’s married. so he makes up on the spot that he’s divorced.

so far this plot is acceptable. if Danny’s whole goal has always just been to sleep with hot chicks and then have no strings attached, then he shouldn’t really care that palmer found the ring after he has already slept with her. but we’re supposed to buy into the idea that he thinks she is special and might be the one. and why, by the way, was he not wearing the ring when he met her, like he does with all the other women? I guess it’s because he was at a sort of family function so he wasn’t going to wear the ring around all these people who know him and know that he’s not married. but how then, can he pretend he is divorced if palmer knows his family and can really just ask them about the truth? no matter how you look at it, this premise has holes and that’s a bit of a problem.

but if we’re to take the movie’s own advice and “just go with it,” then the storyline has Danny beg his plastic surgeon doctor partner, Katherine (Jennifer Aniston), to Pose as his ex-wife. so she does. why? because palmer says if she and Danny are going to have a real shot at something, she needs to meet his ex-wife and see that she is not really still in love with him. where to begin? first of all, Danny and palmer are basically going on a second date after having a one night stand, and for that second date she wants to meet his ex-wife? any other guy would have jealous psycho warning bells going off in his head right now. and why was she going through his Pockets by the way?

Not only are there a lot of questions and a lot of ridiculous things happening so far, but there are also plenty of ways Danny could get out of every problem he puts himself into. she wants to meet his ex-wife, well guess what? she lives in another country these days. or sorry, we don’t really talk anymore. we don’t like each other. that’s why we’re getting divorced. newsflash: most divorced couples aren’t still friends afterwards. but palmer assumes that Danny and his ex-wife are? this movie is so filled with problems that I can’t even get past the first parts of the premise without having to stop over and over again to ridicule it’s stupidity.

moving on, palmer overhears Katherine talking on the phone about her kids. the Katherine character really does have two kids. and palmer hearing this looks at Danny to question him. and instead of saying, “yeah, she has kids with a previous husband,” or something, Danny just builds more onto his lies and tells palmer that the kids are his. so now palmer wants to meet the kids. this just gets dumber and dumber.

now the kids are in on the lie. only in order to get them to agree to go along with it, the kids blackmail Danny into taking them to Hawaii to swim with Dolphins. so now everybody is going to Hawaii. Danny, palmer, his fake ex-wife Katherine, and his fake kids. from the writer of this movie’s perspective, all of this lying and blackmailing and strategic manipulating has been just to get them to a Hawaiian island where they can have a vacation resort movie for the rest of the way, like been stiller had while he also pursued a lie in the remake of the heartbreak kid from a few years ago.

The rest of the movie just features all of these characters on vacation. the obvious destination is that Danny and Katherine will slowly drift together. if not, then what is the point of having Jennifer Anniston in this movie? She’s either the female romantic lead or just a side character friend. and big name stars don’t usually take the back seat to play a side character friend. but even with all the little twists and lies and loopholes and complications, the movie doesn’t seem to have enough.

and it knows it too, which is why it adds in other characters. there’s Danny’s best friend and cousin who shows up on the vacation to pose as a character named Dolph, who is supposedly the man Katherine is with. this guy is an idiot, doing a bad German accent, and he becomes the comic relief. and if that addition wasn’t enough, Katherine also runs into her long time nemesis, a woman named Devlin (Nicole Kidman), who is on vacation here as well with her husband, the I man. just to complicate things a little more, Katherine tells Devlin that she is currently married to Danny.

I suppose at a certain Point, all of the lies and plot intricacies do end up getting a little funny. for example, Danny has told palmer that Katherine’s name is Devlin. so now when they meet the real Devlin (Kidman), palmer is standing face to face with two women she thinks are both named Devlin. and when she questions it and risks Kidman telling her that Katherine’s name is not really Devlin, Dolph shows up and tackles palmer into the Pool and then holds her down and nearly drowns her. what the hell, right? that’s what palmer should be saying, anyway. but she never does which goes right along the rest of the stupidity in this movie. it’s not terrible because the plot gets so filled with lies and twists that it’s somewhat fun just to follow. but the jokes on hand are certainly stupid. the movie is a step up for Sandler movies because this one actually has a plot. finally. his last movie I saw, grown ups, was a lousy excuse to team up a bunch of old SNL cast members and throw them all on vacation together and hope for the best. this movie is certainly better than that. yet it’s “one big lie that keeps going and going” premise is so clichéd and predictable that the movie is ultimately an unfunny waste of time.