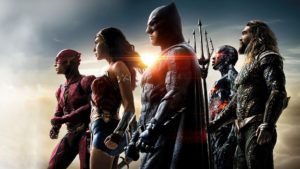 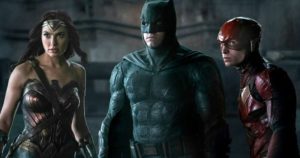 The humor is bad and the dialogue is clunky, but at least they finally got a DCEU movie to actually look good.

This might not be a good movie, but it’s a lot better than most of the films in this series that have come before it. What we have here is a B movie that looks pretty good. The story and dialogue aren’t all that smart, and the humor isn’t great, but when it comes to action and color, this movie actually delivers. That’ right… color. The one thing that has been notably absent from most of the movies in the series. This movie actually gets it right. And boy does that go a long way. The story is basically Batman and Wonder Woman trying to work together to put a team in place that can take on the villain Steppenwolf, and stop him from completing his quest to collect all three mother boxes, (sounds a little like Thanos and his quest to collect all six infinity stones, right?) This movie isn’t half as smart as that one, and doesn’t try or pretend to be. The mother boxes are a clear macguffin and the villain has no motivation, but the action scenes are enough to make this movie kind of fun. Sometimes, that’s really all you need.

Let’s start with this… Ben Affleck’s Batman is the perfect version for this B movie entry into the series. There’s nothing great about Affleck’s performance, or about the character he portrays in the manner he does, but that’s just it. There’s nothing great about this movie or the DCEU (DC Extended Universe, basically the DC comics movies,) in general. Man of Steel was pretty good, but ever since then it’s been a situation of movies that are just barely acceptable. They aren’t very good, (like the Michael Keaton or Christian Bale Batman films,) but they aren’t horrible either (like the Val Kilmer or George Clooney Batman movies.) They exist as movies that don’t require much thought, but sure do have a lot of spectacle. B movies that are fun to look at, but not much more.

And Affleck plays the character as an expressionless, jaded guy who has seen it all. He is a billionaire playboy, after all, but we’re used to seeing him dark and brooding, and this version of the character isn’t really either one. Here, in the Justice League, he’s surrounded by other characters with all sorts of super powers, and his super power is that he never seems impressed. The truth is, as the unofficial leader of the Justice League (in this movie, anyway,) one has to question why he, the guy without any powers, is put in charge. The obvious reason, from a behind the scenes angle, is that Affleck is the biggest star on board here. And that’s why he gets the most screen time. But that’s enough for the other characters who question him. “What exactly is your super power” The Flash asks him. Batman’s answer… “I’m rich.”

And of course it’s true. Rich means he’s got all the weapons and tools and he’s the owner of the big space that becomes the Justice League hideout. It’s the reason why Tony Stark can be the leader of the Avengers, (as much as the movies try to convince us that Captain America is the leader, simply because he was in the comics, we know better.) Stark has no super powers either. In fact, he’s very similar to Batman, being a billionaire with technology and a self-made suit. Only he’s about a thousand times more intelligent and more funny. And that’s why this Batman is right for this movie. It’s not a super smart or a super funny movie, and it doesn’t pretend to be.

What this movie does have, that has been missing from some of the other movies in the series, is color. Batman Vs Superman was way too dark for its own good. And Suicide Squad might have had color in it, but it still felt dark as hell. There was nothing light or appealing about either one. Justice League is a little better. It still has director Zack Snyder’s artistic touch, but it’s as if Snyder’s work is seen through a filter (and Joss Whedon, who took over directing duties at one point,) is that filter. Whedon directed the first two Avengers movies. And while this film can’t even come close to competing with the first movie, it does fit a lot more along the lines with the second one… Avengers: Age of Ultron.

Both movie featured a villain that was so CGI over the top that he didn’t even look or try to look real. Which means that the movie is basically asking us to ignore that fact and get past it. And it’s a lot easier to do that here, with Steppenwolf, a guy who at least in many way resembles a human, than it was to do with the robot Ultron in that Avengers movie. Funny enough, the villain is one of the weakest parts of this film, simply because there’s nothing to him. In an age where a movie is only as good as its villain, and where the motivation of the villain is essential to the plot, this one drops the ball with both. The first time I saw Justice League, it was right after I saw The Avengers: Infinity War, and I couldn’t get passed thirty minutes of Justice League before declaring it “unwatchable.” It’s not. It’s just a campy, B movie that requires you to go in with no expectations. Avengers: Infinity War, on the other hand, featured one of the greatest superhero villains, (and motivations,) of all time. So going from that movie to this one, explains why I couldn’t get through this. But it’s not as bad as all that.

The movie starts out with showing us how the events of the last film (Batman Vs Superman,) have reshaped the world. Just like the way B V S began with showing the ramifications of Man of Steel, (the skyscrapers falling down all over Metropolis,) this movie begins with showing what the death of Superman means to the people, and how hard they are taking it. We see black flags with the giant S waving in various locations, see flowers being dropped on graves, and see statues that have been torn apart. All to the tune of the song, “Everybody Knows.” It’s a nice, artistic way to start.

From there, we see Wonder Woman in her opening scene, saving a bank from a group of high tech robbers and killers. This has nothing to do with the story, but its a nice way to introduce Wonder Woman and give her an action scene right off the bat. There are also some cool moments in it, like one where a guy tries to maul down a crowd by pumping bullet after bullet into them and Wonder Woman slides in to deflect every one of those bullets with her arm bands. The scene works from an action stand point and nothing more. And that’s enough. In fact, in many ways, it’s the story of this movie.

Then we start meeting the other characters. Aquaman, as played by Jason Mamoa, is fun. He doesn’t hide the fact that he loves drinking and doesn’t really care about anything other than being a hero. He saves people because he likes the respect it gives him, and nothing more. And Cyborg is a character who you will either love or hate the look of. His face is lit up by both red and blue lights, and the combo is a little jarring at first, but then you come to know the character and don’t mind so much. By the end of the movie, his look grows on you so much, it’s one of the better looks of the film. Cyborg is the brooding character, (which maybe explains why Batman can’t be here.) And for humor, we have the Flash, as the youngest character on the team. Not that’s especially funny, but at least he gets points for trying, and for being quirky in the process.

The story isn’t much more than trying to stop Steppenwolf from collecting these mother boxes (a macguffin if ever there was one,) and the parademons, or minions that go with him. While Steppenwolf is a lousy villain, he does give us some cool action scenes. For one, we get to see him capture each of the other mother boxes, and while the under water sequence, in Atlantis is unimpressive, the one where he takes on the Amazonians (Wonder Woman’s people,) is pretty great. This character is out for blood, and the movie doesn’t hold back on showing us that. All with bright colors and beautiful backgrounds, of course.

So the action is good, and the story is pretty weak. But one thing that does work for the story is the way the characters try to bring Superman back. Everyone knows the Man of Steel won’t be staying dead, and will be coming back at some point, and this movie plays it smart to hold off on that until the second half. That gives us something to look forward to, and a nice change of pace for the story just when it is starting to get kind of dull. And we even get to see all of the other members of the Justice League square off and fight against Superman, (definitely a Joss Whedon addition, if you remember the work he did on the first Avengers film, having our heroes fight before they could join forces.) This movie is the first one in the DCEU since Man of Steel to start making some calculated moves. You know how that film showed us everything in the trailer, including the “surprise” villain Doomsday appearing at the end? Well, this one hides things and leaves story elements for surprises. It’s not a very smart film, but it certainly tries. And the action looks the best that it has in one of these movies in a long while. The combination of these things makes the movie kind of fun.