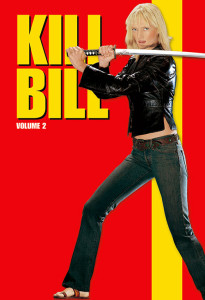 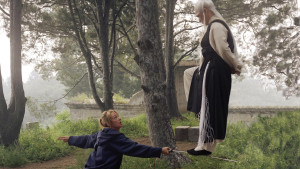 Not quite as action packed as the first movie, this film is more about the explanations and understanding and unraveling of the whole story.

An excellent film, this second movie is the one that really fills in all the cracks left by the first movie. If the first film just briefly told us the situation that led to The Bride going on her killing rampage with a list of names written on a pad, then this second movie explains and how and why it all happened. The film opens with the scene in question, where the Bride and everyone attending her wedding, were gunned down by Bill and his team of assassins. Then we continue with The Bride on her killing rampage, which carries on from the last film, but this time, the flashbacks reveal what happened before the wedding chapel murders. Specifically, we see Bill and The Bride together, back when they were a couple and learn of the Bride’s training with a legendary master, as well as of the moment when she decided to leave the business. All of these questions get answered as the Bride keeps going on her quest, going after new targets and crossing off more names from her list.

Kill Bill Volume II is an extremely satisfying conclusion to the two-part saga. For those who don’t really care for the first film, this one they will probably like a whole lot more. I’ll always remember when I saw both movies in theaters for the first time, I walked away thinking the first film was just okay, but loving the second movie. This is because the second film provides all of the answers and explanations. Now, over a decade later, the first film is the one that I appreciate much more, because of all of the artistry and remarkable music and choreography, whereas with the second film, I already know the answers, and know what’s coming, so it’s not quite as special.

It’s safe to say that the first movie combines kung fu and samurai fighting with a seventies blaxpoitation kind of vibe. The second movie, on the other hand, is nearly all American western. There is, of course, the one eastern culture, Pai Mei sequence, but other than that, this movie is all about the desert and Mexico. You can basically look at these two films like they cover the two biggest motifs in cinema, the east and the west. The eastern film (the first one,) gave us some scenes that rivaled the very best of Hong Kong action movies, (Go Go working that ball and chain was enough to compete with Jet Li doing a similar stunt at the end of Once Upon A Time In Chine II.) Speaking of which, there’s an homage to that movie here, with Bill (David Caradine,) and Beatrix (Uma Thurman,) sitting by a fire. He begins a story, by saying, “Once Upon A Time In China,” and then goes on to mention the White Lotus Clan, the enemies in that film. Just a nice little easter egg.

Kill Bill Volume II continues the fractured narrative storytelling that the first movie used, (as well as many other Tarantino films, most notably Pulp Fiction.) It begins with a black and white scene of the wedding rehearsal, which is the scene where the everyone in the Church, other than the bride, is assassinated. This is the scene that kick-starts the whole revenge story, and that we’ve heard so much about. We knew it happened, and saw the aftermath at the start of the first movie, with the two detectives walking up to the scene and looking over the bodies. Now we saw the events and moments that led up to it.

Taratino uses the opportunity to flesh out exactly what happened and who everyone is, very nicely. We especially get a sense of the relationship between Beatrix and Bill. The two of them were not only working together, but were also a couple, before Beatrix skipped town and went off to start another life with another man. For Bill, this really is his movie. He was barely in the first film, but here, he’s got the whole end to himself, this fantastic opening scene, and then a number of flashback scenes in the middle. He’s even got a scene with his brother, Bud, (Michael Madsen.)

Bud is the other great character of this movie. It’s him and Bill. Elle Driver, (the other person on Beatrix’s hitlist in this movie, played by Darryl Hannah,) is just okay. She’s got a cool moment where she rattles off some facts from a notepad, and a pretty awesome action scene, but other than that, there’s not a whole lot to her. Apparently she was Bill’s next in line romantic interest, and became his girl after Beatrix left, but we don’t really get enough of that story to make much sense out of it.

What we do get is a whole lot of scenes for Bud. We get to see him in his trailer, see him get a visit from brother, Bill, and see him go to work at a strip club, where he is the bouncer. We see Bud stroll in late to work, during this scene, and then get called into the back office by the boss, who ridicules him and pretty much fires him. Only Bud has one more job to do before he goes home, clean up a flooded bathroom toilet. It’s quite an introduction to the character. When Bill comes to visit, there’s a lot of talk about the Hattori Honzo sword that Bill once gave Bud, and that Bud says he pawned. And when they talk about Beatrix and how she’s coming for them, Bud says he doesn’t dodge guilt and that he and the others deserve to die. This is a pretty humble and noble guy. Or so it would seem. The truth is, everything that Bud presents to the outside world, from the sword, to his true feelings about what will happen if Beatrix shows up, is a lie. For these reasons, he is probably the most interesting character in the movie.

And Beatrix does show up at his trailer, in the middle of the desert, leading to some of the most unpredictable scenes in both films combined. If you think these movies are just going to be Beatrix going after each person, killing them one by one, and crossing names off her list, then starting with Bud, there are quite a bit of surprises ahead. Let’s just say, he gives her the biggest challenge of anyone. And he’s probably the last person you would ever expect to.

This movie does something that the first film did too, which is that it puts Beatrix in a situation that will take her some time to get out of, and then gives us a pretty long flashback to reveal how she is able to get out. In the first movie, the flashback is actually not related to Beatrix, but is the anime sequence of O-Ren growing up. The moment when we leave her, however, is with Beatrix in the back seat of a car, trying to will herself to move her body parts, one toe at a time. In Kill Bill: Volume 2, Beatrix is trapped under the ground and needs to escape. We see a flashback to her training with Pai Mei, a legendary old master, which explains how she would be able to get out. And then we see her escape.

The villain left for last, of course, is Bill, the title character. And he’s got a surprise for Beatrix, just waiting for her to show up. Tarantino doesn’t waste any opportunities to give us exactly what he wants, including a scene of a Mexican man (played by Michael Parks,) who was a father figure to Bill, and now provides Beatrix with directions. A major staple of Tarantino films is his dialogue, and his little speeches and stories that he has characters utter to inform others of things. Here, he gives Bill a great speech about Clark Kent and Superman, and how Superman taking on the guise of Kent would have been like Beatrix taking on the guise of a married woman working in a record store, when really she was capable of so much more. Tarantino puts his own spin on the story, though, not just relating it to Beatrix, but also comparing Superman to all other superheroes, (Batman, Spider Man,) in terms of the way his real self is super man and his alter ego is Kent, not the other way around. It’s some pretty cool analysis.

The final fight could have been a little more climactic, but I think at that point its more about the philosophy and the storytelling then it is about the action. I like the way we get to see a flashback to the job Beatrix was on when she realized she could no longer continue with this lifestyle. This movie serves as a fantastic second half to the first film, really filling in the cracks to provide us with answers and explanations. A little more action might have been nice, but the first movie had more than enough action for two films, so its okay. In this one, the kung fu showdown in the trailer and the Pai Mei training sequence are two of the highlight scenes. And both had their counter parts in the first film. Pai Mei here was represented by Honzo, the old Japanese swordmaker, there. And the showdown in the trailer is meant to be compared to the showdown with O-Ren in the Japanese tea garden. The scenery is about as different as you can get, and that’s kind of the point. Tarantino covers both ends of the spectrum, and he uses the two movies to reach out about as far as he can, and really make this story complete.