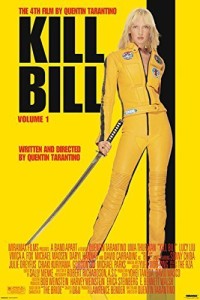 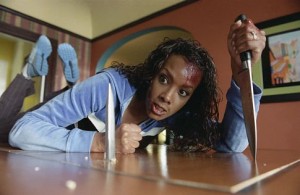 A near perfect action and revenge movie, this one has got it all, from fantastic storytelling and dialogue to wonderful martial arts choreography.

A movie that works on all kinds of levels, this film is a tribute to seventies Hong Kong martial arts revenge films. It is especially insprired by the Bruce Lee movie Game of Death, (Uma Thurman dons the same yellow jumpsuit as Lee did in that film,) about a man out to get vengeance on the killers who left him for dead. Tarantino takes that idea and works wonders with it in this movie. The music, filming, and action are right on the money. And as always with a Tarantino movie, we get great characters and snappy dialogue. This movie is fast moving, adrenaline pumping, and a whole lot of fun.

Kill Bill is one of those movies that is so masterful in every stroke, that it’s hard to even know where to begin when describing it. We’re talking about the action, the filming, the music, and of course the characters and dialogue. This is absolutely one of Tarantino’s best. For any other filmmaker, this would be hands down the top achievment on the resume, but with Tarantino, it’s a tough ladder to climb, and Pulp Fiction will always be the reigning champ. Still, this movie has a lot of fun with a revenge story that represents an ode to classic Asian Hong-Kong martial arts and samurai movies. It’s a modern take on that kind of film, featuring mostly American characters in a murderous plot.

In Pulp Fiction, there’s a scene where Uma Thurman’s character tells the John Travolta character about a TV pilot she filmed, where she and a bunch of other women were part of a spy team. Each woman fit an archetype and had a special weapon. There was the black one, the Chinese one, the French one. This group, the Fox Force Five, as they were called, became the Kill Bill movie. Apparently Tarantino and Thurman started talking about this film, while they were making Pulp Fiction, and began to ochestrate the little details. They knew the movie was going to open with a shot of a woman’s face, bloody and beaten, and that she was going to be wearing her wedding dress. From there, they began to call her The Bride. And just like that, a fire was lit in Tarantino that he kept in the back of his mind, burning. And after he made Jackie Brown, this movie was next.

Kill Bill is actually two films, a part one and a part two. It’s really only one complete movie or story when watched together, but there are plenty of movies that do that very same thing, often in trilogy form. You can’t watch the Lord of the Rings movies or the original three Star Wars films and think that there is any real resolution until reaching the end of the third film in the series. You can’t leave a movie with Han Solo frozen in carbonite, for example, and think that its the end of the story. So the fact that the first Kill Bill film doesn’t quite have an ending is not really a problem. And it does have a climax, which is really a lenghty and elaborate action sequence involving a whole army of soldiers being torn down in a massive samurai fight.

But long before that, we open the movie in a chapel, as the trigger is being pulled on The Bride, (Uma Thurman,) and she is shot in the head. Somehow she survives, and the next thing you know, we are with two police detectives pulling up to the scene, investigating. One of these detectives is played by Michael Parks, and he is reviving the same role he played in the Tarantino-penned movie From Dusk Till Dawn. Parks is just great in this role, even if he only gets one scene with it per movie. He also played the role in the Tarantino / Rodriguez movies Death Proof and Planet Terror, part of their Grindhouse collaboration. Here, Parks uses his one scene to discover that the Bride is still alive.

From there, we see her pull up to a Passadena house in a nice, residential neighborhood, ring the doorbell, and begin fighting with a pretty regular-looking homemaker and housewife. This would be Vernita Green, (Vivica A. Fox,) a former member of the Deadly Viper Assassination Squad that The Bride was also once a part of. Green and a number of other members showed up to the chapel where the Bride was getting married and murdered everyone inside. This movie and the next one are about The Bride seeking revenge.

The action scene inside of Green’s house is quick, but its pretty great. The colors pop with vibrance and the setting is so out of place for what these two characters are doing that the comedic element definitely punctuates every scene. Especially a shot where the two of them stand in front of a living room window, overlooking the entire neighborhood street, and the two women take their stances, each weilding a giant knife. And then to cap it all off, a school bus pulls up to the house, and a little girl gets out, with the women in plain sight through the window, holding their knives.

When The Bride leaves Green’s house, she takes out her kill list, and we see one name above Green’s, already crossed out. That name is O-Ren Ishi (Lucy Lieu.) We will see more about this character in an anime sequence that comes later. First, we flashback to the aftermath of the chapel murders, with The Bride now in the hospital. There’s the woman who comes to kill her, and then the scenes of The Bride waking up from her coma, getting into a car, and trying to will herself into being able to move, one body part at a time.

Now comes that anime sequence showcasing the back story on O-Ren, from how she grew up, and watched her parents murdered by vicious gangsters when she was just a kid. The anime here is fantastic. It really fleshes out O-Ren as a full character. I only wish a little more about her Chinese-Japanese American heritage was explained. Which parent was from where? How did they meet? Understandably, the movie is more interested in the exciting elements of a character, and so the heritage is really only discussed in a scene where a man insults O-Ren and she collects his head.

After the anime sequence, we travel with The Bride to Japan. Two things will happen here. First, she will go to Okinawa, where she will spend time with a samurai swordsman, (Hattori Honzo, played by the great Sonny Chiba,) and then she will go to Tokyo to take on O-Ren and her army, the Crazy 88s. Now consider that all of this is supposed to have happened before The Bride showed up at Green’s house, since O-Ren’s name was already crossed off of The Bride’s list. That means the sequential order would be the hospital, Japan, and then Green’s. You have to love Tarantino, splicing up the narrative to make the audience think. He did it flawlessly in Pulp Fiction. It’s a little more clunky and gimmicky here. For example, seeing that O-Ren’s name is already crossed off the list at the start of the film tells us what’s going to happen later, when maybe we should have been kept more in suspense. But the action sequence that gets us there, in that Japanese restaurant towards the end of the film, is absolutely fantastic. The scene of a henchman (woman) dressed in a school girl outfit, swinging a ball and chain, for example, is better than any sequence like it, (including Jet Li using one at the end of Once Upon A Time In China II.)

Kill BIll Volume 1 is a pretty excellent movie. It doesn’t tell a complete story, and that is very intentional in order to not have to cut half the film out just to fit a reasonable running time. But what we do get hear is state of the art in action and music and amazing shots. The dialogue usually works, (like the Hattori Honzo scenes,) but sometimes it is a little silly in order to give it that seventies homage kind of vibe. Still, as a revenge story with characters who are like guardians in a videogame, this one is pretty excellent. In the case of O-Ren, in particular, having to go through her entire army just to get to her, and then a standoff fight in a Japanese garden covered in snow is artistic as hell. This movie works on so many levels. Tarantino has alway had great soundtracks to his films, but this one is absolutley one of his best, with music that has become iconic in the decade since the movies release, (much like the music of Pulp Fiction did.) This is some of Tarantino’s very coolest and very best work.