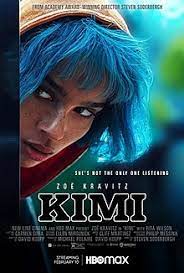 A pretty entertaining throw-back movie to the mystery-conspiracy genre, this one is Rear Window meets the Conversation, and is definitely meant to feel like Hitchcock updated for the furure.

Director Steven Soderbergh is trying his hand at a familiar story, now told with a low budget and futuristic setting. The familiar story is about a character who uncovers something that she was never meant to see, and now has an organization after her. And despite us having seen this story told in the future before, in other movies, this one feels different. That’s because of the low budget and way that this movie utilizes commentary on our society, including the Covid Pandemic and an Alexa-like device called Kimi. The main character here barely leaves her apartment due to agoraphobia, making this feel like a modernized version of Rear Window, and despite that limited setting the movie still moves at a quick pace. It’s a familiar story told from a new angle, and it definitely works.

Kimi is a movie about a woman who has agoraphobia and is terrified of leaving her own home. There’s a lot that has contributed to that including an attack she experienced, the Covid Pandemic, and her job, which allows her to sit and work at her computer at home, all day long. This woman is Angela, played by Zoe Kravitz, and her job involves an Alexa-like device called Kimi that people speak to in their homes and that records conversations. Some of the opening dialogue of the movie involves the CEO of the company that makes Kimi talking about how it is like and also unlike both Siri and Alexa. And mentioning those two products by name is an interesting move, because now instead of the movie being in a completely fictionalized world where this Kimi is meant to be one of those devices, only they couldn’t use the real name, this movie is telling us no… those devices do exist in the world of the movie, and this is actually our world, and Kimi is just the next one.

The CEA Brad tells the interviewer that the reason why Kimi is different from those other products is because instead of an algorithm figuring out what to respond to anything a person speaking to Kimi says, this device has real people actually listening in. Once we see Angela in action doing her job, we realize what he means. What Brad means is that any time there’s a miscommunication between Kimi and a user, it gets sent as an error to the company, and it’s the job of people like Angela to listen to the interaction between the user and Kimi in order to determine what the problem was. So we watch as Angela goes down a list of recordings and problems people had, listens in, and checks each one off, marking the reason for the error in communication, such as because the person used vulgarity.

While all of this is happening, and we are learning about Angela, her routines, and her job, we are also learning a little about her life. Specifically that there are two neighbors in the building that is directly across from her, who Angela has things going on with. One much more than the other. That one is a man who Angela sees from time to time, when he comes over, sleeps with her, and then goes on his way. The truth is, this man is trying to date Angela and see her outside of her apartment, only she is too afraid to leave. She want to, and tries to, and at one point we see her make plans to meet him on the street below their windows, and watch her get all ready, but by the time she gets near the door, she falls apart and can’t go through with it. The other man is some strange guy (played by the actor who played Buzz in Home Alone, and is now on a little bit of a roll, appearing in both this and Better Call Saul,) who sits staring out of his window, looking up at Angela, without her ever knowing it.

The story really starts to get going when Kimi listens to one recording that has incredibly loud music playing over it, and can make out the sounds of a woman calling for help and a man being rough with her. Kimi is not sure what exactly the recording is… there’s only so much you can tell from a few spoken words uttered over very loud music, but she marks it as a potential attack. She then sends it out to her higher up for review. He calls her back shortly after (nearly all the calls her happen through Skype, where we can see the person’s face to face interaction through video conferencing,) and isn’t too thrilled with Angela. He can’t believe that she would send him this, and be wasting his time with it, and tells her to delete it immediately. They are in the business of fixing errors with Kimi, not in listening to and reporting crimes as if they are the police.

Only Angela doesn’t do that. Probably in part due to what she has been through herself, with the attack, she decides to take this further. She has a tech support guy who she is in contact with who lives in Romania, and she gives him a call. This guy is always calling Angela, “hotness,” and the movie addresses that a few times, having Angela tell him to stop and that he is going to get in trouble if he continues to do that. The guy explains to her that where he is in Romania, “Me Too,” isn’t coming for another fifty years. This is all just social commentary and not really related to the plot. What is related, however, is that this guy is able to give Angela a code that will enable her to hack into the computer where the recording came from to see if anything else was recorded. Anything that wasn’t sent to Kimi as a communication error. Once she does this, Kimi witness a video recorded by the computer that shows a pretty horrific crime.

At this point, Kimi bypasses her boss tries to go straight to the woman in charge of security measures for her company. This woman is Natalie Chowdhury (played by Rita Wilson,) and Kimi attempts to call her multiple times. Each time, she speaks to Chowdhury’s secretary who tells her that Chowdhury is unavailable, and seems to be putting up a road block in order to prevent Angela from making contact. Eventually Angela tells the secretary what the call is regarding, and the secretary tells Angela that she needs to come in and meet with Chowdhury face to face. The secretary insists that once there, they will call the FBI and handle this situation. And so Angela is forced to leave her apartment, which we have already seen how difficult it is for her to do.

We are now in the final fourth of the movie or so, and this is where the movie suddenly reaches a new stage. So far, the entire film has been inside of Angela’s apartment. It has involved lots of phone call interactions, and very little face to face interactions (not counting the Skype ones,) and in those ways, this feels kind of similar to the great Tom Hardy movie, Locke, where a man spent the entire movie in a car having speaker phone conversations with people, and trying to diffuse conflicts. That was an experimental movie, and surprisingly effective. It was completely unique and different in every way. Here, the movie definitely feels like something we’ve seen before, only not for a long long time. There are some strong Rear Window vibes here, with that classic Alfred Hitchcock movie being about a man who was stuck in his apartment looking out the window for the entire film, and witnessing what he believed to be a murder. And then there was also the movies The Conversation, Blow Up, and Blow Out, from the sixties and seventies, all about taking a photo or recording sound only to look at it afterwards and realize that what sounded like a murder was also being recorded in the background.

When Angela goes to see Chowdhury the start of the climax begins. Now things are really heating up. The interaction she has with Chowdhury is fantastic, with Chowdhury wanting to listen to the recording along with Angela and Angela refusing. Not before the FBI is called. At that point Chowdhury brings up Angela’s past mental health situations. When she can tell that Angela won’t budge and won’t be bullied into dropping it, Chowdhury tells Angela that she’s going to call the FBI and leaves the room. Angela sits there waiting, believing this woman is doing what she is saying, but then she gets a call from her tech guy, Romanian contact, who has noticed that the recording has been deleted from the Kimi server (luckily Angela made a copy of it, which she has on a flash drive.) At that point Angela leaves the office and goes on the run, with two hitmen following her.

If the movie seemed tame and calm up until this point, in the final act, this thing definitely reaches new heights. The hitmen pursuit is a long one. It includes chases through all different areas, including a crowded protest, where Angela is caught by the hitman and forced into a van. How she escapes is pretty impressive. And it continues all the way to her apartment, where a couple of key factors that have been woven in throughout the movie, now factor in. The ending is definitely exciting, climactic, and satisfying, and it helps punctuate an already interesting film.

Kimi is a Steven Soderbergh directed movie, and that’a saying something, right there. Soderbergh is the ultra-artistic director who has managed to make both big budget films (all three Oceans movies, not to mention Traffic and Out of Sight,) but also quite a lot of indie movies, from Bubble to Full Frontal. With Kimi, Soderbergh is showing that he can take a well-known story (there have been tons of movies like this, including one that premiered on Netflix just this week called The Gray Man, with an immensely higher budget,) about an individual who uncovers something that is top secret and then spends the rest of the movie being chased by assassins who want it, and update it with a futuristic setting. Now, we’ve seen that concept set in the future before too, from Enemy of the State to Minority Report. The difference here is that Soderbergh is doing it with the smallest budget he can. He’s showing that this story doesn’t have to be used for a massive action movie, and can instead be used for a Hitchcock-like thriller. And he even uses Hitchcock-like music, whenever Angela is unconscious sleeping, to really drive that point home. It’s an entertaining movie, but not incredibly memorable, since it does, after all, cover familiar territory. Still, like Locke, this movie gets a lot out of just how low-key it is, taking place mostly in Angela’s apartment, and scaling back the action in favor of focussing on the future job and technology that this woman has at her disposal. It’s interesting and well-done, without being anything that really stands out as exceptional.