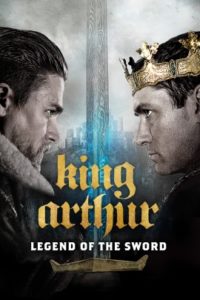 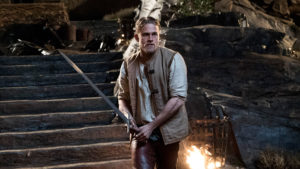 A gritty, bleak take on the legend that wants to be like 300, but ends up overusing computer effects to the point where we just don’t care.

King Arthur: Legend of the Sword is not a very good take on the classic story. This is a movie that unfortunately shows how far director Guy Ritchie has fallen. Here, he relies entirely on computer effects to do everything, and it shows. Nothing looks or feels real here, and instead, we have computer effects dictating not only what characters do, but also the pace at which they move. The story is pretty basic and weak. A King evil brother had him killed, but not before the King could send his son away. Then one day, the son pulls the sword out of a stone, to reveal that he is the rightful heir to the throne. From that point on, it’s him versus the king. Occasionally there’s a fun scene or to, to be found her, but most of the time this one is pretty much a dud.

King Arthur: Legend of the Sword is the Guy Ritchie take on the classic story. Ritchie, of course, is the British gangster filmmaker who made it big in the nineties and early two thousands with movies like Lock, Stock, and Two Smoking Barrels, Snatch, and Rock N Rolla. He hasn’t really made a good movie since then, and King Arthur is no exception. It’s a story that has been told almost as many times as Robin Hood, which means we’ve gotten a different version at least once in every decade, and this one is simply the most computer effects heavy take on the story.

For King Arthur movies, one might look at this one as the version that is the most action packed, but when it’s all computerized action and fake looking effects, it doesn’t really feel that way. Compared to other versions, this one falls somewhere in the middle. First Knight, the nineties version of the story starring Richard Genre and Sean Connery was the best of the bunch, and maybe that’s because it told a whole different story about these characters, (Lancelot and Guinevere were the protagonists and Arthur was a secondary character.) But there was also the eighties version, Excalibur, and the two thousands version, Clive Owen and Keira Knightley’s King Arthur. Al of these were forgettable.

The story that we’ve gotten again and again is about the legend of a sword in a stone, which was put there by Merlin, (who tends to be absent from most of these films,) as a challenge. Only the rightful son of the previous King would be able to pull the sword out of the stone, (even the first Thor movie told a variation of this story.) And then one day, the boy Arthur comes along, not knowing who his true father is, and pulls the sword out of the stone. Suddenly everyone knows he is the rightful King. It’s a pretty basic, and simple story, which probably explains why most of these movies have not been very good, (and the film that doesn’t even bother to tell the story of the sword in the stone, First Knight, is the best of the bunch.) But King Arthur: Legend of the Sword most certainly does tell that story, and it’s not very good.

This time around, Arthur is not a boy, but an adult, spending his days living at a convent with a group of friends who he grew up with. He’s an anti-hero, rebellious type, and he’s enjoying his situation, living here, when he’s captured by the guards of the King, (Vortigern, played by Jude Law,) and becomes a prisoner / slave. It’s here that Arthur ends up pulling the sword out of the stone, and it’s incredibly anti-climactic. No attention is given to why he would be pulling the sword from the stone, (other than that the guards challenge him,) or why the stone with the sword in it would happen to be right where the slaves were working. Luckily, the movie has more going for it than just this story.

At the opening of the film, we meet Arthur’s father, Uther, (played by Eric Bana,) during a battle. He’s the king of the land, and leads his forces against those of an evil sorcerer. Uther has some great moves here, like one where he jumps across a giant pit and then scales the walls of a building, with fighting going on all around him. It might be all CG effects, but it’s still one of the best looking and more interesting action scenes in the movie. Uther ends up saving the day and winning the battle, but he soon learns that there is a plan to overthrow him and kill his family going on inside of his kingdom walls.

At this point, Uther tries to get his family out to safety, but only somewhat succeeds. His wife is killed during the escape. Uther does manage to send his son, Arthur, off in a raft, (not unlike the baby Moses,) but then he turns around and fights a giant skeleton creature, and is killed. And then we see, behind the scenes, that it was Vortigern who ordered the assassination. Uther’s brother has his own plans of how to become King, and they include visiting a serpent in the water, who rises to the surface with three humans attached, who the serpent speaks through in order to give Vortigern advice.

And now, we jump over twenty years to meet Arthur as a man, (played by Hunnam,) and follow his story. Once he pulls the sword from the stone, Arthur becomes public enemy number one in the King’s eyes. Vortigern is one of the most evil Kings imaginable. Not only does he kill his enemies, and even his own brother, in order to get ahead, but he actually sacrifices his own wife and child. Early on, while plotting against his brother, Vortigern sacrifices his wife, while down in the dungeon. She wants to know what’s going on, and he responds by giving his a knife to the belly. And then, later on, he does the same this to one of his daughters.

Arthur, meanwhile, is rescued from the King’s dungeon by a group of rebels who oppose the King. This group includes two men who fought side by side with Arthur’s father at the start of the film. There’s Bedivere, (played by Djimon Honsou,) and Bill, (played by Game of Thrones’ Aidan Gillen.) The group also includes a Mage, or sorcerer, who sees into the future to determine that Arthur can and will claim the throne, so long as he follows the right path. And that path includes going into the woods and taking on a number of beasts, in order to come out fully capable of being able to use this sword. Sadly, these scenes aren’t as cool as they sound, and none of the beasts is really shown, or is anything special.

And by the end of the movie, it is Arthur and his group of friends and followers taking on the King and his men. The problem is that the computer effects are so heavy handed that nothing feels even remotely real. A number of times with the action, it’s tough to tell if there are real people fighting, and even if so, they are most certainly not moving at the pace that the movie has them moving at, (which is where the speeding things up and slowing them down comes in.) This just can’t compare with movies that do the fighting for real, (such as Braveheart or Gladiator,) or even movies that do use computers, but at least go to great pains to get the choreography right, (such as 300.) With this movie, nearly everything is done in the computer, and it shows.

There are lots of problems with this movie, and one of them is most definitely the story. It’s weak. There’s no romantic angle here at all, and on top of that, this amounts to little more than a simple revenge story. The King wants Arthur dead and Arthur wants to take his position on the throne. That’s about the extent of the plot. It’s also the reason why the opening scenes stand out as some of the best in the movie. Those are the ones where we don’t know what’s going to happen or where the movie is going. Once Arthur pulls that sword from the stone, however, the rest of the movie becomes pretty simple-minded and predictable.