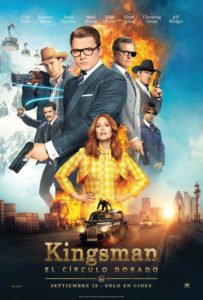 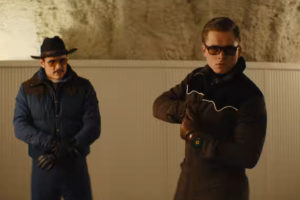 Not quite as cool as the original film, this one still has a lot to like, including great action and comedy, but the originality just isn’t there in quite the same way.

A pretty worthy sequel, this one definitely isn’t as good as the first movie, but not many sequels are. What the movie does have going for it are some very fun and exciting action scenes, and some pretty decent comedic moments. The story does a nice variation on the key parts of the original movie, without repeating them. Instead of mindless zombies that the masses are turned into, this time they contract a virus which paralyzes them until they die. The villain isn’t nearly as much fun as the Samuel L. Jackson character in the first movie, and the same goes for the henchman. Instead of metal blade legs, this henchman has a robotic arm. There are lots of things like that, which reference the first movie, and none of them are really better than what we got in the original film (except for the one sex moment, which this time takes place at a music festival.) But the action is fantastic and the inventions and ideas by director Matthew Vaughn are fantastic. It makes for a pretty fun experience, even if it is a little too long.

Kingsman: The Golden Circle is good. That shouldn’t be much of a surprise considering the film’s director is Matthew Vaughn. This guy, like Tarantino and like the Coen Brothers, can really do no wrong.  Vaughn has made Layer Cake, Stardust, Kick Ass, X-Men First Class, and Kingsman. All of these were terrific.  He’s succeeded where other filmmakers haven’t, (just look at Kick Ass compared to Kick Ass 2, or the way his X-Men First Class relaunched the series.)Vaughn is a man who knows action and comedy and is a wizard at utilizing computer effects so that they never look like over the top drawings. Instead, his effects are used to enhance the action, often putting scenes into slow motion just so that we can see more.

With Kingsmen 2, we get an incredibly long film (two hours and twenty minutes,) that is packed with action, characters, and quite a lot of stories. On the one hand, it feels too long. On the other hand, there isn’t a whole lot that should have been taken out. Every scene seems to have a purpose, and most of the time that purpose is to push the plot forward. And sure, there are scenes that don’t always effect the plot, (like Eggsy going to meet his girlfriend’s parents at the start of the film,) but they all entertain us one way or another.

The movie is about a new terrorist who is also a drug kingpin. Her name is Poppy, (played by Julianne  Moore,) and she is upbeat and friendly and full of smiles until she is betrayed by someone. Then, she shows no mercy. She lives in a candy land like Fifties era town she created, in the middle of a jungle, and everything about this is funny and campy. So is Poppy’s carefree attitude about life. She doesn’t like when people lie to her and do things behind her back, but otherwise she seems pretty happy with the people she comes across. Poppy doesn’t like that the US government considers her industry of selling drugs to be a huge crime, and wants to be welcomed in the country as a prominent businesswoman, as opposed to having to hideout in Asia.

When Poppy does get betrayed by one of her men, she sets robotic dogs after the guy. These things are extremely cool and ferocious and they do their job. But then the movie gets kind of gross. She grounds the guy up into a pile of meat. Then she turns the meat into a bloody Paddy and cooks it on a grill. And then for the worst part… she makes a guy eat it. This is pretty stupid and gross, but it’s one of the only real missteps in the movie, and so we forgive it and move on.

Thankfully this is an action movie more than it is a comedy, and Vaughn really does have a way with effects and computer technology. He starts and slows down action scenes at whatever pace he wants, and he really gets the most out of every moment. The movie opens with a fight inside a car where a guy with a metal arm uses his hand to block bullets and stop a car, (while he’s inside of it,) by grabbing onto the street. And we go straight from a fight action scene to a car chase action scene, with all kinds of cool gadgets. With all this happening, the movie definitely gets off to a great start.

And it stays there for a while, with the blowing up of the Kingsman’s headquarters, the date that Eggsy goes on where he meets his girlfriend’s parents, and the feeling of betrayal that exists between both Eggsy and Merlin, (Mark Strong.) After the explosion, and deaths of some beloved characters from the first film, both of them suspect each other. They get passed it, and check out a safe that has emergency protocol instructions  Only when they open it, all that’s in the safe is a bottle of whiskey. They drink it, over some sobs, and get properly pissed before seeing that there’s a message on the bottom about a company called the Statesman, which is in The United States.

So now we head to the U.S., where Eggsy and Merlin have to fight Tequila (Channing Tatum,) before they meet the big boss, Champagne, (Jeff Bridges.) When Poppy activates the virus that makes blue veins appear on the necks and faces of all those who have been using her products, Tequila falls ill and is pretty much taken out of the movie. Between that and Champagne, (mostly called Champ,) only having about two scenes, it would have been nice to get some more of these guys. But Pedro Pascal (Oberyn from Game of Thrones,) is on hand here, as Whiskey, and he accompanies the Kingsmen on their mission to stop Poppy.

That mission brings them to a number of locations including a music festival, where they need to win over the bad guy’s girlfriend in order to plant something inside her, (yes, exactly what it sounds like,) and then to a top secret mountain lab in Italy, where the antidote is being harnessed. This is where the action pumps into full gear with a ski lift gone wild scene that turns into a take on the graviton spinning around, sticking to the walls ride, and then a shootout outside of a cabin. All of this is fantastic fun.

There aren’t many downsides about the movie, but one is certainly that the film feels long. Considering the plot of the Kingsmen getting blown up, then coming to America to find another team, and then taking on the villain (who gets her fair share of scenes of just her training her recruits)this film would have benefited from dropping one of it’s storylines. There are two that would have sufficed for this. The first is bringing Harry back, giving him amnesia, and having the characters spend time trying to bring his memories back. I have no problem with brining Harry back, but the amnesia plot got a little tiresome.

The other story that doesn’t quite work is the US President’s response to the drug-virus threat. His response is to just let the people who infected die, since it will mean less of the drug population. He even says, at one point, “we just won the war on drugs.” While this is very much in line with the villain motivation of the first film, (Sam Jackson’s character planned to get rid of a significant amount of the earth’s population,) here it is kind of rushed over. For example, at one point we suddenly see a huge sports arena filled with cages stacked on top of each other, with infected people inside of them. This internment camp kind of situation is never introduced or explained. So these are areas where the movie could have been improved, but ultimately it’s a pretty good film. It delivers on action and comedy, and while the villain isn’t as great as in the first film, at least she does have a reasonable motivation (to be let back into the country and considered a real businesswoman,) just like in that first movie. This movie might not be as great as the original film, but it definitely works.