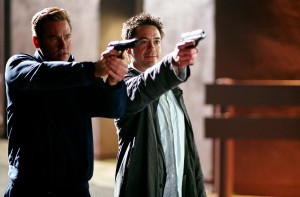 A fun, yet confusing movie mystery / black comedy, this movie works to a certain extent, even without fully understanding all of the twists and turns.

This is a pretty cool action movie / noir mystery with a terrible title. aside from that and how the plot reaches some confusing levels at times, it’s pretty terrific. there is wonderful humor here by robert downey jr. who plays harry lockhart, a robber who stumbles on a movie audition and gets whisked off to los angeles to be in a film. the movie takes us through his experience in l.a., including two different mysteries that he gets himself involved in, which just might be connected. this is a black comedy that delievers on nearly all levels. the humor is great, but so is the mystery storyline. everything makes sense in the movie, things just get a little tough to follow at times, due to how many characters there are, and in particular three woman victims who seem interchangeable, and might actually be posing as each other. other than a little confusion, however, this is an excellent film.

Kiss Kiss Bang Bang is a pretty cool movie with a terrible title. it’s one of those titles that wants to be cute and pretend that it’s really smart so that if you don’t get it, then you are the one who’s dumb. only it’s really just a dumb title. thankfully that movie is pretty good. it’s a film noir about a slacker who gets involved with mistaken identity and is suddenly playing detective and trying to solve a case. those ideas make it sound a little like the big lebowski, but unlike that movie which took the premise and went running for comedy, this one uses it for more a crime thriller with the comedy sprinkled in.

the movie stars robert downey jr as harry lockhart, a low down thief who somehow ends up at a hollywood pool side party. when we meet him, he is walking around the pool, looking very out of place. downey narrates the movie and his voice over takes us back to how he got there. we even get a screen title that says, “how harry got to the party,” which is a funny joke, because it’s like his narration can do whatever it wants. in other moments, it freezes the screen to go back in time in order to show us things he forgot to mention. this is director shane black being witty with standard hollywood rules and going a different way. i’m surprised there was never a moment in the film where harry’s voice over said, “let’s see that again,” and the images went into rewind mode.

we see harry before the party, working as a local thief in new york. he’s at a toy store, robbing the place at night, while on the phone with his kid, asking questions about what toy the kid wants for christmas. this is funny stuff. he’s not robbing the place for money, but for a specific toy. when the alarm goes off, harry goes running and gets chased by the police. he ends up running up some stairs and into a room where casting directors are holding auditions. harry stumbles in right at the moment when they are ready to see him, and he reads for them. and because harry is so nervous about what just happened at the store, he gives an emotional reading that is incredibly powerful. this early scene is what really sells the plot. watching harry deliver these lines, we can really believe that the casting directors wanted him.

and so they send him to l.a. to meet the producers of the film and start giving him lessons in being a detective. at the party, harry meets a girl named harmony, who has a creepy guy standing over her while she is passed out. harry gets into a fight with this guy, as he tries to be the hero and talks tough, but actually doesn’t know how to fight at all. we get a flashback to see how harmony got to the party, and then we are meeting gay perry, (val kilmer) the detective who has been assigned to train harry for the movie.

harry goes to find harmony at a bar where she is working and talks to her a little, learning that the two of them knew each other as kids. the movie began with a scene of the two of them performing magic tricks, and now here they are as adults with a lot of history. apparently they were friends all throughout high school and harry always wanted her, but she treated him more like one of her girlfriends, as someone to tell secrets to.

the real mystery starts on day 2. this movie uses screen titles to tell us what day it is, and that’s helpful in keeping track of everything that is happening. but it’s still not enough. day 2 is really like night 2, as it begins with harry and gay perry following a man to his cabin. i believe this man is harlan dexter (played by corbin bernsen), who is also the head producer of the movie harry might be in. dexter is the man who’s party everyone was at the night before. perry might be working for dexter to train harry, but he is also working a side case that calls for him to be following dexter. this is getting confusing already.

while harry and perry are tailing dexter and have lost him, they pull off to the side of the road to talk about where he could have gone. that’s when a body comes flying from a car on a ledge above them, and lands in the water. harry and perry run into the water to pull out the body, but it’s too late. the girl is already dead. now we have a mystery. two hitmen stand on the ledge and see harry and perry, and suddenly they are the new targets.

things start to get really tricky to follow when harmony shows up at harry’s door thinking he is a detective and asking for his help. she has a mystery that needs solving too. her younger sister has disappeared. she’s the same age as the girl they pulled from the river. but then again, so is harland dexter’s daughter. then there’s another girl, in a pink wig (shannyn sossaman), who is posing as dexter’s daughter. there are three different girls, all the same age, and all end up dead. the question is who is who and why were they all killed and what exactly their involvement with dexter was.

the movie handles this mystery pretty well, giving us clues and scenes of the stars trying to put the pieces together. we also get plenty of humor. in one great moment, harry is standing at a toilet urinating when he sees a dead body on the floor behind him. he quickly spins around and ends up urinating on the body. now he has questions for perry about whether or not the cops can trace his dna from the urine.

as the movie goes on, clues come together and we get a number of scenes where henchmen come after our stars. the movie isn’t afraid to get dark and violent with it’s killing and some of that is played for laughs in a very black comedy-like way. the first half of the film is more about comedy and setting up, and the second half is where the action comes in. this movie has a lot going for it. the mystery might be a little unclear at times, but it’s still thrilling. and the action and comedy are both pretty great. this is the perfect role for downey jr, just like his iron man persona tony stark. he’s a tough talking wise guy. for shane black, this was the first movie he directed (he just made iron man 3), and he does a pretty great job.